New York City is not a place 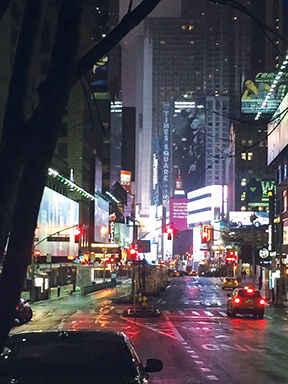 Times Square is crowded with college students in attendance for the Collegiate Media Conference in.

Over spring break, The Sunflower gave me the opportunity.

My official business in New York was a collegiate media conference. Jessica Green, Evan Pflugradt, Emily Maslow, and I, all members of The Sunflower staff, and Jessica Bertapelle, our faculty advisor, spent part of our spring break together at the Sheraton Hotel in Times Square for the College Media Association’s National College Media Convention.

After a three-hour drive to Kansas City and an almost three-hour flight, we finally touched down at LaGuardia airport in New York City. I began seizing mental images and stowing them away for later use.

I could fill notebooks with the descriptions I gathered: the sheer scale of the city, its looming skyscrapers, the glaring glass and steel goliaths, taxi-cars pulsing through midday Manhattan shadows, business-clad pedestrians pausing for crosswalks, steam rising from manhole covers, street venders, meats on sticks and the subway vibrating the sidewalk, a city below a city.

We spent our mornings and afternoons in informational sessions and spent our evenings roaming.

Our first night in the city, we walked Times Square. Costumed Disney characters accosted small children for photos, a crowd of hundreds surrounded a full-grown man in a man-sized diaper with an oversized baby head mask, billboards dazzled across skyscrapers, and a band of men in kilts filled the square with music from their bagpipes.

We ate fold-in-half, brick oven pizza with wafer-thin crust and juicy strands of mozzarella cheese, and followed it up with hulking slices of New York cheesecake. By the end of the night, I drank four cups of coffee. (Sidenote for coffee drinkers: if you visit Times Square, know that it has only one public restroom, which is in the back of the biggest McDonald I’ve ever seen. And there’s a line.)

Our second day in New York we made time to visit the 9/11 Memorial Museum, located at Ground Zero. I remember watching the World Trade Center buildings fall in real-time at school, but when something is on TV, it’s never entirely real. Standing on the bedrock in the shadow of where the towers fell, for the first time the terrorist attacks of 15 years ago felt entirely real and immediate.

That night, we caught a ride to Chinatown. We walked past sacks of salted fish on the sidewalks and roasted chickens hanging in shop windows. We ate an assortment of appetizers and entrées at a Chinese restaurant called Mission. The menu was vague and our meals were expensive but delicious.

Our last night there, we took a boat cruise around the city, but it was raining. The boat had a buffet and a dancefloor, so it all worked out and added a dimension of beauty seeing the Statue of Liberty and the lights of the city out of a rain-streaked window.

I’ve been back in Wichita since Wednesday. I’m still affected. The food, the buildings, the museum, the traffic — you’re there and then you’re gone and it seems like make believe.

Since I’ve been back, I keep getting the same questions from people who have never been: How was New York? What was it like?

To a writer, the word ‘indescribable’ is an affront, especially when the thing you’re trying to describe is the most famous city in the world. But I’ve been having a hard time coming up with a description to fill in the blanks of such an emblematic city.

New York City is not a place but an experience. Sure, it’s glitz and it’s hustle, but it’s also something else entirely.

What did I learn? I’m not sure. But I felt a lot of things. Feelings, I think, that are reason enough to go back.