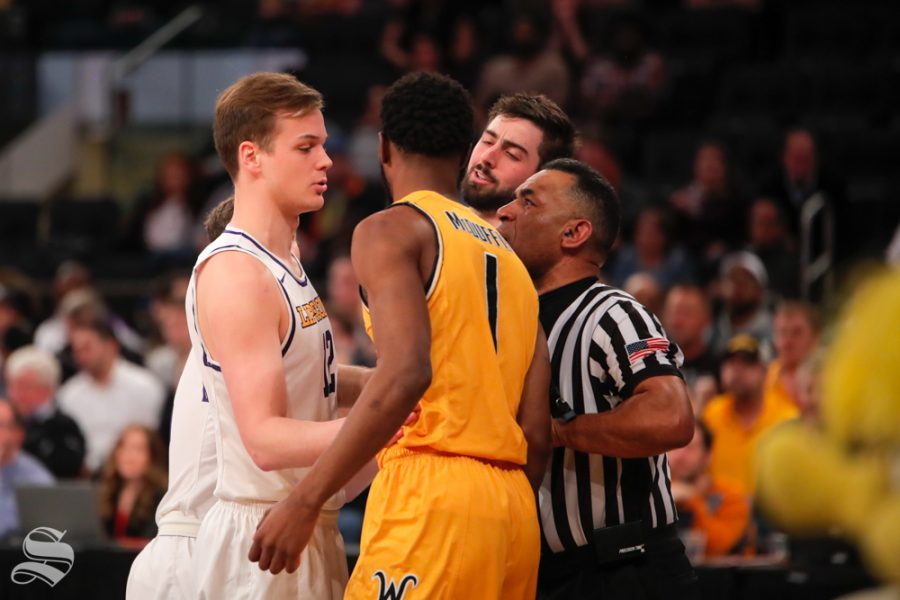 Wichita State senior Markis McDuffie exchanges words with Lipscomb forward Matt Rose during the second half of the game on April 2, 2019 at Madison Square Garden in New York. (Photo by Joseph Barringhaus/The Sunflower).

NEW YORK CITY — It didn’t take Garrison Mathews long before he was in the head of Markis McDuffie. Having the first man on the scouting report score 18 points in the first half will do that to you.

It certainly wasn’t long before Mathews, who put up 34 points in Lipscomb’s late win Tuesday, that he was in the head of every Wichita State Shocker.

He hit five 3-pointers. He scored 11 from the free throw line. He scored in flashes, and the intensity didn’t stop.

Frustrations came into full focus. It didn’t matter who guarded Mathews, he could only be slowed for so long. Then his quickness and shot-making ability pushed through. McDuffie, Wichita State’s spoken leader, took his shot and failed. He was so visibly frustrated that Wichita State Coach Gregg Marshall screamed from the bench.

“Do you want to guard him?”

Mathews cut an 11-point lead with 8:08 down to nothing. His dagger 3-pointer put the Bisons ahead in the final minute. The Shockers ran into a brick wall as the Bisons scored 14 unanswered in the final 3:45.

Wichita State thought it could keep the ball out of Mathews’ hands. Samajae Haynes-Jones stole the ball away from Lipscomb’s Nathan Moran, who was trying to get the ball into Mathews’s hands. Haynes-Jones raced the court and dunked the ball triumphantly.

Then Wichita State’s basket metaphorically shrunk to the size of a pea. The Shockers wouldn’t score again.

“We didn’t execute,” Haynes-Jones said. “They went on this run and we couldn’t stop them.”

The Bisons kept the barrage of scoring going. Moran and Mathews each hit 3-pointers, and it was tearing the focus away from the Shockers.

At a point, Wichita State’s Jaime Echenique and Dexter Dennis were chest-to-chest, jawing at one another — only separated by Haynes-Jones. It was a dead ball timeout, and Marshall had to calm Echenique. There was no longer the same cohesiveness the team had just minutes before.

“It was a hard moment for us,” Echenique said. “Each player was wanting to do something. Nothing was working and that turned to frustration.”

“He was open,” Dennis said after the game. “It was a heat of the moment type thing. That’s what flared it up.”

“I don’t like negative body language, but that did show,” Marshall said. “Their emotions spilled out there, and so we addressed it. That’s why I walked out there. If you guys want to do that, go somewhere else, we’re not going to have bad body language and show our frustration physically like that.”

Marshall said Dennis probably should have passed Echenique the ball.

Wichita State lost by seven points after holding an 11-point lead with 8:08 left. The game was reminiscent of a game in early January, where Wichita State had surrendered late leads. This team hadn’t done that in nearly two months, with wins against high-caliber opponents and victories in 14 of its last 17 games before Tuesday’s semifinal.

The loss stings, but Wichita State players are thankful to have had the opportunity to extend its season.

“We’re not going to be here next year, I can almost guarantee that,” Dennis said of the National Invitation Tournament. Shocker freshmen are hopeful the team will return to the NCAA Tournament after the program’s streak of seven straight NCAA Tournament appearances was broken this season.