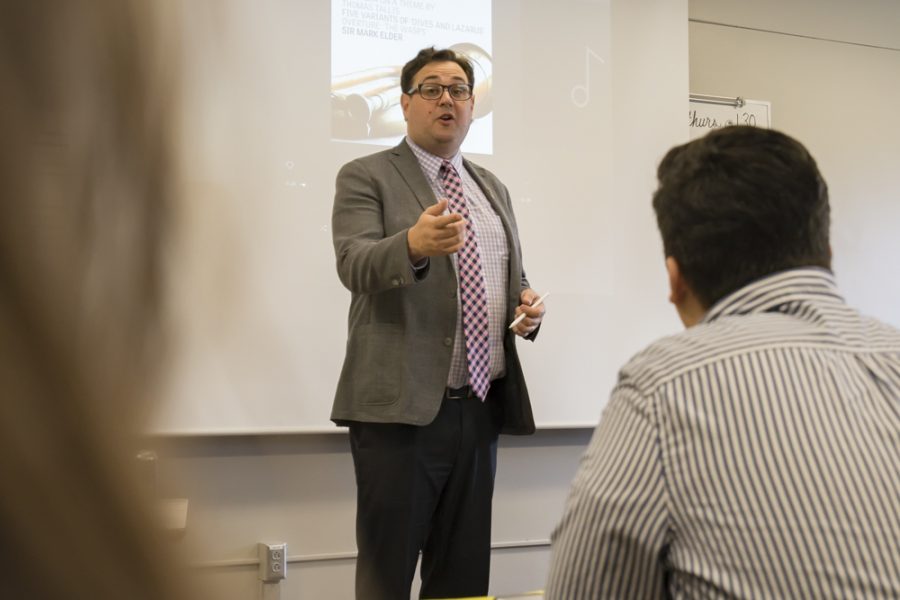 Aleks Sternfeld-Dunn, director of the School of Music, teaches his 8 a.m. aural skills class Tuesday. Sternfeld-Dunn has been a faculty member at WSU since 2011. He became director in 2018.

Aleks Sternfeld-Dunn was, by his own admission, a mess-up as a teenager. He didn’t use the word “mess-up” to describe his younger self — the one he used isn’t fit for print.

Sternfeld-Dunn grew up in the San Francisco Bay area. He was bright but unmotivated, and kind of a jerk, he said.

His hair nearly reached his knees his sophomore year of high school. He hadn’t cut it since the fourth grade, when his sister told him to grow it out. He wanted to pierce his ears, but his parents wouldn’t let him. So he rebelled in the ways he could.

“I didn’t know what I was doing,” said a shorter-haired Sternfeld-Dunn, now 38 and director of Wichita State’s School of Music.

Sternfeld-Dunn did have aspirations during high school, though. He wanted to become a circus clown.

He never got around to chasing that dream, but his attitude did leave him chasing something: a girl, Kristine, who he met in summer school between his freshman and sophomore years.

“I had a total crush [on her],” Sternfeld-Dunn said.

Kristine was in the high school marching band. Sternfeld-Dunn — who attended a private Montessori grade school that didn’t offer many music courses — didn’t have any marching band experience before high school.

But he had a different kind of band experience. He had picked up the electric guitar in middle school, and was in a punk band: Novacaine.

“Our slogan was ‘We’re so punk it hurts,’” Sternfeld-Dunn said.

So he had some musical experience when Kristen asked him to join the marching band, which was going to tour Canada the following year.

“I was like, ‘Okay, but I don’t know how to do anything in a marching band.’ And she’s like, ‘That’s okay, anyone can play bass drum,’” Sternfeld-Dunn said.

So he joined the marching band. And then he joined orchestra. And that’s when music started to become a possibility, thanks to a teacher who took a chance on him and taught him well, he said.

He and Kristen didn’t last, but they’re still good friends.

Sternfeld-Dunn had some catching up to do to meet the musical skill level of his peers, so he started teaching himself music theory. Not long after, he fell in love with composing.

“The idea of creating music for others to play . . . resonated with me really strongly, so I started doing that,” Sternfeld-Dunn said. And as he worked his way through college, he found a growing passion to teach.

“That felt right to me, so it just kind of coalesced in that way.” Sternfeld-Dunn met his wife, Emily, in a music theory class during his junior year of college at California State University East Bay. They’ve been married 15 years, and have two daughters — one of whom turns 10 today. The other is eight.

In his free time, Sternfeld-Dunn likes to ride his bike. That’s when he’s happiest, he said. And he recently picked the electric guitar back up. He noodles on it when he needs a break at work, or when he’s unwinding at home.

It’s a good hobby to have because there’s no expectation, like there is with composing, Sternfeld-Dunn said.

“If you go hear me play guitar, nobody expects me to be great. Having something that’s creative with no expectation is really nice, and it’s one of the ways I decompress.”

Sternfeld-Dunn has mastered the art of mixing professor-wear with personal touch. Both his ears are pierced now, which was the first thing he did when he turned 18.

“I’m corporate in some ways. Especially as the director I’ve got to be more shirt and tie, right?” Sternfeld-Dunn said.

He once had a colleague stop him in the hall to ask him, “What’s the deal with those earrings?”

He’s got earrings and two tattoos, always wears brightly colored glasses, and on some days, can be spotted in Converse high tops. But he said he’s jealous of some of the other faculty on campus, “who are way more punk rock” than he is.

On Tuesday morning at 8 a.m., he wore Captain America socks to his aural skills class. He taught the lesson using a Shania Twain song. He dissed Spotify. He jammed out a polka rhythm on the piano as his 15 students bobbed their heads. And when Spotify crashed for the second time, his students asked him to pull up YouTube, which he did with reluctance.

“I mean yes . . . but that means you’ll see my YouTube history,” Sternfeld-Dunn said. The history included Potter Puppet Pals, among other searches.

Later in the class, after a student correctly gave the meter of one of the musical selections, Sternfeld-Dunn bumped the student’s fist — and it didn’t appear forced.

“He just adds so much life to the classroom,” vocal performance freshman Hector Garcia said after class. “The things he does, he just does them with such clarity and preciseness. He adds another level of enjoyment to the class.”

Music is something Sternfeld-Dunn enjoys on another level, he said, because of its uniqueness compared to other disciplines.

“This is a place where people from all sorts of walks of life come together with no agenda other than trying to make something great together,” Sternfeld-Dunn said. “You’re all working toward making something really great, and understanding that you need each other. You can’t ostracize anyone, because you need everyone.

“Sports can be like that, but the difference for me is that sports, at the end of the day, are about creating a team to work together to win something.