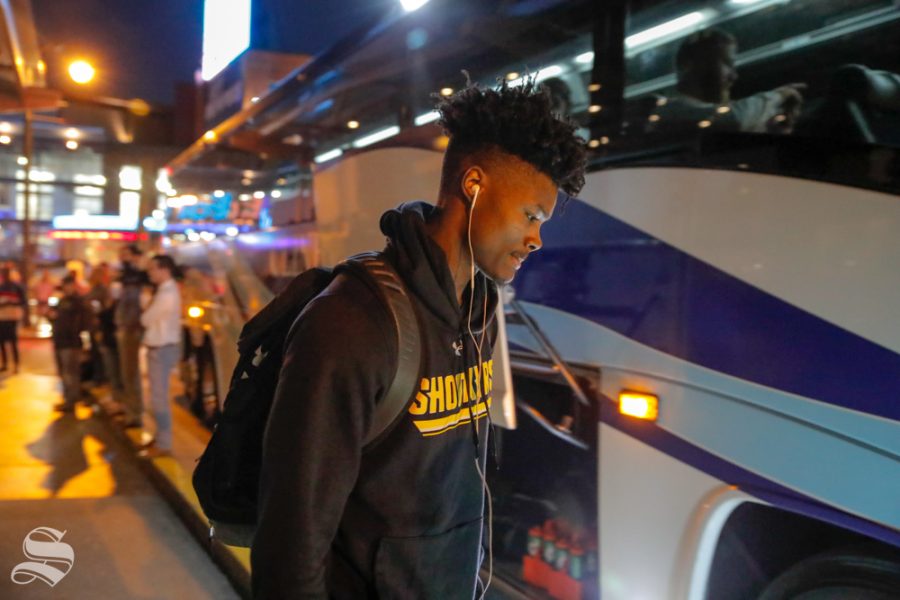 Rod Brown loads up on the bus on the way to the game on March 14, 2019. (Photo by Joseph Barringhaus/The Sunflower.)

The redshirt freshman forward will not return to Wichita State next season, he announced via Twitter Thursday evening.

Marshall said earlier this week that Gordon will commend playing time at the power-forward position.

“We’re going to need him (Gordon) to be a four next year …  We’ll play Teddy (Allen) at the four, Dexter (Dennis) at the four some. And we’ve got Rod Brown, too,” Marshall said, almost hinting at Brown’s pending departure.

Brown scored 41 points and had 48 rebounds in 36 games this season. He played reserve minutes behind Wichita State senior Markis McDuffie. Brown, a freshman from Cordova, Tennessee, reclassified to join the Shockers a year early. He ended up taking a redshirt season his first year, and never locked down sufficient playing time in the team’s stacked rotation.

His career is accentuated by a career-best nine rebounds against East Carolina late in the Shockers’ season. His 6-point scoring best came against conference-leader Houston.

Wichita State is hosting Grant Sherfield, a four-star recruit who was granted release from his letter of intent from UCLA, on an official visit Friday. According to reports, Wichita State is still in play for the highly sought after recruit who played this season at Sunrise Christian Academy.