Meet Max, the campus stray with a loyal fanbase 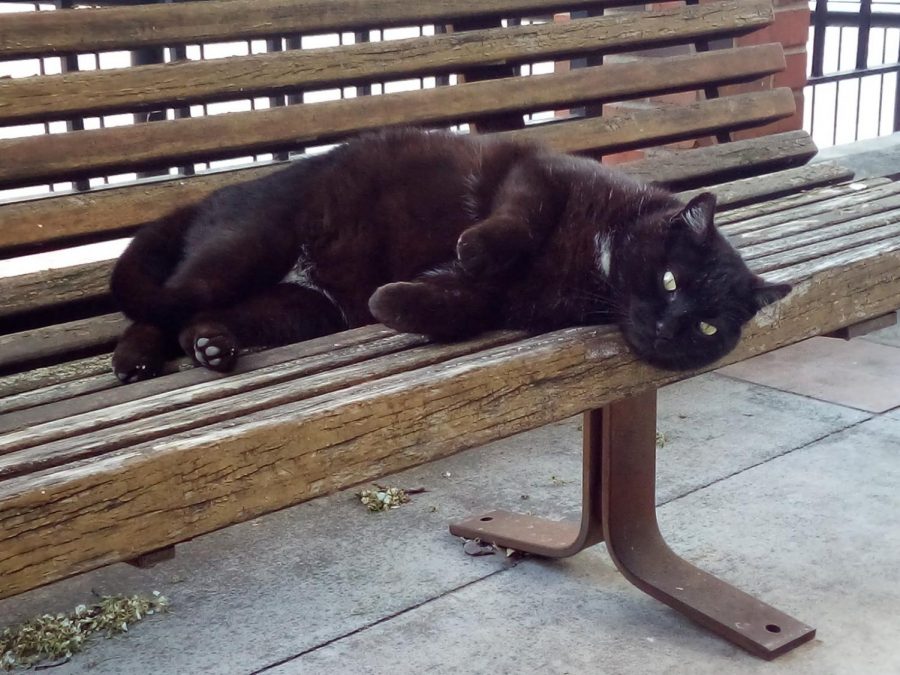 This is Max. He has lived on campus for over five years. Here he lounges on a bench near the CAC Theater.

Max has lived on campus for more than five years and is nowhere near getting his degree.

Max doesn’t dine at Chick-fil-A or Panda Express. But he does get three square meals a day — sometimes dry, sometimes wet. Maybe a little too much, judging by his belly.

He doesn’t live in Shocker Hall or The Flats. His bed, a storm drain, isn’t all that comfortable.

The closest thing he has to peers are possums and stray cats.

Max is a stray too, but he’s not like the others on campus. He’s friendly. And he’s popular.

Students, professors, staff members — they all greet Max by name when they see him.

“Hello, Max, how are you doing, huh?” a staff member leaving McKinley Hall greeted the cat Wednesday afternoon as he lounged on the sidewalk nearby, soaking up the sunshine.

Max, a scruffy black cat with white patches on his belly, is an in-the-open secret. He lives in the stretch of campus near Morrison Hall, Jardine, McKinley, the CAC Theater, and more.

“He’s our pet here on campus,” a female staff member who works in Jardine Hall said.

He’s not quite Gregg Marshall, but Max has “got a fan club,” a Facility Services worker said. “They come looking for him.”

That fan club does more than just pet, play with, and feed Max. A month ago, Max emerged from his storm drain limping, his paw hurt from a fight with some unknown foe.

So a female staff member took him to the vet. She paid for his care out of pocket.

Max has shots. He’s been treated for fleas. And he should probably be on a diet, the vet said at the time.

Max even gets attention on the weekends. An older couple comes to campus and feeds him every Saturday and Sunday.

He has an alarm clock in his stomach, the Facility Services worker said.

“He comes around 5 or 5:15 [every day]. If you don’t see him by then, something’s going on, because he’s usually bouncing out of that drain and over here to eat.”

Sometimes Max disappears for days at a time. Each time, Max’s friends figure he finally ran away or lost his ninth life. But Max always comes back eventually.

Nobody knows where Max came from, or why he’s so friendly. They just know that Wichita State is his home, and hope he doesn’t plan on leaving anytime soon. These are his stomping grounds.

Maybe he’s eligible for some kind of honorary degree.