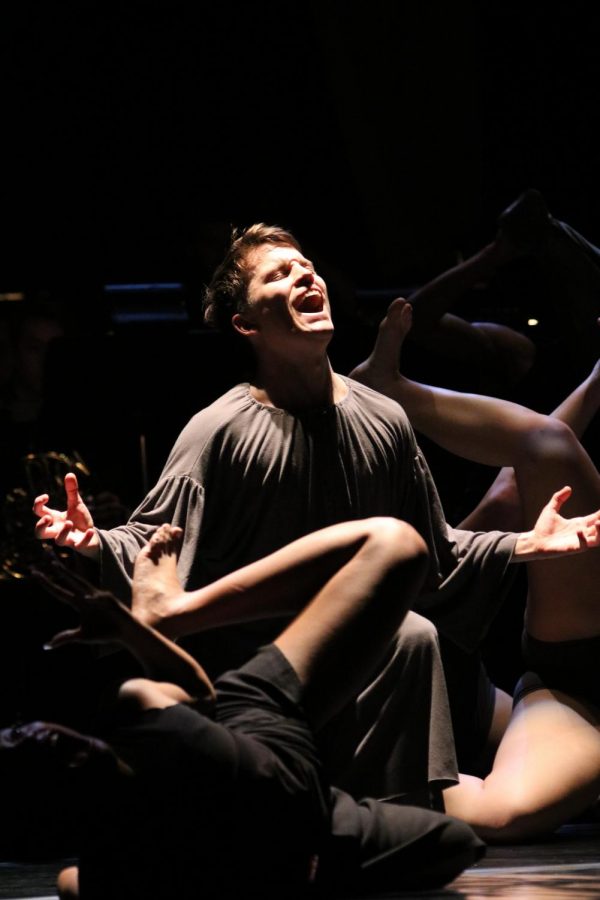 “Dante’s Nightmares and Dreams” ​is a stunning collaboration between the Wichita State Wind Ensemble and the Wichita Contemporary Dance Theatre. Featuring live music, film, and dance, Dante’s classic tale, “The Inferno​,” is brought to life in a veritable feast for the senses.

Director of Dance Nicholas Johnson initially took inspiration from a similar production called ​“Devil’s Lament​,” for which he acted as choreographer in 1994. When Director of Bands Timothy Shade reached out to Johnson for assistance in designing something more “visual” for the wind ensemble, Johnson decided to collaborate with him on an original production.

This performance is nothing if not visually striking. ​“Dante’s Nightmares and Dreams​” is a multitiered smorgasbord for the eyes, featuring a wind ensemble centered against a backdrop of film and foregrounded by a troupe of dancers.

In a series of three acts, ​“Dante’s Nightmares and Dreams”​ seeks to poetically represent the themes of the classic book, ​“The Inferno.”​ The tale of Dante can be simplified as a man tortured by dreams of humanity’s malice toward its own people. It serves as a warning to not repeat our past mistakes and as a plea to instead follow our own muse into the light.

Interestingly, the entire show is rooted in Dante’s fevered mind. This dreamlike state is evoked beautifully by the dance ensemble. Their performances manages to heighten one’s interpretation of the wind ensemble through frenetic, sometimes terrifying, movements.

The first movement, “The World Alive,” features only the wind ensemble and a movie, which plays black and white images of old-fashioned cameras. This segment opens simply, with a euphonium solo (a euphonium is a tenor-voiced brass instrument whose name is Greek for “sweet-voiced.”).

Gradually, the symphony fills in, creating a haunting melody. As the song progresses, so does the film — eventually revealing a figure of a man we follow down to a river, where he begins to develop a photo. The music slowly crescendos with painfully high flutes, until, sonically, we intuitively know something is wrong. The stage for Dante’s nightmares has been set.

The second act, ​“Thenato- The Descent to Hell​,” showcases a song titled “From a Dark Millenium.” A young Dante (Cainan Spellman-Sak) lies asleep in bed, while dancers writhe at his feet. The dancers are dressed in dark, hooded costumes. They slither like maggots or demented animals. The figures represent “figments of his dreams, or even figments of his imagination,” according to Johnson.

The effect is certainly otherworldly, as the dancers often move in synchronicity to suggest a single organism. Although the music and dance create a synergistic effect, the film portion of this movement feels, at times, cliched. As Dante loses his mind, the video depicts someone with a mental illness. To represent hell, flames are shown.

However, the performance reaches a zenith in the third movement, ​“Eros — The Ascent to Grace​” (with the ensemble playing “Grand Pianola Music Part 1”). Dante overcomes the darkness in his mind to ascend to a beautiful place with the assistance of a blonde-haired muse, played by Kenzie Gannaway.

As she leads him by the hand, an encore of dancers float by in flowy, gorgeous white costumes. Dante’s muse, if we refer to “​The Inferno​,” is leading him towards clarity and light. He has finally moved from desperation into a mindset where human spirit is defined by its creativity and innovation.

The dancers embody goodness and purity, and the stage lighting grants them a surreal glow. In the final scene, Dante is gently put back to sleep. In his hand has appeared an apple. In a postmodern twist, the band’s conductor stands at the foot of Dante’s bed, gazing down at him. Finally, he takes the apple from Dante’s hand and gives it a bite. The crowd laughs appreciatively at this final sardonic touch.

Ultimately, WSU’s adaptation is a striking, original production that pushes the bounds of creativity and risks sentimentality in order to bring Dante’s “​Inferno” ​to life.

“Hopefully, what you will experience is thought-provoking and even transformative,” Johnson said.

Walking out of the dress rehearsal on Thursday night into a tempestuous Kansas spring, my mind raced with music, dance, and imagery. “Dante’s Nightmares and Dreams” is transformative, yes. More so, it’s a reminder of the heights to which the human spirit can soar.

Check out photos from the production HERE.