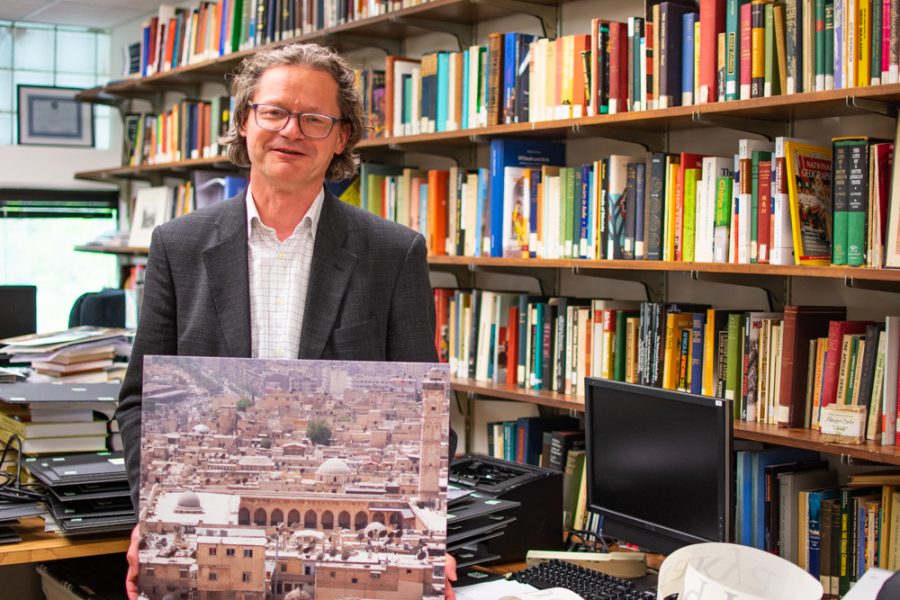 Dr. Jens Kreinath shows one of his photos from a day trip to Aleppo in Syria on May 29, 2010. The photos will soon be on display in Neff Hall.

Jens Kreinath spent a day in Aleppo in 2010. On that trip, he didn’t see blood, families torn apart, or crumbled buildings. He saw peace.

Kreinath, an anthropology associate professor, visited Aleppo a year before Syria’s civil war broke out, and two years before the civil war overtook Aleppo. An upcoming photo exhibition by Kreinath and war photojournalist Narciso Contreras will contrast the change in Aleppo from spring 2010 to fall 2012.

Kreinath shared his day trip to Aleppo with his then-five-year-old daughter. They visited the Citadel and other landmarks of the city.

“I have to realize some of these sites do not exist anymore,” Kreinath said. “I never kind of realized at the time what would happen.”

Kreinath’s portion of the gallery is named “A Time of Peace,” while Contreras’s is “A Journey of Pain.”

Contreras was “at the front lines,” Kreinath said. His photos aim to put a human face on the conflict. “He is trying to capture the human suffering of these people,” Kreinath said. “I think the implication of all these wars is unimaginable. Cultural heritage is destroyed.

More than 30,000 people have died in Aleppo because of Syria’s war.

An additional exhibit, “Remembrance — From Antakya to Aleppo,” will include nine photos of “cheerful moments” from Kreinath’s two interactions with Boulos Yazigi, the Metropolitan Bishop of Aleppo. Yazigi and Bishop John Ibrahim of the Syriac Orthodox Church were abducted on their return trip from Antakya in April 2013. Their location is still unknown.

The photo exhibition — “Reimagining Aleppo through Peace and Pain: A City in Syria’s War” — begins Monday at 2 p.m. on the second floor of Neff Hall. Some images “might be quite disturbing,” but were “purposely chosen to disclose the poignant reality of the situation in Aleppo,” a press release for the exhibition said.