Muma: ‘Too soon’ for breakdown of cuts to fund business building 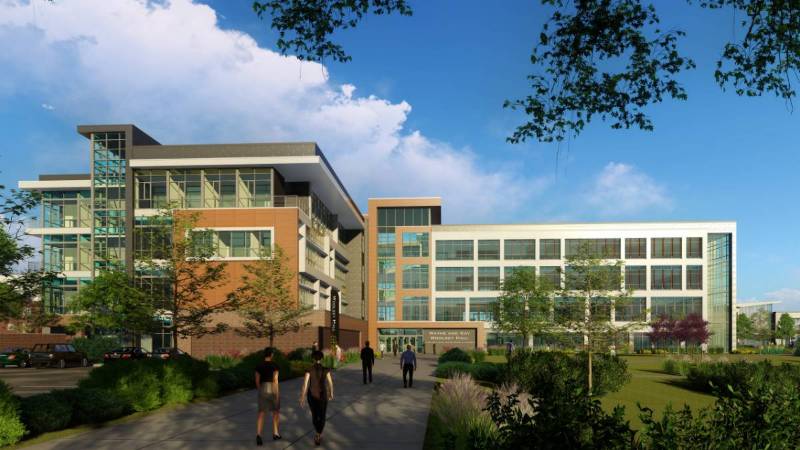 The Innovation Campus business building, Woolsey Hall, now has a $60 million price tag. Up from $50 million.

Provost Rick Muma said Friday morning that a plan to cut and reallocate funding from various divisions on campus to fund a new business building is “not finalized.” That means an itemized breakdowns of specific cuts in divisions cannot yet be given, Muma said.

The biggest area taking cuts to fund the building is Muma’s own division, the Division of Academic Affairs, which will reallocate $675,000.

The cuts and reallocations to fund the building are tentatively:

“My division, academic affairs, includes all the colleges and support units for enrollment,” Muma said in a five-minute interview before he left campus Friday. “Each one of those has a target amount which we’re working on to try to minimize loss across the whole campus.”

Muma said the target amounts aren’t yet finalized, so he was unable to provide specifics.

The combined reallocations and cuts will generate resources to make an annual bond payment of $1.5 million.

Muma said the reallocations are “all over the board” and are being made in a way to minimize “disruption” around campus.

“At some point, once we get it all settled and work with the offices, we’ll be able to provide a breakdown,” Muma said. “But it’s too soon right now. [We’re] still working with all the offices to say, ‘This is what we think you can contribute, now let’s have a conversation.’

“We respect the vote. The students spoke. We made it really clear — here’s our options, and it’s going to happen, so this is how we’re going to move forward.”