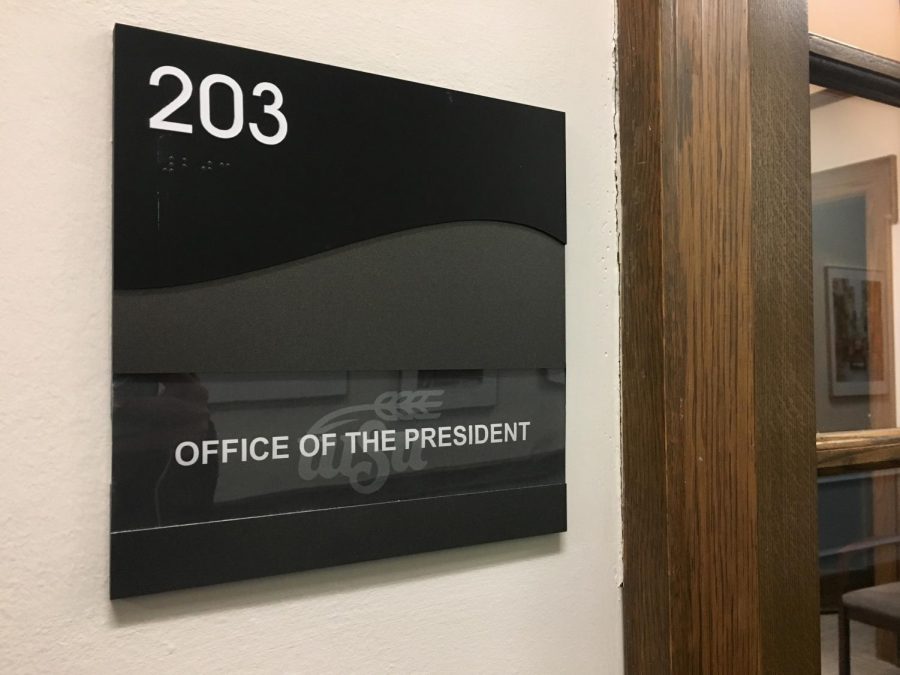 Wichita State's Office of the President is in Morrison 203.

The search for the next Wichita State University president will be closed to the public, a Kansas Board of Regents spokesman confirmed to The Sunflower Monday. That means none of the candidates considered or non-winning finalists selected by the Regents’ presidential search committee will be announced publicly.

Wichita State’s next president could set foot on campus for the first time after being selected for the job. By contrast, dean and provost finalists visit campus for interviews and to interact with faculty and students.

Presidential search committees in Kansas haven’t always been closed. Late WSU President John Bardo was one of five finalists for the job when he was selected in 2012, after visiting campus and speaking with university stakeholders.

The last open presidential search in Kansas was in 2015, when Emporia State chose Allison Garrett over another named finalist. Since then, the Regents have initiated two closed presidential searches for Kansas State and Fort Hays State, and a closed chancellor search for the University of Kansas.

In addition to appointing a search committee chair and members, the Regents will hire an outside search firm to aid in the closed process of identifying potential candidates.

Frank LoMonte is director of the Brechner Center for Freedom of Information, a non-profit, non-partisan First Amendment think tank based at the University of Florida. LoMonte told The Sunflower that closed presidential searches deny the public the chance to thoroughly vet finalists, and that research indicates they benefit “insider candidates” without yielding better-qualified or more successful presidents.

“More and more states are starting to move towards closed and secret searches,” LoMonte said Monday. “That seems to be primarily as a result of pressure from private headhunting (search) firms who insist that they need that secrecy to find the best-qualified candidates.”

Regents Director of Communications Matt Keith said the board has chosen closed searches over open ones in recent years, “in order to have a broad pool of candidates.”

“Sitting presidents at other universities can be dissuaded from applying for an opening if their names will be disclosed during the process,” Keith wrote in an email.

LoMonte said that doesn’t bear out in practice.

“There’s this myth that somehow there’s a field of superstar presidents out there who are dying to take other jobs if they can just be protected by confidentiality,” LoMonte said.

The Brechner Center recently ran a comparison to see if there was “a discernible difference in the caliber of people that get hired” through open and closed presidential searches, LoMonte said. The study compared searches in Georgia — a closed state — with those in Florida and Tennessee, both open states.

“What you find is that Georgia is not any more likely to hire someone from a more prestigious or highly rated institution than Florida or Tennessee,” LoMonte said. “What does happen is that in Georgia, the majority of people who get presidencies are people who have been promoted from within the university system.”

He said the data indicates that candidates with insider benefits tend to be the “primary beneficiary” of closed searches.

LoMonte said the public vetting process of candidates is a crucial piece of the equation that the secrecy of a closed search sacrifices.

“When you do the search without consulting the people at the candidate’s current workplace, you’re depriving yourself of the single most valuable source of information,” LoMonte said. “The best people to tell you whether this person is or is not suitable to be president of a university are the people they work with right now. Those are the people who don’t get to weigh in because of the secrecy.”

The University of South Carolina faced public backlash when its open presidential search yielded an all-male, all-white cast of finalists. A search committee chose those finalists from a group of 11 men. In response, students and faculty signed an open letter decrying the selection process, which prompted the board of trustees to temporarily put the search on hold.

Keith said many university stakeholders will be included on the search committee that recommends finalists to the Regents.

“Getting input from the community and constituents on campus is very important to the Board, which is why the Regents chose to have a committee lead the search,” Keith wrote. “While the committee members have not been named yet, typically they include classified and unclassified staff, students, faculty, administration, alumni, community members, and a Regent.”

There were 20 people on WSU’s 2012 presidential search committee, including two students.

With regard to appointing university presidents and chancellors, the Regents’ policy manual states that, “In determining the process to be utilized, the Board shall consider:  (1) which strategy will likely lead to the most qualified candidates seeking nomination to and remaining in the pool; (2) the interests and benefits of including more campus constituencies in the process; (3) the timing of the process; and (4) other factors that impact the process.”

“The Regents voted for a committee-led closed search as the best option to meet those criteria for this search,” Keith wrote.

LoMonte said the public is more willing to trust search processes that disclose finalists and bring them to campus to interact in-person with the people they would represent as president.

“When you get down to that last three or four people, it’s mind-boggling that you could make a hire of that consequence without bringing the person to the campus to see them interacting with members of the community,” LoMonte said.

At Monday’s General Faculty meeting, WSU Interim President Andy Tompkins said he expects the Regents to name a committee chair and search firm within the next week.

Tompkins said the Regents will approve the profile of an ideal candidate, which will be developed by the search firm. The consultant will work for about two months recruiting candidates before eight to 12 candidates are screened by the search committee, he said.

“The board will receive an unranked list of candidates from three to five people, and the board will select someone,” Tompkins said.

He said the next president will likely be named by late October or early November, but that their current employment status may keep them from starting right away.

“I might have the privilege of being with you until the end of December — maybe until next July,” Tompkins said.