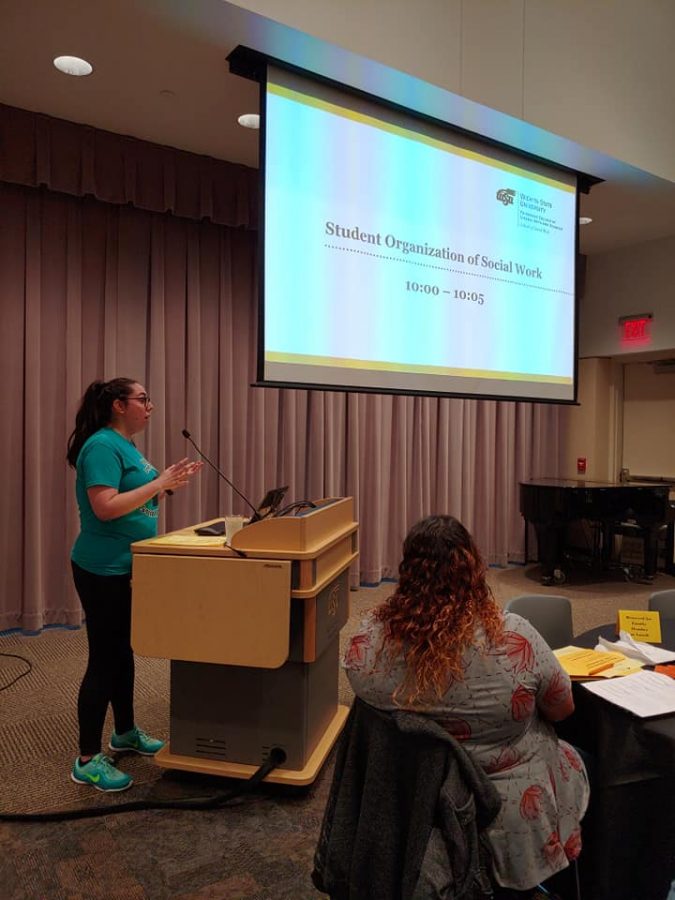 Sandra Sanchez speaks about the Dream Run that was hosted last month on Innovation Campus.

Throughout her time at Wichita State, Sandra Sanchez has been heavily involved in the community and on campus. Sanchez is a returning adult learner who is majoring in social work. She will graduate this month with her bachelor’s in social work.

Sanchez is a recipient of the Osher Reentry Scholarship — awarded to adult learners — which has funded the majority of her tuition.

Sanchez has always felt a deep passion for helping others, and working alongside social workers empowered her to pursue the career field, she said.

“Working with the social workers changed my life,” Sanchez said. “A social worker is actually the one who told me that I have a certain type of personality and character that really is a key tribute to be a social worker.”

Sanchez said the instructors and small class sizes are what she enjoyed most about WSU’s program. She was able to bond with her classmates on a deeper level due to the relatively low number of students in the program.

“Our core classes are really small and focused,” Sanchez said. “I feel like you are able to get a strong grasp of what social work is. The social work family is my other family. I consider them like my brothers and sisters.”

Sanchez said compassionate social workers struggle with the fact that they don’t have unlimited funding and resources to help everyone.

“Sometimes, we aren’t able to take away some of the roadblocks in their life in order to achieve their own personal goals,” Sanchez said.

She said that’s a difficult reality people in her field have to come to terms with.

Outside of her major, Sanchez was the creator and co-chair of the Dream Run event, which was hosted on campus last month. All proceeds from the run went towards scholarships for undocumented students.

“People say it’s one of the biggest events the campus has had,” Sanchez said.

The event proved successful, as it was well-advertised by multiple news outlets in the city and more participants than expected turned out to run.

Sanchez will be a first-generation college graduate.

Post-graduation, she plans to take a year off of school before returning for her master’s degree in social work. She will return as an alumna to assist with the second Dream Run, which will be hosted next spring.

Sanchez said her family is what drives her to be successful.

“I am doing this for my family. I have a 14-year-old brother. I want him to know the value of an education.”

“Your dreams don’t stop,” Sanchez said. “I chased this dream. I got it — now let’s see where we can go from now.”