After wakeup call, Aaron Austin resolved to show students he had their backs 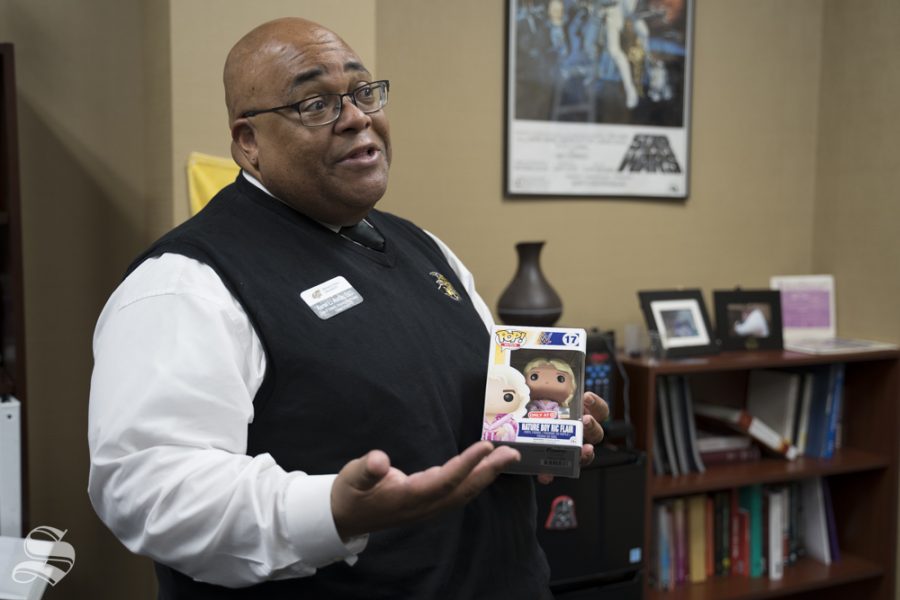 Aaron Austin grew up without a father, ate free and reduced lunches, lived in government-subsidized housing, was in the Head Start program, and always needed loans to pay for school. But all that was easy compared to what he faced as a 40-year-old at Bethel College, he said.

He’s a black man working in higher education administration — the only black man in WSU’s current administration. He knows some people assume he only has his job because he’s black. He carries that everywhere he goes, he said.

And there are two more things he carries everywhere: the numbers two and eight. They’re also posted above his office door in the Rhatigan Student Center. They serve as reminders of that time he struggled at Bethel College in 2016.

Days before convocation, Austin had met with a group of black students to listen to their concerns as students of color.

He was happy to see many of those same students, as a group called Bethel Lives Matter, take over the podium at convocation to read off a list of demands.

Austin was on the edge of his seat.

Austin was seconds away from getting up and joining the students on stage.

Then they reached demand eight, and he was thankful he never left his seat.

“We demand an apology from Aaron Austin for selling out to the ‘white man,’ or a resignation,” the students announced.

Austin was crushed, but listened as the students continued the demands. He left convocation broken, not understanding where he’d failed.

But there was more. A separate, smaller group soon after came out with a second, similar list of demands. Demand number two: Aaron Austin needs to apologize or resign.

“I never felt as if I had failed so completely [until then],” Austin said in his office in the Rhatigan Student Center last week. “I felt that I had always done everything I could for all students, because that’s my job — to take care of all students. I always thought I was an ally, specifically to students of color.”

He contemplated quitting. He was embarrassed. He didn’t know what to do. But he picked himself up — and took the demands as a challenge.

“I said okay, I need to be more present in [students of color’s] lives so that they know I’m there and support them,” Austin said. “So I don’t have any ill will toward the students who said that. They spoke what they believe. It’s not enough for them to just see my face and think I’m supporting them just because of the way I look.

“So if you look at my door, that’s what that’s for. It’s not enough for me just to be Aaron, the black guy in this position. Aaron has to show students that I have their back.”

‘Prince is the greatest musician of your lifetime’

There’s much more to Austin’s office than those two reminders. Austin is — he said it himself — a nerd. There are “Star Wars” and “Black Panther” posters. He’s got a Ric Flair Funko Pop. A Prince “Purple Rain” poster dominates part of the room.

“I really like [Jay Z’s] ‘The Black Album,’” Austin said. “I know most people would probably pick ‘Reasonable Doubt.’ And I really enjoyed the last one, ‘4:44.”’

He’s not a fan of some newer hip hop artists, though.

“Some of it is ridiculous to me,” Austin said. “Who’s that fool, Lil Pump? It’s like c’mon, really, how’d you get a deal? No offense if he’s your guy.”

Austin’s office is the place where he unwinds and recharges. Whether working student involvement events, handling conduct cases, or completing any of his other various duties, Austin often has to be a public speaker. While he comes across as a natural in front of crowds — which may stem from his early college years singing opera — he’s “as introverted as you can probably get,” he said.

Those early college years were at K-State, where he switched from vocal performance to music education after he realized, “I’m not that good.” He got his master’s in higher education at Arizona State.

‘She was my anchor’

Austin never had a thought of not going to college growing up, he said. That was all because of his mom.

“It’s weird, because my mom didn’t go to college,” he said. “My mom got a GED — she didn’t even really finish high school. But I don’t even ever really remember it being a question.”

Any time a problem came up, Austin’s mom was there to fix it, he said. She made it easy for him not to struggle. Looking back, he said he doesn’t know how she made it seem so effortless.

When Austin was about to graduate high school, he was called into the counselor’s office and told he was a half-credit short in social sciences, so he couldn’t graduate.

“I was devastated,” Austin said. “So I call my mom, and she says, ‘Don’t worry, I’m going to figure it out.’ So I hang up the phone. And then, moments later, here comes the principal saying, ‘I just got off the phone with your mother, and we’re going to find you an independent study so you can graduate.’

“She was my anchor. She kind of kept me steady.”

Austin’s mom passed away in June.

Now Austin has his own ships to anchor: his family — and student affairs.

“What’s been exciting about this job is to come in at almost the same time as Dr. [Teri] Hall,” Austin said. “She’s really the captain of the ship. She says, ‘This is where we need to go, and this is where we’re going.’”

Austin works with student conduct, housing, student involvement, and a variety of other areas. He often has to be the bad guy. But he’s able to keep each area grounded and effortlessly under control, Hall said.

“He’s the whole package,” she said. “He’s got a strong commitment to his personal life, his work life — he just brings this whole part of who he is to everything he does, and I appreciate and value that.”