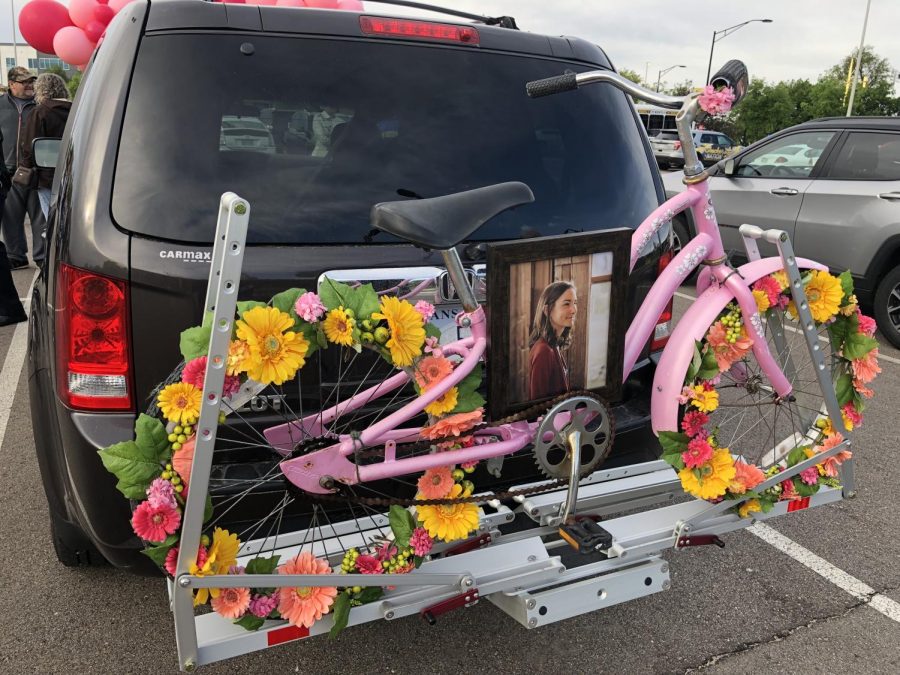 A decorated bike with a photo of Bridget Harrison is mounted to the back of a support vehicle that is following the cyclists to Canada. A gifted surgeon who suffered from anorexia, Bridget died last May at age 34.

Long-distance cycling involves pushing through a certain amount of physical pain, but it was a different kind of pain that got retired Wichita surgeon Paul Harrison on the bike — the loss of his 34-year-old daughter, Bridget.

Harrison watched anorexia wreak havoc on his daughter’s life. A gifted hand surgeon with a quirky sense of humor and a proclivity for helping others, Bridget succumbed to the ensuing depression and anxiety last May.

“She could help others, but she couldn’t help herself,” Harrison said.

Riding alongside his younger brother Kelly and childhood friend Richard Stephens, Harrison embarked for Canada Friday morning on a grueling, nearly 1,000-mile trip from Wichita to Winnipeg, Manitoba. Along the way, the trio of Wichita State alumni hope to raise $100,000 for the National Eating Disorders Association to advance research and treatment options for the disease that ended Bridget’s life.

It was dedication and persistence that drove Bridget to earn top honors in her medical class and become a widely published researcher and professor at the Baylor College of Medicine.

“Her personality was that she would do everything right — everything to her best ability, and she had a strong will,” said Carolyn Harrison, Bridget’s mother.

These perfectionist tendencies caused Bridget to punish her body physically. It started when she was 12.

“She and a friend decided they were going to go on a diet,” Paul said. “Of course, Bridget had to do everything to the nth degree, and that was the trigger that eventually ended her life.”

People who are biologically susceptible to eating disorders have different sensitivities to such triggers as body shaming and unrealistic beauty standards perpetuated in pop culture and advertising.

Paul said many people don’t understand the devastating psychological effects of an eating disorder — “it’s not just the food.”

“Depression and anxiety are a big part of anyone’s life with an eating disorder. That started to sort of rob her of her social interactions.”

Bridget didn’t want people to talk about her anorexia. Her parents kept it amongst their friends and family for a long time.

“There’s that suffering that they don’t want to share with anyone else,” Carolyn said. “It’s amazing just with Paul’s ride — it’s opened up a lot of conversations with people that we didn’t know they had family with eating disorders.”

Throughout her life, Bridget’s parents respected her right to privacy, but they now hope to raise awareness for eating disorders through their daughter’s memorial ride.

“We’ve discussed that Bridget would be pretty pissed at us for making this so public,” Paul said of the memorial. “But she also wouldn’t want anyone to go through what she went through.”

Bridget’s pain was a constant, even as she excelled in her professional life.

“She was physically and emotionally in pain and talked about wanting to die for at least seven years,” Paul said. “I’d say, ‘You don’t know what kind of pain that would cause your family.’ She says, ‘You don’t know how much pain I’m in’ — and people don’t.”

As of Sunday, Bridget’s WREATH (Wichita to Winnipeg Ride for Eating Disorder Awareness) had already raised more than $28,000.

Paul said donations have come from all over the United States.

“The response is just reflective of how bright a light [Bridget] was to a lot of other people,” he said.

“I don’t know if she didn’t realize, but she couldn’t accept that she was important to anyone. That’s part of the disease as well is lack of self worth in people that are exceptional in every way.”

Paul Harrison and Richard Stephens cycled to Winnipeg in 2016 to raise money for the Alzheimer’s Association after Harrison’s father, Herb, was diagnosed. It was Stephens who suggested riding again to memorialize Bridget.

“I’d been pretty much just grieving about her loss, and it gave me something else to do,” Paul said.

“A lot of us that exercise — it’s a way of releasing or getting away from some of our mental demons.”

A starting guard on the 1970 Wichita State football team, Stephens has had his fair share of mental demons to exorcise. He was one of just nine survivors when the “Gold” team plane went down in the mountains near Silver Plume, Colorado on that fateful October day.

Stephens was thrown from the plane as it exploded on contact with the side of the mountain. His right leg was shattered. His hip was dislocated. His sternum was cracked.

He was one of the lucky ones.

“The one thing that drives me to a large extent is the fact that so many good people died that day — and I was spared,” Stevens said.

His persisting injuries plagued him — limiting his physical activity. Undeterred, Stephens took up cycling because it meant he rarely had to put more than 40-50 pounds of pressure on his leg.

Twice, Stephens has made the 550-mile trip to the site of the plane crash on bike. His first of three 10-day rides to Winnipeg came after a close friend’s wife was diagnosed with breast cancer.

Now in his early 70s, Stephens rides for a cause — honoring the friends he’s made over the years and raising money for the diseases that afflict them.

He and Paul Harrison have known each other since elementary school.

“We’ve been friends for at least 55 years,” Stephens said.

Helmets on and poised to set off for Winnipeg from outside WSU’s Woodman Alumni Center Friday morning, Stephens began to feel light-headed. When the feeling didn’t pass, his family took him to the Wesley Medical Center emergency room to get checked out.

After a few tense minutes, Paul and Kelly Harrison departed north without their third rider. But Stephens wasn’t going to be left behind.

After his ER tests checked out fine, Stephens caught a ride north to join his fellow cyclists, his daughter said.

“I tried to get him to stay home tonight and go tomorrow, but he does what he wants!” Sarah Stephens Selmon wrote in an email Friday afternoon.

Paul Harrison understands the internal drive to keep pushing. As he set off to memorialize his daughter, he acknowledged the cathartic nature of the trip.

“The physical exertion kind of helps mitigate the emotional pain.”

Now, there’s nothing before him but open road.