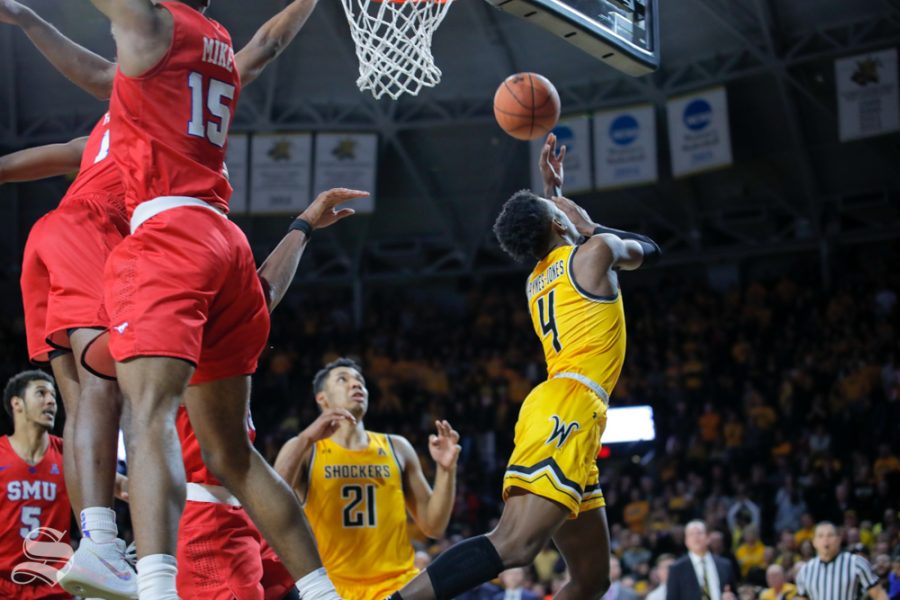 With the 2019 school year officially ending on Thursday, The Sunflower sports staff put together a list of the top-10 sporting moments of the past year.

Wichita State freshman Josh Cable has defied the odds. On May 3, a year after being caught in a house fire that burned him severely, Cable ran the 800-meter in 1:57.28, finishing fourth out of nine runners. Earlier, on December 8, 2018, Cable ran a 600-meter race during the indoor season. His time wasn’t great, but it was a emotional victory for himself, and his team. – Marshall Sunner

In the waning seconds of the game, UConn’s Alterique Gilbert hit back-to-back threes to tie the game up at 83. Samajae Haynes-Jones proceeded to go the length of the court and hit the game-winner while falling away from the basket. Haynes-Jones had hit his second game-winner of the season and kept alive WSU’s hope for a top-6 finish in the AAC. The shot gets better each time you look at it as Haynes-Jones was falling away from the basket and the shot somehow went in. – Sean Marty

Arguably the most clutch player this season, senior Samajae Haynes-Jones beat the buzzer on January 30, 2019 to get Wichita State the win against SMU. Haynes-Jones isolated himself at the top of the arc, drove into the lane, and hit an acrobatic reverse layup with less than a second remaining on the clock. He made the layup after splitting two defenders mid-air. The Shockers won 85-83. – Marshall Sunner

This past season, both Shocker women cross country and track teams won the American Conference Championships in just their second season in the conference. In cross country, WSU edged out Tulsa by two points giving them the title. Kirk Hunter’s staff was awarded women’s staff of the year for the first time since 2010 in which they won the Missouri Valley Conference title. Just two weekends ago, the women’s track team completed the sweep as the Shockers won the conference title. After an off year in 2018, the Shockers got back to their winning ways and won their fifth conference title in the last six years. Steve Rainbolt’s staff was awarded the American’s Women’s Outdoor Coaching Staff of the Year Award. – Sean Marty

Senior Laurie Derrico could not have finished off her senior season in a better fashion. Derrico blasted seven home runs in her senior season, to tie Cacy Williams with 38 career home runs as a Shocker. Despite softball’s season being cut short, Derrico has etched her name into the Shocker record books. – Sean Marty

Freshman Lauren Mills hit a walkoff home run against the conference’s No. 1 team USF on May 3, 2019 in the final regular season series of the year. It was her first home run since February 9, and her second of the year. The Shockers came away with the win in extra innings, 4-3. – Marshall Sunner

7. Baseball and Softball serve dual walk-offs on the same night

Both the Shocker baseball and softball teams walked off Kansas on the same night. Neleigh Herring knocked in Madison Perrigan, who came around to score, winning the game 11-10 in nine innings. Meanwhile, for baseball, Hunter Gibson hammered a walk-off home run to win the game 3-2 in the 13th inning. This series of events is very rare and even that both games ended around 30 minutes of each other. – Sean Marty

Italian star Giorgia Civita has already recorded over 1,000 digs in just over 200 sets played — surpassing the mark faster than anyone else in Wichita State history. Against Tulsa, Civita surpassed her career-high with 42 digs. That record marks third among five-set digs in WSU’s history. – Marshall Sunner

Winny Koskei’s historic start to her WSU track-and-field career continued as she became the first Shocker to win runner-of-the-year in the AAC. She also became the first Shocker to receive All-American honors by placing 35th at the NCAA Championships. Lastly, Koskei broke a 31-year-old record by Kathryn Evans in the 3000-meter dash. Koskie’s early success in her Shocker career especially since she is only a sophomore and looks to lead a historic running career. – Sean Marty

10. Landry Shamet has historic rookie season in the NBA

In the past year, former Wichita State guard Landry Shamet was drafted 26th overall in the NBA by the Philadelphia 76ers, traded to the Los Angeles Clippers, and set a multitude of NBA marks. In January, Shamet broke the 76ers franchise record for most threes by a rookie with eight makes, all while scoring a career-high 29 points. The day after being traded to the Clippers, Shamet’s 13 fourth quarter points helped his team erase a 28-point deficit and win the game against the Boston Celtics. In March, he broke the Clippers rookie mark for most threes in a game with seven makes, and in the playoffs, Shamet hit the biggest shot of his short career with a game-clinching three-pointer against the Golden State Warriors, that sealed a 31-point comeback, the largest in NBA postseason history. – Marshall Sunner