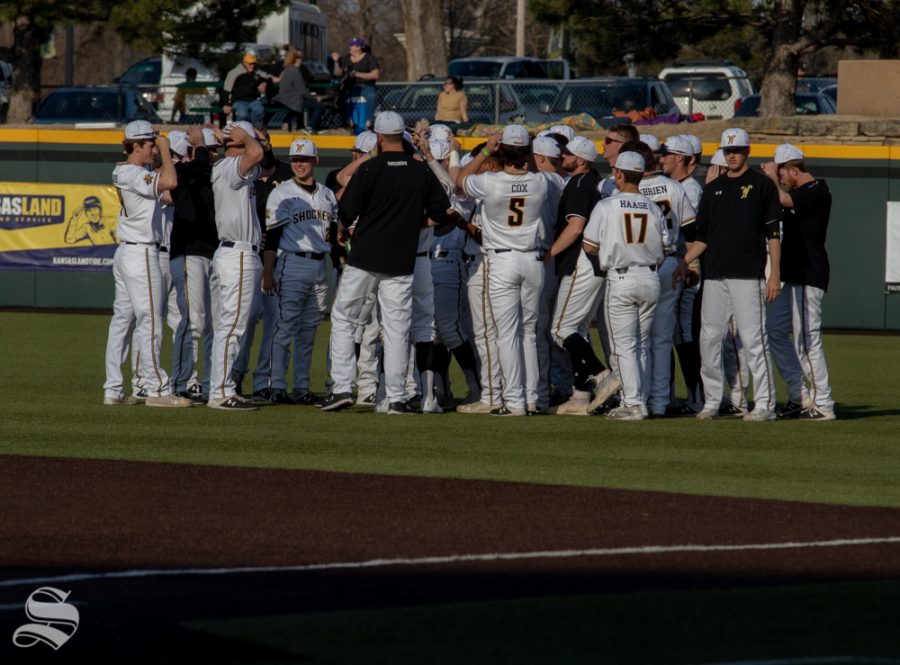 The Wichita State Baseball team prepares for their game against Kansas State on March 27 at Eck Stadium (Austin Shaw/The Sunflower.)

With their backs up against the wall and the possibility of missing postseason play, the Shockers survived and advanced.

Wichita State took two games out of three from South Florida, clinching the No. 8 seed in the conference tournament.

WSU nearly blew game one of the series as they held a 7-2 lead, but Mitchell Walters shut down the Bulls, and propelled the Shockers to a pivotal 7-6 win. The Shockers then dropped game two to USF as the bats never got clicking, losing by the score of 2-0.

In the pivotal game three, the Shockers offense exploded for four runs in the top of the ninth inning to give them a 7-3 lead. Mitchell Walters picked up his second save of the series while pitching a scoreless inning, helping clinch the team’s spot in the conference tournament.

In round one of the tournament, the Shockers will face the No. 1 seeded and nationally ranked East Carolina on May 21. This past weekend, the Shockers took one out of three against the Pirates after an incredible senior day pitching performance by Clayton McGinness.

As the regular season concludes, WSU finishes with an overall record of 26-29, and 9-15 in conference play.