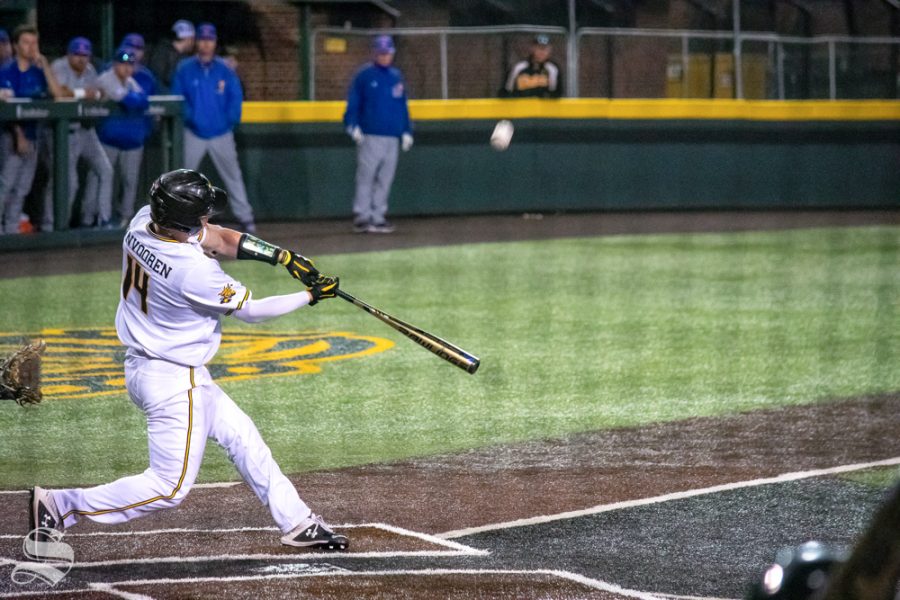 Wichita State's David Vanvooren hits a fly ball that is caught by one of Kansas University's outfielders during their game on Wednesday, March 20. (Photo by Easton Thompson/The Sunflower).

WSU was unable to complete a comeback late against UConn in the second round of the AAC Tournament. They lost  9-7.

After the Huskies struck first, to obtain a quick 1-0 lead in the top of the second, WSU quickly responded. With the bases loaded, freshman David VanVooren hit a two-run single to put the Shockers up 2-1. Senior Luke Ritter then just missed a three-run homer as he settled for a two-run double off the wall to increase the WSU lead to 4-1.

After pitching only three innings, junior Tommy Barnhouse had to exit the game in the fourth inning with back issues. Junior Preston Snavely struggled in relief of Barnhouse as he allowed the Huskies to retake the lead, 7-4.

Once again, the Shockers showed some resiliency as they fought back to tie the game at seven. In the fifth, freshman Jack Sigrist got one of the runs back on an RBI double to cut the deficit to two. The following frame, redshirt junior Mason O’Brien made it a one-run after reaching on a fielder’s choice, scoring redshirt junior Jordan Boyer. The Shockers finally broke even as VanVooren’s RBI double scored junior Jacob Katzfey in the bottom of the 7th, tying the game at seven.

UConn regained their lead in the top of the ninth, courtesy of a Pat Winkle RBI single to put the Huskies up 8-7. UConn then increased their lead after junior Paul Gozzo groundout and the Shockers were unable to muster anything in the bottom half of the inning.

Despite the loss, the Shockers are still alive in the AAC Tournament. They will have a rematch with East Carolina, who they defeated in the first round of the tournament. The game is scheduled for Friday at 2 p.m. CT and will be an elimination game. The Shockers record now stands at 27-30.