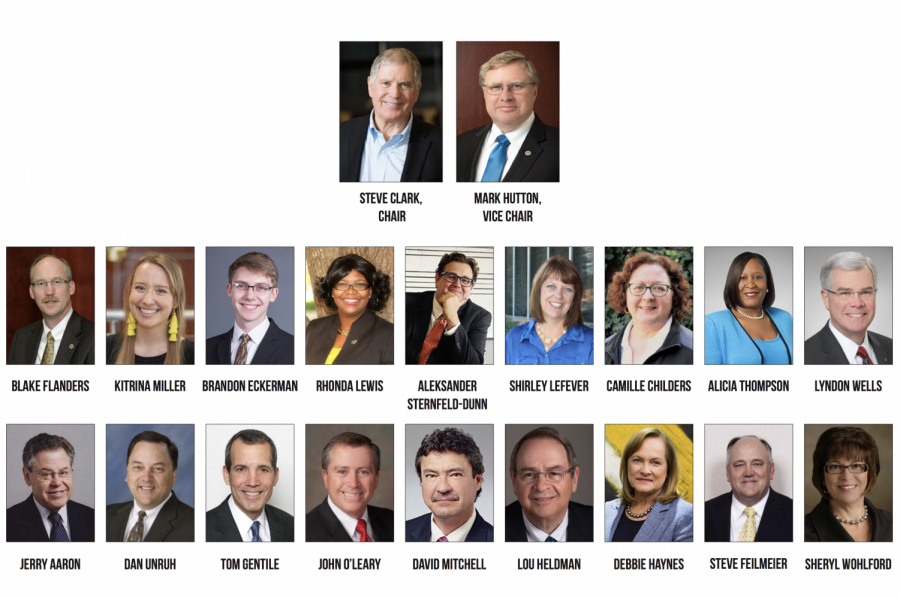 Steve Clark and Mark Hutton headed the 20-person committee that selected a pool of finalists for the next president of Wichita State. The Kansas Board of Regents selected Jay Golden, a vice chancellor at East Carolina University, from that pool.

Following the death of late Wichita State president John Bardo in March, the Kansas Board of Regents formed a search committee to select the next president.

The 20 committee members, which includes two student representatives, were appointed at the May 16 KBOR meeting.

The search process will be closed, meaning finalists for the position will not visit campus or be publicly announced.

The following are members of the presidential search committee:

Steve Clark is chairman of Clark Investment Group and was a Kansas regent from 1999 to 2002. Clark, the namesake of the Steve Clark YMCA and WSU Student Wellness Center, also chaired the university’s 2012 presidential search that identified John Bardo as one of five finalists for the position.

He earned his degree in business administration from Wichita State.

Mark Hutton was appointed as a member of KBOR in 2018 by former Gov. Jeff Colyer. He is the founder of Hutton Construction Corporation in Wichita and worked as the CEO until 2010.

Hutton served as the Republican representative for the 105th district in the Kansas House of Representatives from 2013 to 2017. He earned his degree in construction science and management from Kansas State University.

Blake Flanders is the president and chief executive officer for KBOR.

Flanders has earned bachelor’s and master’s degrees in animal science and a doctorate in curriculum and instruction from K-State.
Wichita State Community
Kitrina Miller

Kitrinia Miller is president of the 62nd session of Student Government Association at Wichita State. Miller previously served as student advocate in the 61st session.

A social work major, Miller plans to have a certification in social work and addiction, as well as a minor in women’s studies. After graduation in May 2020, she plans to seek a master’s degree in social work.

Brandon Eckerman is president of the WSU Student Ambassadors Society, which aids WSU Admissions in recruitment efforts across the region. A biomedical engineering major, Eckerman is seeking a minor in personal selling.

Rhonda Lewis is a professor and chair of the WSU Psychology Department. Lewis graduated from Wichita State with a bachelor’s degree in psychology in 1991. She has a doctorate in developmental and child psychology from the University of Kansas, as well as a master’s of public health from the KU School of Medicine.

A faculty member at WSU since 1997, Lewis chaired the Faculty Senate Executive Committee from 2009 to 2014.

Aleksander Sternfeld-Dunn is director of the WSU School of Music. In his eight years at Wichita State, he has served on the University Strategic Planning Committee, Faculty Senate and the President’s Advisory Council on Innovation.

Shirley Lefever has served as dean of the WSU College of Applied Studies, formerly known as the College of Education, since 2015. Her career at Wichita State began in 2005 as department chair for curriculum and instruction. She later served as the associate dean for the college.

She has a bachelor’s, master’s and doctorate in curriculum and instruction from K-State.

Camille Childers is director of Student Health Services at WSU. She is also the president of the Unclassified Professional Senate for the 2018-2019 year.

Outside of the university, Childers is a board member of the Medical Service Bureau — a local non-profit organization. She completed nursing school and earned a bachelor’s degree from the University of Phoenix.

Lou Heldman is vice president of Strategic Communications at Wichita State. He serves on the president’s Executive Team and The Board of Directors of the Wichita State Innovation Alliance.

Prior to joining Wichita State in 2007, he was publisher and president of the Wichita Eagle. Heldman is a graduate of Ohio State University and of the Program for Management Development at Harvard Business School.

Lyndon Wells retired from INTRUST Bank in 2016. With 40 years of experience in banking, Wells most recently served as director of public affairs at INTRUST Bank. He is currently the chair of WSU Tech’s advisory board and chair of Ascension Via Christi Health, Inc. Board of Trustees.

Wells has a bachelor’s degree in business administration from Hastings College.

Jerry Aaron is a 1964 graduate of Wichita State with a law degree from Washburn University. His legal work included 15 years as a corporate attorney and general counsel for Pizza Hut, Inc. He also served as president of the company’s franchisee association for five years.

Aaron retired in 2008 after a 17-year career as general counsel and senior vice president of Lone Star Steakhouse and Saloon, Inc. He served on the WSU Investment Committee and has been a member of the National Advisory Committee for over 15 years.

Dan Unruh is a partner with InSite Real Estate Group, a commercial real estate brokerage and development firm based in Wichita.

Unruh is a certified commercial investment member (CCIM) and has a bachelor’s degree in business administration from Wichita State.

He has served as an adjunct professor within the WSU Finance, Real Estate and Decision Sciences Department.

Tom Gentile was named president and CEO of Spirit AeroSystems in August 2016 after joining the company as the chief operating officer in April 2016.

Gentile earned his bachelor’s degree in economics and a master’s degree in business administration from Harvard University. He has also studied international relations at the London School of Economics.

David Mitchell has been managing partner of Mitchell & Richards, CPAs since 1982. He also taught for 10 years as an adjunct professor.

He is a board member of the Wichita State Innovation Alliance, a past Rotary president and currently serves as a trustee for the Wichita Sedgwick County Historical Museum and the Wichita Art Museum.

Debbie Haynes worked full-time for 33 years in family medicine in Wichita before retiring in 2015. Haynes is currently chair of the WSU Foundation Board of Directors.

Haynes earned the position of clinical professor at the KU School of Medicine, where she earned her medical doctorate. She also studied at Wichita State, where she was elected student body president.

Steve Feilmeier is an executive vice president and chief financial officer of Koch Industries, Inc., as well as a member of the Koch Industries Board of Directors.

Sheryl Wohlford is president and co-owner of Automation-Plus, Inc. Originally from Kansas, Wohlford graduate from Wichita State in 1982 with a bachelor’s degree in health administration.