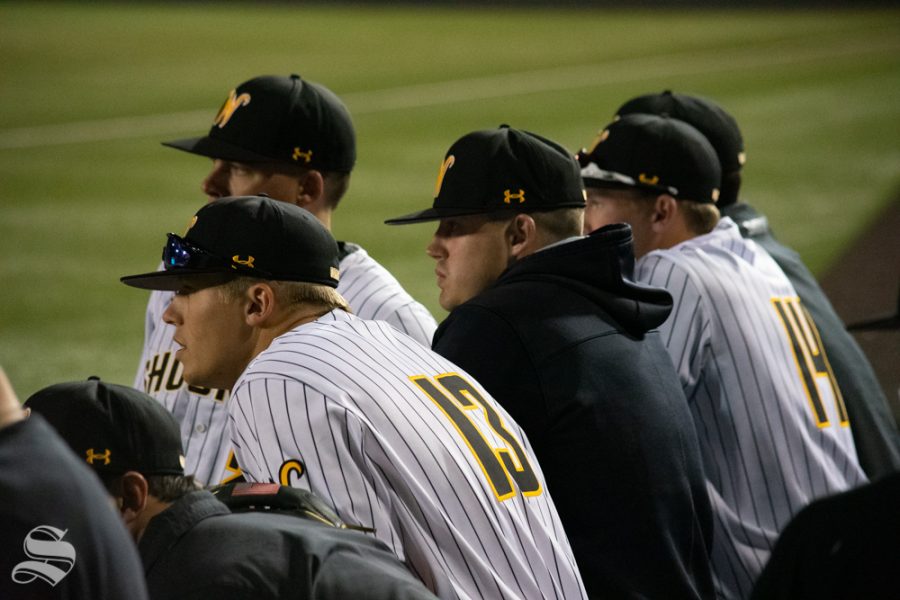 Wichita State players watch and wait for the decision to postpone the game in the seventh inning of their game against University of Central Florida on Friday, April 19. (Photos by Easton Thompson / The Sunflower).

WSU’s season has come to a close after losing to UConn 8-3 on Saturday in the American Athletic Conference tournament.

Once again, the Shocker offense got off to a hot start building a 2-0 lead in the first two innings. In the top of the first, Luke Ritter came around to score after a fielder’s choice giving the Shockers a 1-0 lead. They tallied another run in the top of the second, following a wild pitch that scored Jacob Katzfey.

The WSU offense struggled after UConn pulled its starter, and the bullpen delivered  a solid 7 ⅔ innings, only allowing two hits and one run in the process.

Right after the Shockers gained its 2-0 lead, the Huskies responded with a five-run second inning giving them a 5-2 lead. Todd Butler had to pull starter, Connery Peters, after only getting one out in the second inning. The Shockers had to use three different pitchers to get out of the second as Miller Pleimann was only able to get one out and Jacob Lindemann limited the damage to five runs for the inning.

UConn added to their lead in the fifth inning after a bases loaded fielder’s choice scored Chris Winkel. UConn led 6-2. The Huskies tallied another run in the seventh after a costly error from Jordan Boyer with two outs pushed the scored another Husky run.

The Shockers showed some fight in the top of the eighth inning. A sacrifice fly from pinch-hitter Noah Croft cut the deficit to four runs,  but the Huskies scored once again in the bottom half of the inning to reclaim their five-run lead, 8-3.

With the loss, the Shockers season has ended with their record being 28-31. Despite finishing one spot worse in the AAC than last season, WSU went the farthest it has in the AAC tournament in its brief presence in the league.