“This is a homecoming for me”: Wedge formally introduced as new head baseball coach 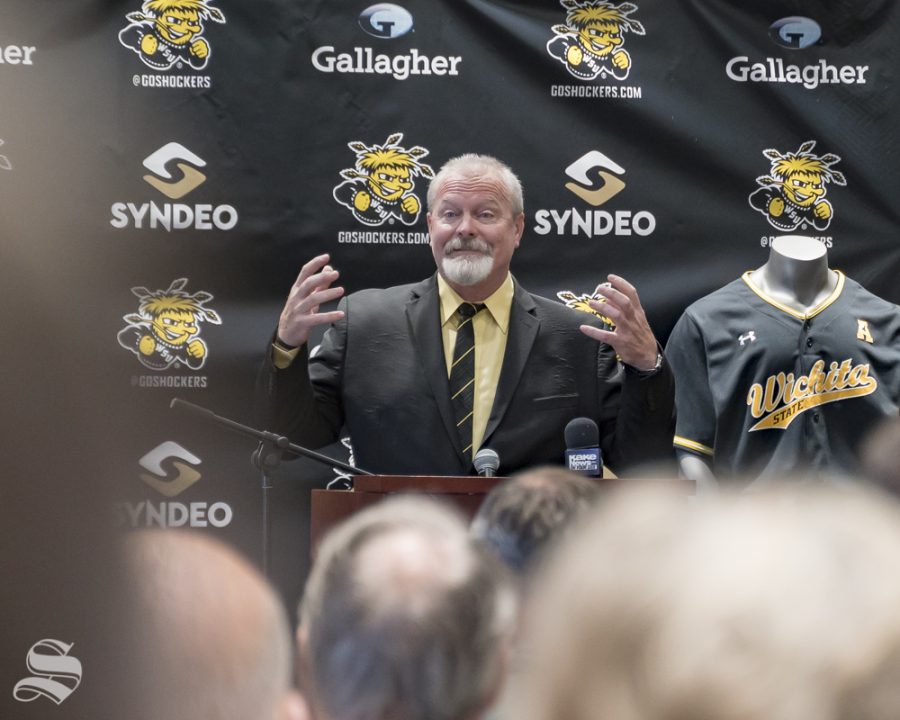 Wichita State's new baseball coach Eric Wedge pledged during his introductory speech to push the program back to its winning ways. The introductory press conference was held on June 4 at Marcus Welcome Center.

Former Wichita State catcher Eric Wedge has been formally introduced as the new head baseball coach. He is the third coach in WSU baseball’s modern era.

The former All-American, and National Champion, took the podium for his first public appearance as the face of the Shocker baseball program on Tuesday, discussing an array of topics. One thing he made sure to bring up is that he is excited to be back in Wichita.

“There’s no where I’d rather come back to coach than here,” Wedge said. “It’s more than the program, it’s the university.”

“This is a homecoming for me.”

The seed was planted for Wedge to come back to his alma mater when he was the manager for the Seattle Mariners from 2011-2013. Wedge had heard about the firing of his former head coach Gene Stephenson and thought to himself: “What’s going on?” When the search opened up for a new head coach, Wedge was informally offered the job. He politely turned it down to continue his MLB coaching journey.

“I said, ‘I’m busy right now, but I appreciate it,'” Wedge said jokingly during his introductory speech.

Wedge did credit that moment as him starting to think about coming back to the program someday.

After Todd Butler was fired from the program on May 26, Wedge’s name immediately sparked interest from the community, and the university. Three days later, on May 29, Wedge would sign a five-year contract to become the new head baseball coach. On Tuesday, Wedge noted that the program has been on a decline from past years, but he wants that to change.

“Sometimes there’s a blip on the screen–that’s what happened here,” Wedge said. “However, there’s energy in this city, and it’s humbling. We are going to keep pushing, keep plugging and knocking on that door.”

Wedge emphasized that a transition could take time.

“It’s going to be something to count on,” Wedge said about the future of the program. “But we have to develop a culture – I don’t know how long that is going to take.”

Wedge has 10 years of major league coaching experience as manager of the Cleveland Indians (2003-09) and the Seattle Mariners. In 2007, Wedge was awarded the AL Manager of the Year after leading the Indians to the ALCS, and by winning 96 games. This is his first time being the coach of a college team.

The Shockers finished this past season with a 28-31 record under Butler. During Butler’s tenure with the Shockers, the team only finished above .500 twice in six years. His overall record at the school was 169-180-1, and he failed to make the NCAA tournament every year.