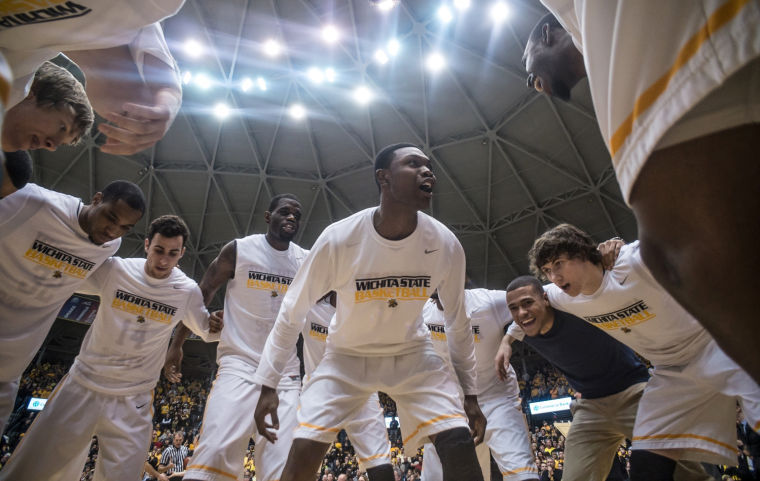 Senior Cleanthony Early gives a speech prior to the WSU NCCU game Sunday night inside Charles Koch Arena.The Shockers went on to improve their undefeated record to 12-0 as they defeated North Carolina Central with a score of 77-66. Early got his first double-double of the season with 16 points and ten rebounds.

Wichita State’s team, the Aftershocks, will host regional games at Charles Koch Arena. The Aftershocks first game will be against Iowa United, a team made up of Iowa, Iowa State and Drake graduates. A win in its first game means a potential match-up with Self Made, the University of Kansas alumni team.

Which eight teams will advance to Championship Week in Chicago? Who will take home $2 million?!?#TBTFAN pic.twitter.com/eQkpXmwYZn

WSU’s team earned the No. 2 seed for its region.

ESPN released its rankings for all 64 participating teams as well on Tuesday. The Aftershocks came in at No. 15, the third best in the region behind No. 5 Golden Eagles made of Marquette alumni and No. 9 Self Made. The No. 1 overall seed Overseas Elite is 25-0 all-time in the tournament, with three straight championships.

Notable talent in the Wichita Regional includes former NBA players Dwight Buycks for the Golden Eagles, Darrell Arthur with Self Made, Cleanthony Early and Toure’ Murray with Aftershocks and Chris Copeland and Marcus Hall with Team Colorado. Michael Beasley, who played last season with the Los Angeles Lakers, will suit up for Purple and Black, Kansas State’s alumni team.

The first, and only, female participant will also play in the Wichita Regional. 2019 national college women’s player of the year Megan Gustafson will suit up for Iowa United, WSU’s first opponent.

The winning team of TBT will take home a $2 million grand prize. The Aftershocks first game will be on July 25 at 8:00 p.m. CT and will be broadcasted on ESPN.