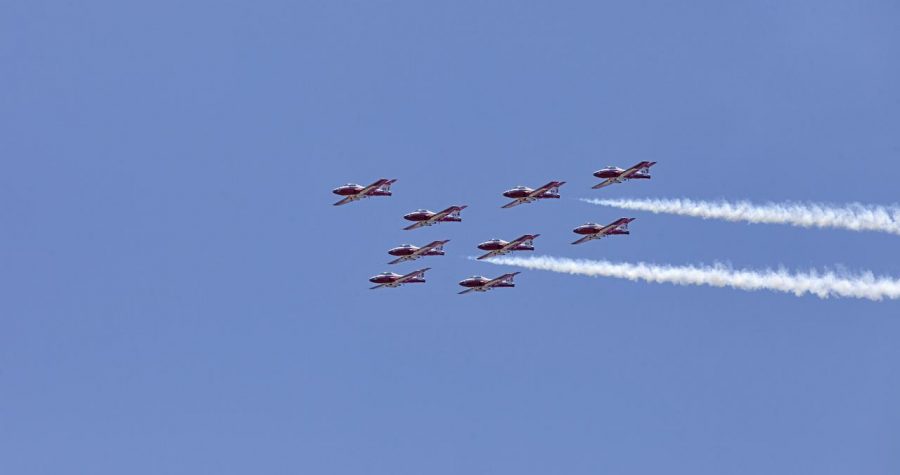 Canadian Forces Snowbirds fly in formation over NASA's Kennedy Space Center in Florida during a practice flight on May 9, 2018, between their scheduled U.S. air shows.

Thanks to a $750,000 grant from NASA, Wichita State University will lead a research effort with two other colleges and three businesses to develop technology that would reduce noise from aircraft.

The research project will be conducted in collaboration with the University of Kansas, Kansas State University, Honeywell Aerospace, Spirit Aerosystems, and ERG Materials and Aerospace Corporation.

Bhisham Sharma, a WSU assistant professor of aerospace engineering, is lead investigator on the project.

“In simple words, [the goal] is trying to make airplanes quieter,” Sharma said. “We will be focusing on developing new kinds of structural materials, which should help us absorb more of the sound which is coming out from the aircraft engines.”

The research is driven by Federal Aviation Administration (FAA) regulations that aim to reduce the general population’s exposure to aircraft noise. Those regulations directly influence the location of new airports and limit the growth of some current ones.

“The reason why we have airports located outside the city is because people don’t want to hear aircraft landing and taking off all the time,” Sharma said. “So every little bit of noise that we reduce, that helps.”

One constraint in reducing the noise, Sharma said, is to make sure that developed materials are still lightweight.

“That will also help with the fuel consumption because the lighter [an aircraft] is, the lower amount of fuel it will require,” he said.

Though it may seem like something from the distant future, flight noise will only get worse as companies like Uber look to develop air taxis and bring them into urban areas, Sharma said.

Engineering students researching alongside Sharma will be able to test materials on site at Spirit Aerosystems. Four undergraduate, one master’s, and two doctorate students are currently set to help with the project.

Brittany Wojciechowski, an aerospace engineering student, will assist with testing this summer at Langley Research Center in Hampton, Virginia — one of two NASA hubs involved in the research project. The other is Glenn Research Center in Cleveland, Ohio.

Sharma said the project will help prepare involved students for a career in aviation by providing practical, professional experience with forces in the industry.

“It gives them a lot of hands-on experience,” he said. “We have strict timelines. We are working with industry and with NASA folks.”

Sharma said the project has not been given an official start date. Funding from the NASA grant will span three years.

A faculty member since fall 2016, Sharma said he has been involved in previous research projects at WSU, but this is the first “major one.”

The grant will be awarded through the NASA Established Program to Stimulate Competitive Research. NASA uses the program to create partnerships among organizations in government, higher education and industry to address its research and technology needs.