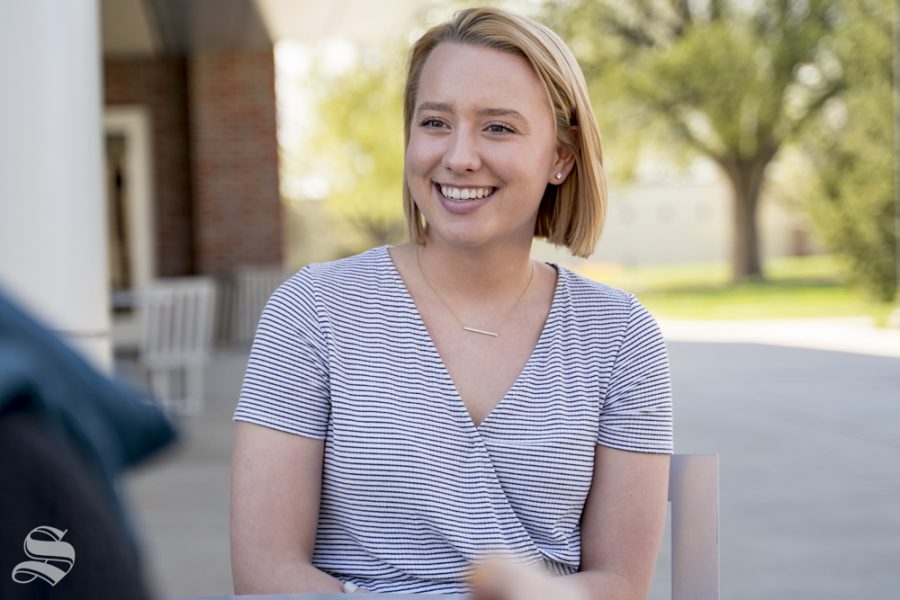 Kitrina Miller sits down in April for an interview with The Sunflower. (FILE)

Through a series of executive orders, Student Body President Kitrina Miller made interim appointments Tuesday to the SGA treasurer and student advocate positions.

The two appointees will need to earn approval from the student senate next semester before serving in a permanent capacity.

In May, the student senate voted down Miller’s first treasurer appointee, Dylan Jensen. With no other applicants coming forward since then, Miller tapped Yang to temporarily fill the role while SGA continues to solicit treasurer applications.

“[Yang’s] ability to adapt and persevere through the challenges faced by this position speaks volumes to her character,” Miller said in her appointment.

Yang graduates in December, so Miller hopes to find her replacement in the summer or early fall.

Miller appointed incoming junior Jozie Caudillo as interim student advocate. A social work major, Caudillo served as a liberal arts and science senator for a portion of the 61st session after her election in 2018.

“[Caudillo] has an immense passion for serving others,” Miller said. “She’s got great ideas to connect students to resources in better ways that haven’t been done quite yet on campus.”

One of Caudillo’s ideas is to create an organization called the Shocker Support Network that would work to inform students about on-campus resources.

Miller said about five people applied to be student advocate, but only three applicants met the position’s requirement of having attended a university for four semesters and Wichita State for at least two of those.

The chief of operations position, along with several senate seats, remains open. Miller says it’s been a struggle to find applicants.

“I think a big reason is the fact that it is summer now, and nobody’s really paying attention to on-campus jobs,” she said. “They’re enjoying the summer back home; they more than likely already have a job.”

Miller said it’s easier to reach people who are already in SGA than those who are not a part of the association.

To help attract external candidates, Miller said SGA will continue to host open houses and use its social media platforms to push information about SGA and its open positions.

She also hopes to set up a table at the upcoming on-campus job fair, which will take place from 1 to 3 p.m. July 19 on the third floor of the Rhatigan Student Center.