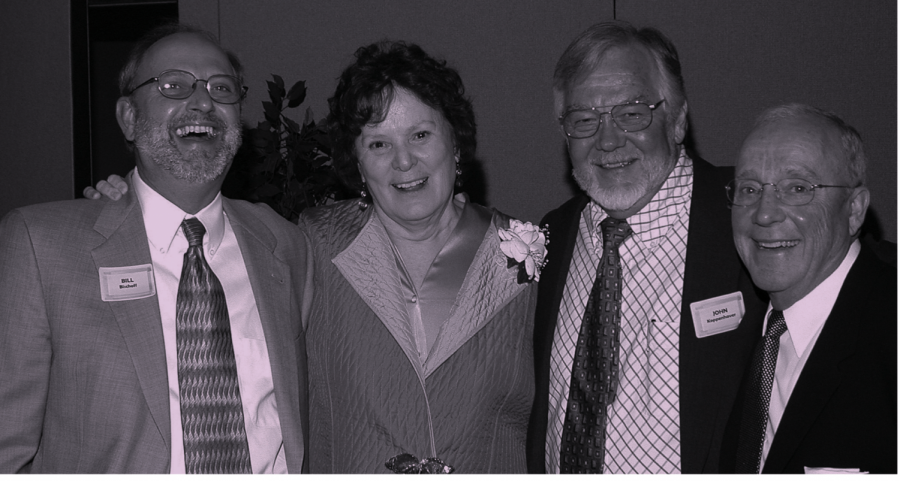 Carol Konek poses for a photo at her retirement dinner in 2005 with Bill Bischoff, John Koppenhaver and Paul Magelli. This photo originally appeared in the LAS Newsletter in fall 2005.

Throughout Konek’s 35-year career at WSU, she taught courses like English composition and global women’s issues while working to develop the women’s studies department into a renowned academic program. For 19 years, she was associate dean of the Fairmount College of Liberal Arts and Sciences and an associate professor of women’s studies until her retirement in 2005.

Konek, Sally Kitch, Dorothy Walters and Geraldine Hammond — all working in the English department — decided they wanted to start a program in women’s studies.

And they were able to do so by 1972, said Deborah Gordon, associate professor of women’s studies, in an email to the Sunflower.

“Carol always spoke very highly of this dean and (said) that she and her colleagues in English could never have started women’s studies at WSU without [him],” she said.

Magelli and Hammond, an emeritus professor of English, officially established the WSU Women’s Studies Department in 1970. Many women who were at WSU during the department’s early days agree that in addition to Konek, WSU owes a great debt to Magelli.

“I don’t know that women’s studies would have had the support that it had without him,” said Anita Skeen, a former English professor at WSU.

Skeen said the women who started the department used to joke that women’s studies was founded in a broom closet in Jardine Hall. Finding space for its programs was difficult as was figuring out who was going to teach the departments courses.

Women like Skeen worked double duty, teaching within their respective disciplines and picking up women’s studies courses over the years. She credits Konek with launching not just her career in academia but the careers of many women over the three decades that Konek was teaching at WSU.

While Magelli played a role in getting the department off the ground, it was Konek, Sally Kitch and Dorothy Walters who developed the Center for Women’s Studies into a nationally recognized program.

“(She) said exactly what she thought and stood up for and defended new young female professors who were just coming into the system,” she said.

Skeen ended up teaching in the English and women’s studies departments until she left in 1990 for Michigan, where she teaches literature and creativing writing at Michigan State University. She said she plans to retire next year.

Professor Chinyere G. Okafor, director of the Center for Women’s Studies, said many people remember Konek as a champion of women.

“She brought acknowledgment, confidence, high self-esteem, value and honor to women at a time when it was difficult to acknowledge women,” Okafor said in an email to The Sunflower.

“She emphasized that women should love and honor themselves before extending to other people. This was unique at a time when women would focus on giving to and sacrificing for other people.”

WSU AND BEYOND – KONEK’S MANY PASSION PROJECTS

Konek is remembered as a leader, both in and out of the classroom.

“Above all, her legacy lives forever in women’s studies and numerous lives she touched through her women’s rights activism,” Okafor said.

Beyond her immeasurable work at WSU, Konek was widely regarded as an activist. She traveled as a delegate to women’s rights conferences in cities such as Nairobi, Dublin, and San Jose, Costa Rica.

Konek was one of the few Americans granted visas to participate in the Fourth World Conference on Women, held in China. Before the Beijing conference in 1995, she traveled on the “Peace Train” with 232 women from 45 countries, meeting with women’s groups and parliaments from Finland to China.

Konek’s colleagues described her as committed, determined, kind and energetic.

“She was vibrant, irrepressible and inspirational,” Miller said in an email.

“(Konek) clearly articulated the benefits of a liberal arts and sciences degree while also encouraging students to be involved with activities on campus that would support their successes,” she said.

Konek earned her bachelor of arts at Kansas University, her master of arts at WSU and her doctorate in higher education at the University of Oklahoma.

Konek was highly involved in local and worldwide communities, working to champion the causes which were most important to her.

She was a radio talk show host for Live Line America on the Radio America Network. She was a researcher and author of numerous books, including a memoir called “Daddyboy” about her father’s battle with Alzheimer’s disease.

In the past, Konek has been honored with large pavers by Jill Docking and Gayle Davis; a bench from Jana, J.D. and Sharon and Jeff Konek; and a brick from Joyce Markley in the Plaza of Heroines.

“A sculpture, program, tree or some huge symbol will be a befitting symbol of appreciation by WSU,” Okafor said.

“No matter what period of life she was in, she loved her family so much. She invested a lot of time in them but also in anyone she met,” said Sarah Bagby, owner of Watermark Books and Cafe.

Bagby delivered Konek’s eulogy at the celebration of life service.

“She made you feel like life was full of possibilities.”