City launches electric scooter-sharing pilot program, but not at WSU 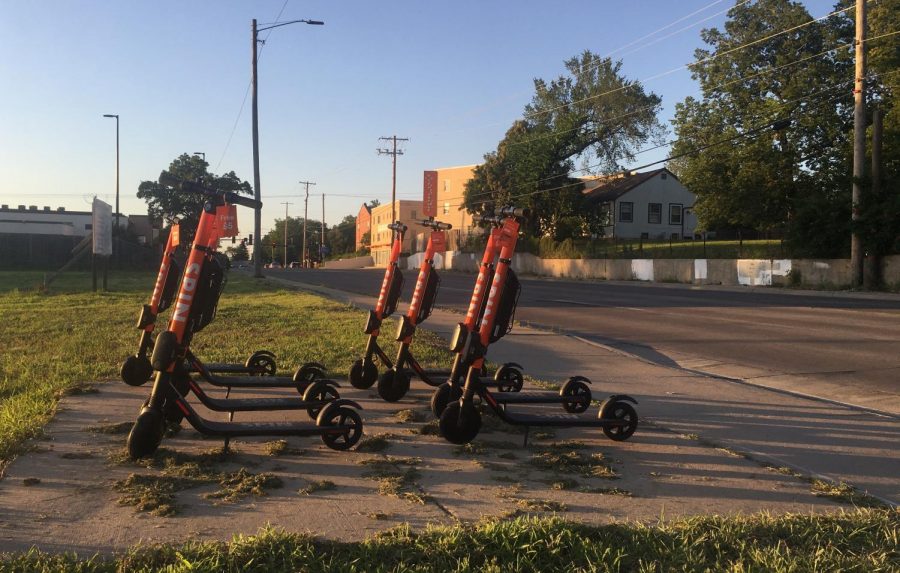 A fleet of e-scooters sit in an empty lot at 17th and Hillside near Wichita State's main campus. E-scooters are currently not allowed on campus.

Wichita State University students who want to use the new electric scooter sharing services on campus, prepare to be disappointed. Using the new e-scooters on WSU property is currently off-limits, and the future of riding on campus remains uncertain.

Noah Foster, a junior studying aerospace engineering at WSU, is frustrated by the situation. He’s the guy behind the successful launch of Wichita’s scooter sharing initiative.

Foster said he wanted to make moving around on campus more efficient and accessible. He tried to get scooter-share locations on campus not just because they’re fun and fast, but because they help address issues at WSU like inadequate parking, he said.

“I thought about transportation on campus, like inside of campus, to make it faster for students to get to like the John Bardo Center (formerly known as the Experiential Engineering Building) and places like that which are a lot further away than the RSC and the dorms and stuff,” Foster said.

He contacted Garrett Rothstein, a representative from Bird, an e-scooter company based in Santa Monica, California and got the company interested in WSU as a possible location for an e-scooter campaign.

Rothstein flew to Wichita earlier this year to meet with Foster and WSU officials about e-scooters on campus, Foster said.

“I guess I was the first person from Wichita at all to contact and have interest in the scooters and so Garett kind of went on his own with his pitch and pitched not only to us but the city of Wichita,” Foster said.

The idea progressed from there.

“We had them on campus for one day to try them out,” he said.

Though the city launched its scooter program on Monday, there are no deployment locations on campus.

Foster said Bird scooters would be coming to Wichita, but he’s not sure if that’ll include WSU’s campus.

Rothstein contacted him recently expressing ongoing interest in bringing scooters to the university.

“They’re finishing up the process of getting scooters into the Wichita area and asked us to just kind of reiterate the idea of getting them on campus since it’s kind of a grey area right now,” Foster said.

Foster said he’s actively looking for the right people at WSU to get on board with the initiative to get scooters deployed and allow riders on campus. So far, he said, he’s had no luck in moving the concept into the decision-making phase.

Now that the city has launched its scooter pilot program, Foster said WSU would be forced into making up its mind and creating policies around their use on campus.

“At this point, they’re going to have to make a decision either way about whether or not we can have them,” he said. “I definitely began the idea. I think at this point it’s my responsibility to make it happen.”

The Sunflower contacted Spin — the company that partnered with Zagster to launch the Wichita scooter-share service this week. Spin officials confirmed that WSU is a no-ride zone. But riding Spin scooters on campus is not just off-limits, it’s not even possible.

“If a rider attempts to scoot on Wichita State’s campus, there is a GPS geofence that will slow down the vehicle and cut power to the device to indicate the rider is in a no-ride zone,” Senior Policy Communications Manager Maria Buczkowski said in an email to The Sunflower.

Users who are on campus also see a message over a map of campus saying, “Please do not ride here. We may have to suspend your account for repeated violations.”

The Sunflower asked Buczkowski if Spin was in talks with WSU and if they would be setting up shop on campus.

“We work with campuses specifically and adjust to their needs. At this time, we have nothing to share about Wichita State University,” she said.

“We haven’t committed to anything. We’re dedicated to ensuring that our micro-mobility options are going to get people to and from where they need to go.”

Because his position is new at WSU and Morel didn’t begin the job until June 3, he wasn’t a part of the initial conversation between Foster and Bird representatives.

Morel did not know about Foster’s campaign to get e-scooters on campus, he said.

The Sunflower asked Morel if he’d be willing to bring Foster in on the conversation now that he’s aware of his goal.

“We want to hear from all sides and make the most informed decision that we can,” he said.

Micro-mobility in the city of Wichita

Wichita partnered with Zagster, a venture-funded startup company based in Cambridge, Massachusetts that designs, builds and operates e-sharing programs, for its new micro-mobility sharing programs.

Micro-mobility is a concept that’s developed around new forms of transportation like e-bikes, e-scooters and pedal bikes.

Now Zagster plans to operate more than 500 scooters in the city as well.

The company partnered with Spin – the e-scooter startup out of San Francisco, to bring scooter-sharing to the city. Zagster handles program operations, but their scooters are provided by Spin.

Expect another 650 e-scooters in a couple of weeks from two other e-scooter businesses – VeoRide, based out of Chicago, and Slidr, based in Naples, Florida.

Wichitans can rent scooters at stations around the city with each company’s phone apps. They’ll all cost the same – $1 will unlock a scooter and users pay 15 cents per minute to ride.

Many scooter rental locations will be put at sites that already have bike sharing racks, city officials said.

Mayor Jeff Longwell wore a helmet as he spoke to the public at the e-scooter launch in downtown Wichita on July 15, but he didn’t ride one of the scooters, saying he had a stunt double for that.

The helmet was a reminder to people that though helmets aren’t required by law, they’re highly encouraged for all riders.

“We are rolling along with some improvements to our city to make Wichita a destination city while working to implement quality of life with amenities like scooters that will make Wichita a more attractive place to call home,” Longwell said.

While some cities are relatively lax when it comes to regulating e-scooters, Wichita has more rules than other communities where similar initiatives have launched.

Operating or parking scooters is prohibited in some areas and city staff can immediately impound any scooter that’s blocking traffic or creating a hazard. Users can get a ticket if they break traffic laws. Scooters also automatically shut down at dusk or 9 p.m., whichever comes first. The top speed of rental scooters is 15 mph.

Other rules for e-scooters include:

▪ No riding on sidewalks