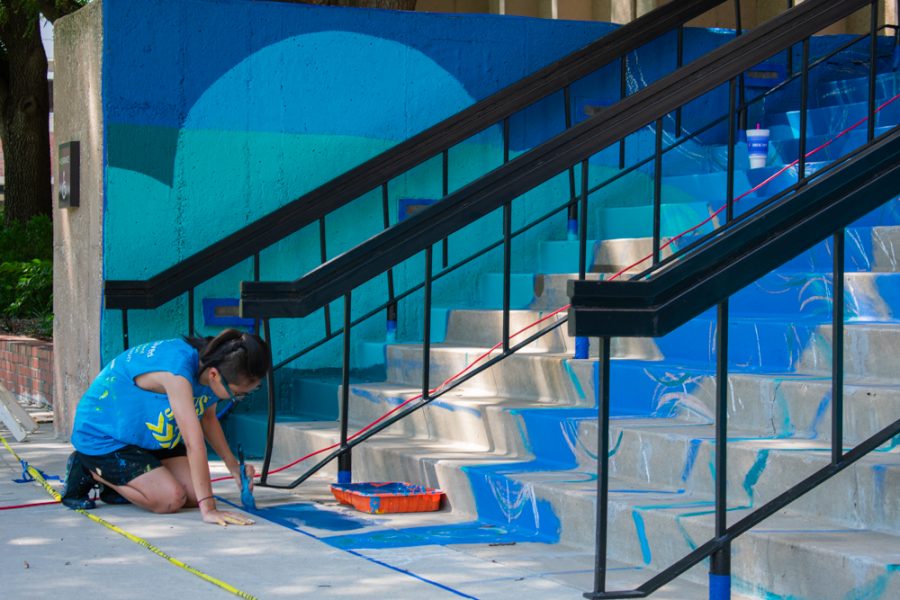 Sarah Myose, a senior honors baccalaureate student studying art and sociology, applies mixed paints to their work on the south side of Clinton Hall. The piece will be done for the start of the fall semester.

With wishbones, wheat stalks, and shooting stars sparkling across the mural, “Dreams and Wishes” is the latest artistic achievement in Wichita State’s placemaking initiative.

“When you blow a dandelion, you make a wish. That’s where my initial inspiration came from,” said Sarah Myose, the artistic director behind “Dreams and Wishes.”

Myose, a senior pursuing an honors baccalaureate in art and sociology, applied to a competition to paint the steps in July.

Myose has helped their sorority, Sigma Psi Zeta, paint murals, but this is their first time directing one.

“Initially, my work plan had been until September — the application said it didn’t have to be done until October,” Myose said. “And then they met with me and were like, ‘we want it done before school starts.’”

Myose expected to have at least six weeks to complete the mural. They were only given three weeks, start to finish, to complete “Dreams and Wishes.”

Myose said they remember thinking, “I don’t know how this is gonna work, but we’re just gonna do it.”

Ty Tabing, a WSU alumnus, is the face behind the placemaking project at WSU. Other placemaking projects include the Shocker Pods and Wulips. Together with the help of Kristin Beal of the College of Fine Arts, the project came to fruition.

“They put a lot of trust in me, which really helped,” Myose said. “That’s a lot to put in for someone who’s 21 years old and hasn’t had professional experience.

“I was there every day. During the last week, I was there morning to night.”

They spent one week cleaning and repairing the staircase and two weeks sketching and painting.

“I initially wanted to do a grid to get the design on,” Myose said. “When we got there and started measuring, we realized it was impossible. We just had to eyeball everything.

“We would chalk one line, then we’d walk all the way back to the quad. We would check and see if the line was correct, and then we would go back and either correct it or make the next line.”

Myose had to rely on their gut instinct to carry them through the project. Due to the incredibly short time span, there was no time for mistakes.

After two weeks of working in the scorching summer sun nonstop, Myose got sick — really sick. They couldn’t leave their bed, but the mural deadline was looming.

“My mom is an artist too, and her support pulled me through it,” Myose said. “She was like, ‘Sarah, you’ve got to do this.’”

Myose deliberately chose not to include their signature or name on the mural.

Myose gushed, reminiscing on the chaos of the last three weeks.

“It was worth it. I still can’t believe it happened,” Myose said. “It’s a dream come true.”