Queen of the Renaissance

One drag queen's quest to bring her fantasy to fruition 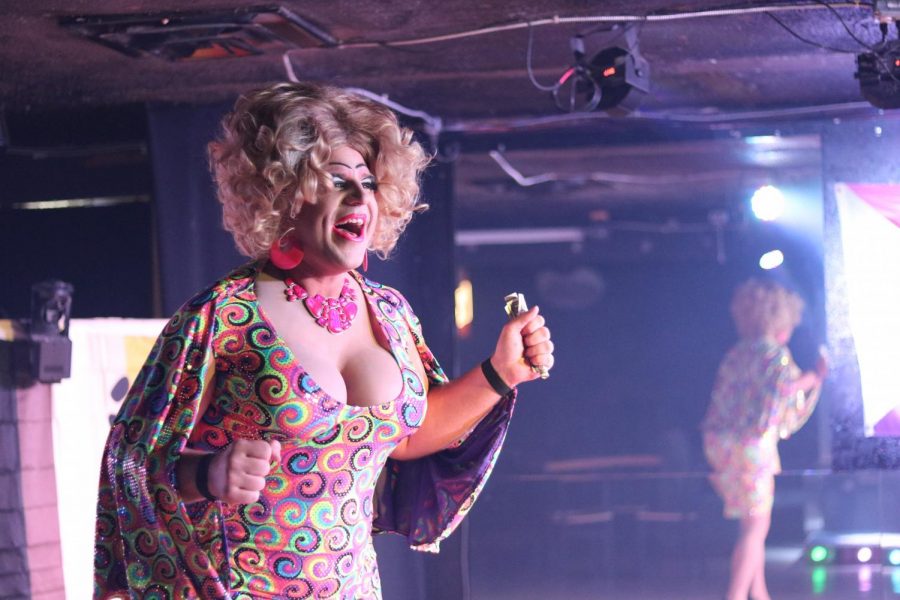 It was New Year’s Eve in 2008, and Brad Thomison had just gotten out of church. A weekly tradition, Sunday night thrift shopping, led Thomison to a fluorescent pink prom dress embellished with glittering gemstones that fit him just right.

He had seen his friends dress in drag before, but never participated in it himself. The promise of a new year with new opportunities was lingering in the air. “Tonight’s the night, let’s do it.”

When Thomison was first starting out in drag, he had plans to attend a seminary and get a “Master’s of Divinity.” Contrary to the seminaries Catholic priests study at, the seminary Thomison describes is simply higher education in a theological space.

Quintessentially, he was pursuing a master’s degree in divinity. He attended Phillips Theological Seminary for a little over a year, but then life took him on a different path — a path where his drag persona, Divinity Masters, was born.

Thomison recalls the people, places, and events that led him to this point in his life — Fantasy, Fritz Capone, Caliente Amour, and Lacey Jade in their Friday-night Triple Threat, and his drag mom, Monica Moree.

Festive in nature, a Halloween performance would mark Thomison’s next drag appearance — this time, making a debut as Divinity Masters.

One performance was all it took for Divinity Masters to be invited on as a cast member at Fantasy. In drag speak, guest performers are invited to do a show, then they’re gone. Cast members are part of a weekly ensemble.

“Drag queens often have different skills or expertise,” Thomison said. “Some drag queens really focus on hype music and amazing dances and a lot of energy energetic on stage, some drag queens focus on being really elegant. My style is what we would call ‘campy.’”

After a year of performing weekly at Fantasy, Masters decided to leave the show. Fritz Capone died shortly after. Lacey Jade has passed away since then, too. Fantasy Complex, the gay bar they worked at together, closed in 2015.

Fantasy closing left a hole in the Wichita LGBTQ community.

“At the time, there were some other [gay] bars in town, but none of them had really focused on entertainment. That was the role of Fantasy,” Thomison said, “My partner and I saw that as an opportunity to primarily give drag a space.”

An entrepreneur at heart, Thomison already had plenty of experience operating his own business. He has owned Light and Sound Spa for eight years and created Masters Entertainment, under which he houses DJ Tetris, Divinity Masters, and other hosting and entertainment services.

“We can do this —this is something we can figure out.”

He said he quickly realized that he had “grossly underestimated the amount of time and work and energy and stress” opening his own bar would require. Thomison believed in the value that it brought to the LGBTQ community enough to push through —“Our community needs this type of space.”

The energetic name was inspired by a rocking chair.

“For some reason, I was thinking about names, and I glanced over and thought it looked kind of like a boomerang,” Thomison said.

That was the moment lightning struck. He quickly began designing logos and imagining catchy slogans for his next passion project —Club Boomerang, “You’ll want to come back for more.”

Divinity Masters made an appearance at charity events and a couple shows here and there, but it wasn’t until Club Boomerang opened that she started performing more regularly.

“At our one-year anniversary, I took over hosting our Thursday night show,” Thomison said.

“We’re not just a bar,” Thomison said, “We are a place for the community to gather, feel safe, and be entertained.”

Club Boomerang does what all other bars in town are too squeamish to attempt — host a youth night for underage patrons. Every “fifth Friday,” Club Boomerang opens its doors and invites teens aged 13-17 for a supervised night with their parents in tow.

“I can remember my first time going into a gay bar at 18, by myself, scared, not sure what I would encounter, and not really prepared to be in that space with adults,” Thomison recalled. “I see a lot of value in creating a unique space where young people can come with their parents. In that comfort, they make better decisions.”

Looking at his life now, Thomison said he’s “in a season of personal renaissance.”

Up until late July, Thomison worked as the LGBT Coordinator in the Office of Diversity and Inclusion at Wichita State. He left that position to work as a car salesman at Subaru, “which is a significant diversion from my career up to this point,” he said.

“What I’ve learned is that I spent a lot of time doing jobs that I loved that didn’t pay very well,” Thomison said. “I’m in a season right now where I’m trying to focus on financial independence.”

“Leaving Wichita State was a very hard decision,” he said. “I absolutely loved what I did. I loved who I worked with.

“I was in a position where I needed to focus on income for a little while. My hope in leaving is that I am creating an opportunity for a young professional to step into a role that was well-established and had a path to follow. Fortunately, ODI and Danielle Johnson have been doing great work,” Thomison said.

Between his new job at Subaru, owning Club Boomerang, Masters Entertainment, Light and Sound Spa, as well as a handful of other entrepreneurial excursions, Thomison works 80-90 hours a week, easy. He averages about five hours of sleep at night, he said, and is a self-proclaimed “master of power naps.”

“I couldn’t do 80 hours of work on things I didn’t like,” Thomison said. “You find energy for things that excite you. You learn how to make it work.”

Thomison said he’s motivated by a goal of becoming completely debt free in the oncoming year.

“We started [Club Boomerang] with nothing,” he said.

The thought of paying off his entire investment in six years is keeping him running, he said. Dreaming of days when he can be completely self-employed, Thomison said he wants to use his time and energy to create safe environments and lift communities up.

A mission that began on a cold December night in 2008 still persists today. Thomison’s dressing room/office in Club Boomerang now holds dozens of frilly and fluorescent dresses —a trend that would never have started if it hadn’t been for that first pink gown.

Regardless of the season of his life, Thomison remains steadfast in his mission and welcome to growth.

“Sometimes, you have to do a thing that you don’t want to do for a while — sometimes, your experiences will suggest an alteration or a different path,” he said.

“If you focus on what you didn’t do, you miss the opportunity to appreciate what you have done. Refocus on what’s possible, and continue looking.”

And continue on he will.