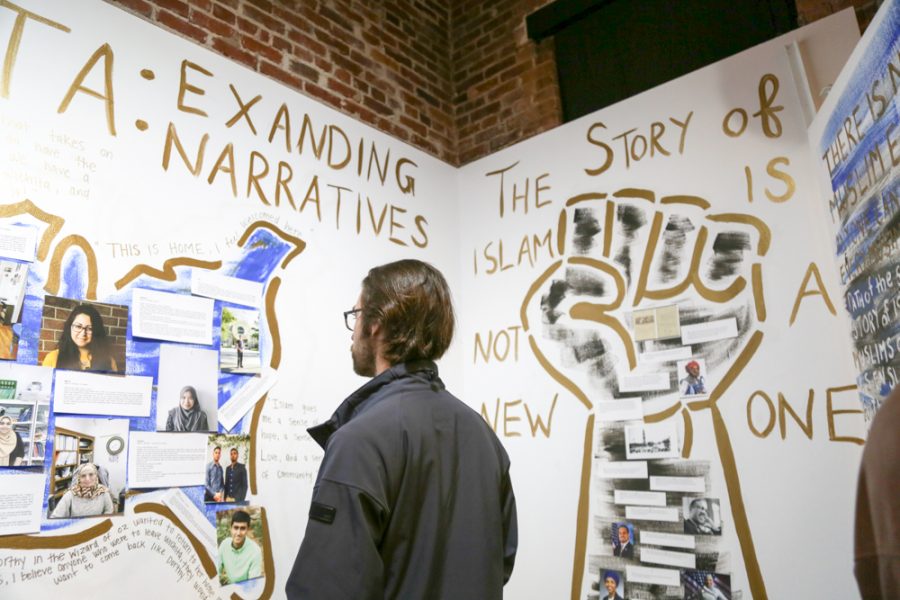 People look at the artwork at the Muslim Student Association's Shiftspace gallery at February's Final Friday.

Many cities around the country have already made the switch. Wichita will be the latest to hop on the trend.

However, some artists say they believe the change may negatively impact their monthly income.

Thomas Dalton, marketing chair for the Wichita Arts Council, said that while he understands the artists’ frustrations, the switch will be a net positive for the arts scene and the artists.

“There was a distinct lack of art purchasing during Final Fridays,” Dalton said.

Switching to First Fridays will permanently avoid the conflicts of the art crawl being held around the holidays, which would mean more potential sales for artists, Dalton said.

Javan Andrew, artist and owner of J. Andrew, said that while it won’t be a huge blow to him personally, he and other local artists will definitely feel the effects — at least in the first few months.

“Final Friday is our perfect way to pay rent,” Andrew said. “It is the last Friday of the month. Most people have a little extra money left over. They can go out, they can support, they can buy things.”

Several artists in Wichita rely on Final Friday to help pay a bulk of their bills, Andrew said. He said he thinks artists are going to suffer because the public will forget about the change.

“It’s going to take time to retrain the public to come out,” Andrew said.

While the arts council does not manage Final Fridays, Dalton said they will provide sufficient coverage of the switch so that potential buyers will be well aware of it before the first event comes.

“They might be aggravated now, but they’ll come around once they see that everything is improving in terms of art sales and people coming out,” Dalton said of the artists.

Nearby cities such as Kansas City, Tulsa, and Denver have already made the switch to First Fridays. Andrew and other artists were able to regularly take advantage of the different dates.

“I personally will go up and do First Fridays in Kansas City the week after I do Final Fridays in Wichita, and that allows me to show my art in two different cities and earn a little extra money,” Andrew said.

He said he believes this is a huge selling point for keeping Final Fridays in Wichita. Dalton said he has talked with other artists who share similar sentiments.

“It’s one of those unfortunate byproducts of switching over,” Dalton said. “That opportunity might not exist anymore, but the increased turnout or increased awareness of First Fridays might offset that.”

Some artists, including Andrew, say they’re frustrated because they feel they didn’t have a voice in the decision to change to First Fridays.

“I feel left out of the conversation,” Andrew said. “The formal poll that the Wichita Art Council put out only went to a few gallery owners.”

Small galleries and local artists who depend on Final Fridays to pay their bills did not receive the poll, Andrew said.

A press release from the council explained that the poll was sent to venues that consistently submitted listings to the Final Friday Calendar.

Because there is no one major body controlling First Fridays, the final decision will be up to the venues and artists as to whether they want to participate in the switch or continue Final Fridays on their own.

“Final Fridays, and now First Fridays, was a grassroots movement sort of born out of the local galleries, and we’re just here to support those events as best we can,” Dalton said.

Regardless of what day the monthly art crawl is on, Andrew said he’s optimistic that both the public and the artists will eventually catch on to First Fridays.