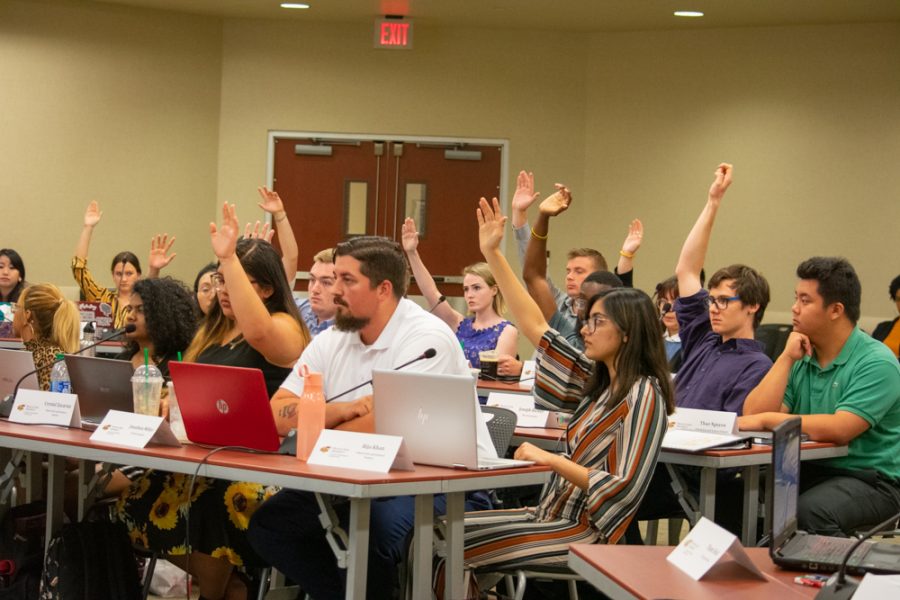 “Shockers for Life aims to bring awareness and conversation about the topic of abortion in a peaceful and respectful way,” said Mariah Stuever, president of the organization.

At last week’s senate meeting, Stuever said the group wants to table in the RSC and host events to raise money for pregnancy resource centers and pregnant students.

During debate, some senators said they didn’t personally agree with the group’s politics, but they didn’t feel it was their place to vote against RSOs based on personal beliefs.

“I think it’s important that it’s our job as senators not to vote with our own personal biases, but also to consider our constituents whose beliefs don’t align with our own,” said Underserved Sen. Eli Flores.

In 2017, SGA faced national backlash after it voted not to recognize a WSU chapter of Young Americans for Liberty, a nationwide libertarian group that advocates for free speech on college campuses. The organization has a controversial reputation, as some believe certain chapters have promoted hate speech.

Sen. Thao Nguyen expressed some of the same sentiments as Flores, sharing an experience from a Catholic university he previously attended.

“For me, it was really difficult when an organization that was trying to become a [RSO] in support of LGBT was turned down,” said Nguyen, who identifies as a member of the LGBT community. “Applying that experience to this, if we were not to approve this, I think it would be difficult to make an argument about why.”

According to the bill recognizing Shockers for Life, the group’s purpose is to “establish an active pro-life culture among the youth of our community by educating our peers on life and by actively promoting the right to life for all persons (pre-born and born).”

Some senators expressed concerns that the organization’s mission could be exclusionary.

“By allowing a certain group to advocate for any sort of restriction of rights or freedoms based on ideals not represented by the whole [student body] is inherently not inclusive,” said At-Large Sen. Mathew Tucker.

Stuever said Shockers for Life would be open to discussing abortion with people who hold opposing views. Those people would also be allowed to join, she said.

“While I realize that not everyone will agree with what our group is advocating for, members will be expected to respect anyone who engages with our group,” Steuver said before the group was recognized. “And I am asking all of you for the same respect for Shockers for Life.”

Ultimately, the Student Senate voted to recognize the group with 21 senators in favor, none opposed, and 20 abstaining.

During the remarks and announcement portion at the end of the meeting, Underserved Sen. Aonya Kendrick said she was bothered by the senate’s vote over Shockers for Life.

“It was brought up that we didn’t want to create media backlash or a firestorm or mention anything controversial,” she said. “I just want you guys to be bold; I want us all to be bold and have the audacity to actually legislate.

“This is basically what we have to do — make tough decisions.”