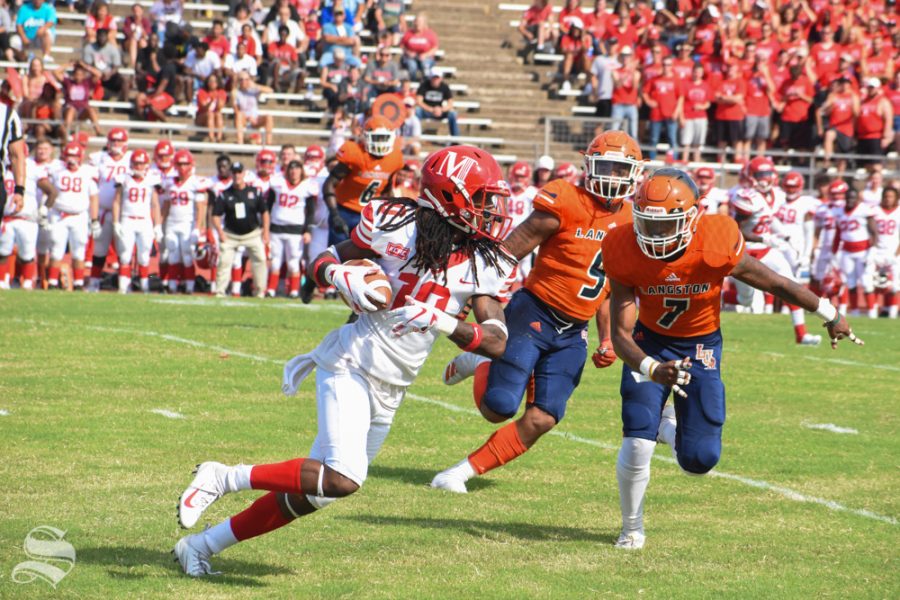 Eman McNeal, a senior tight end for the Bulldogs, runs the ball to the end zone while senior James Cox, a linebacker, and junior Quante Hayden, a defensive back, move to tackle. The game between the McPherson Bulldogs and the Langston Lions took place on Sept. 7 at Cessna Stadium.

Correction: This story has been updated to reflect the correct number of years since the last collegiate four-year football game was played on campus. According to The Wichita Eagle, the last game played in Cessna Stadium was on Oct. 17, 2004 between Northwest Oklahoma State and Langston University.

On Saturday, Langston University played McPherson College in Cessna Stadium for the inaugural Heartland Classic. This was the first time a four-year collegiate level football game was played on WSU campus in at least 15. It was also the first time any school from either conference had played each other.

After a rough first half for McPherson, they were able to come back in the second half giving them a chance to tie the game, but they missed a two-point conversion. Langston University won 21-20.

While the game was exciting, the Heartland Classic is more about bringing together the communities and showing them Wichita. Hosted by the Heartland Wichita Black Chamber of Commerce and Wichita State University Diversity and Community Engagement, the event’s motto was “unity for the community.”

“Us not having a football team, we kind of miss moments like this – to have tailgating, bands, presidential luncheons. The part of diversity that we really need to touch upon is bringing people onto Wichita State University campus to see what we have to offer,” said Dr. Marche Fleming-Randle, Vice President of Diversity and Community Engagement.

Ticket sales from the event went to a scholarship fund provided by the Wichita Black Chamber of Commerce.

“We want people in this community to be concerned about all their students going to college and advancing in their education,” said Gregory Cole, President of the Heartland Wichita Black Chamber of Commerce. “We want to give more scholarships or raise the [amount].”

At halftime, before a performance from the Langston University Marching Pride, former WSU head football coach, Willie Jeffries, was inducted into the Wichita Black Chamber of Commerce Hall of Fame. Jeffries was the first African American head football coach in the NCAA. He coached for WSU from 1979-1984.

“Because it is the first classic and he was the first African American head football coach, we thought it would be appropriate to have him here today to kick off our first annual classic,” said Fleming-Randle.

In 1982, Jeffries coached WSU’s last winning season with an 8-3 record. He left WSU in 1984 to coach for Howard University. He coached at Howard for 5 seasons and closed out his coaching career at South Carolina State University. Wichita State was the only predominantly white university Jeffries coached for.

Wichita State hasn’t had a football team since the university discontinued the program after the 1986 season.

The program struggled to rebound after a plane carrying members of the team crashed into the Colorado mountainside in 1970, killing 31 passengers.