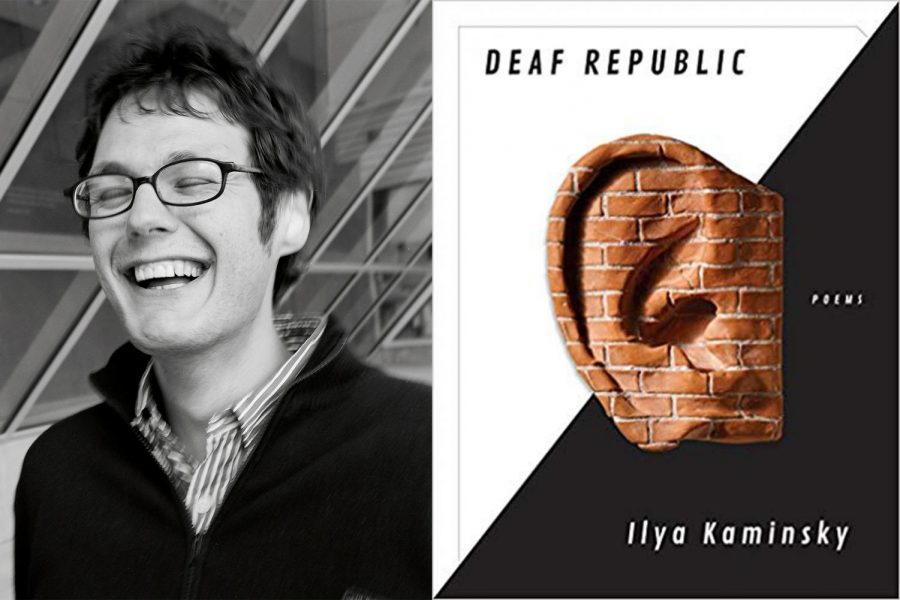 Hot off the success of his newest collection, “Deaf Republic,” poet Ilya Kaminsky is coming to Wichita State to share his work aloud. At forty-two years old, Kaminsky has already received nearly every coveted writing fellowship and literary journal publication in the nation. Kaminsky answered some questions for The Sunflower ahead of his reading at the McKnight Art Center on Tuesday, September 10 at 5:30 p.m.

SF: Even compared to other narrative-driven poetry collections, “Deaf Republic’s” storytelling and world building is incredibly strong. It feels like it was conceived as a whole rather than poem-by-poem. Could you describe your process in writing it?

IK: “Deaf Republic” begins when the pregnant woman and her husband watch the soldier shoot and kill the young deaf boy at the public gathering. As a response to this murder the whole community decides to protest by refusing to hear the authorities.

In the book, I am interested in seeing deafness as an act of protest, an act of resistance. In mainstream culture in USA, it is often seen as disability. But what if the tables were turned?

What could this fairy-tale, this fable, tell us about the world in which we live?

The world in which I personally live is that of a refugee. I come here from Ukraine, but for many years I lived on the border between USA, and Mexico. Just nine miles from the border. So, many images of violence on the border that you now see on TV, were a part of daily life I have seen for over a decade.

Now, to answer your question⁠ — I write in images, in bits of music, as a composition. So different images and phrases come together towards a larger whole.

Of course, as most writers I write out of my deepest obsessions. What before 20th century was called a Muse is really an obsession, yes? So the story gave a form to such an urgent need to find a way to describe the world in which one lives and since I am a lyric poet, to do so by the means of lyric poetry. Thus the story of “Deaf Republic” is told in poems.

SF: “Deaf Republic” does this odd jump between third and first person viewpoints ⁠— one minute, we’re watching a character through the eyes of a city, and the next, we’re talking straight to them. Did you ever wonder or worry about how a reader would be able to smoothly make those transitions? How essential is the feeling of shifting perspective to the work?

IK: As in many stories of our time, as well as in movies and other forms of story-telling, the reliable narrator is something that has become, for better or words, a thing of the past. After so many documented acts of violence, so many instances of fabricated news and so on, we fully realize in this time, and in this place, that there is more than one way to tell a story.

For the particular story at hand, “Deaf Republic”, it is also so important for the reader to be implicated, for the reader to realize that we, readers, are a part of the crowd that stands and watches the murder happen ⁠— and does nothing. So, I wanted the reader to ask: who is this “we” of the story? Who is this “I” of the narrator? Where am I in all this? What side am I taking? That is simply because we have to ask ourselves such questions on the daily basis in USA today. And, of course, also in the rest of the world.

SF: The illustrations of sign language throughout the book make for a really engaging (fun, really!) experience. It almost feels as if we’re given a decoder watch that comes with the book. What made you decide to include that other form of media in the book, and what inspired you to go beyond simply printing words on the page like we normally see in poetry?

What is the language of our response to violence? What is the language, private speech, of tenderness, of kindness, what is the source of that, and how do we express it? Who are we according to our language, our silence? How do we articulate this “ourness” in words, what happens when words are not enough?

So, in “Deaf Republic”, people communicate in signs as Sign becomes the language that is unknown to authorities, something that community can have that’s their own. And, the reader leans that language as the book proceeds, becoming thereby the part of that community, with all its joys and with all its guilts.

As for what “we normally see in poetry” ⁠— poetry is far from anything normal. Poetry is the kind of speech that (to misquote T.S. Eliot) is an assault of inarticulate. Poetry, at least lyric poetry, is always in search of new expression of what it is to be human, on this planet. And, if that poetry is successful, the reader is moved by the expression. It is my hope that the reader is moved ⁠— in one way or another ⁠— by “Deaf Republic.”

SF: “Deaf Republic” possesses an intense urgency, not only in the danger presented to its characters, but in its framing ⁠— it’s bookended with two political indictments of living a comfortable, detached lifestyle in a war-torn world. One of the huge successes of the collection, to me, is that it makes a great case for poetry’s ability to wake a reader up ⁠— to what is actually happening, what needs to be done, and the fact that we’re often sound asleep while the horrors we read in history books are happening in the present. Do you believe your job is done as a poet when your collection is read and someone moves to address the problems you give light to, or do you believe it’s also your duty to address the suffering of the world in another way, like volunteer work or political advocacy?

But if the language of a nation is in conversation with other cultures, other nations, other traditions, if it is open, it becomes fertile, it grows, many new possibilities are open that might not be open otherwise. That is why translation is so important, for example, to any literature’s growth.

Similarly, the language of authority is always full of abstractions, full of indictments that suck the life out of daily speech. The speech of kindness is full of particular, tenderness is always towards sounds, towards nouns, towards specifics of the world. The best in us is in love with images, with details, with music. Mothers singing lullabies to children reinvent language daily. They give it new life. That lullabying is at the heart of lyric poetry. Similarly, the cries at funerals, are filled with music of the human, very individual music.

The poet’s job is to articulate that individual, authentic music by the medium of nuance and intricacy ⁠— however simple or not simple ⁠— we know as lyric.

Thus the poet cannot lie. As soon as the poet begins to lie, the language dries up. We see that happen in so many aspects of our public life.

The hope for language that we have as humans is that is the last thing that we still have when everything else is taken away from us. It is something that no power on earth can take from us.

And the hope for poetry, for poets, that we have as humans, is that it will keep our language true.