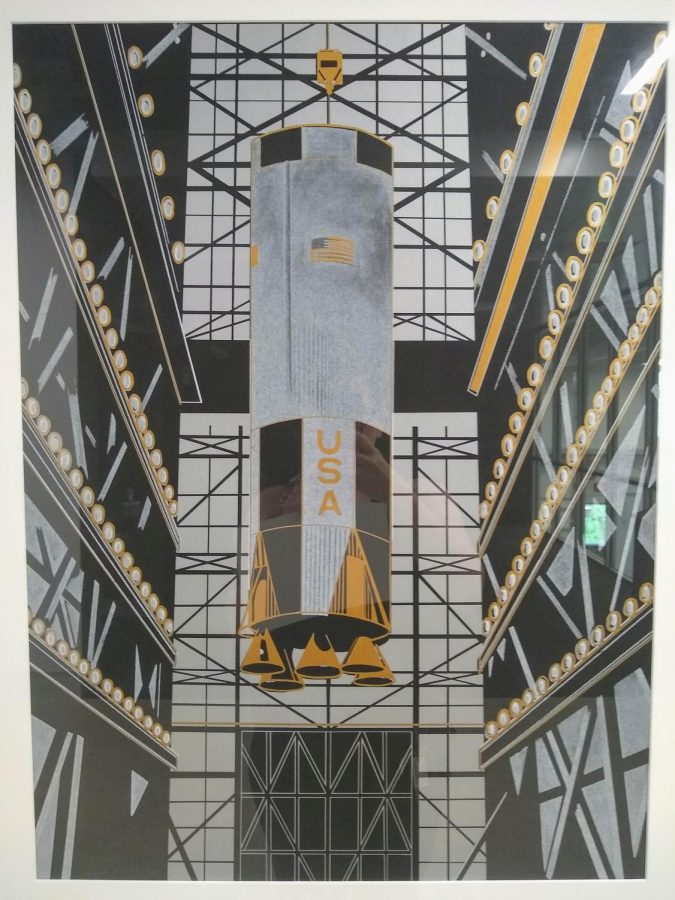 Half a century ago, people around the world celebrated as Apollo 11 landed on the moon. Now, thanks in part to Ulrich Connections (a pilot program of the Ulrich), an art exhibit on campus serves to remember and revitalize the excitement and awe surrounding space flight.

“Lowell Nesbitt: Apollo, 1969” features nine stylized prints made by the American artist. His striking, behind-the-scenes work depicts NASA training and technology. Nesbitt, commissioned by NASA to pay tribute to the Apollo 9 and 13 missions, produced the work from 1969 to 1970 during his time at Cape Canaveral. NASA accurately predicted that he would document the space missions in an accessible, exciting way.

The prints are bold pieces that tell the narrative of an important time in American space history. In Lunar Module, one can witness how Nesbitt’s loose style allows him to purely represent larger ideas. A jumbled, bulky machine fills the center of the frame, with loose wires running fluidly off to the side. A hint of a staircase takes up the left quarter of the print. Everything seems to be in motion, as if the whole thing might topple. In this way, Nesbitt effortlessly imbues machinery with humanity.

Nesbitt, considered part of the Photorealism movement, pushes the boundaries of this categorization with distortion and stylization. The prints are straight forward with minimal colors: gold, silver, black, white. Shape and pattern take precedence over surface details. Incongruously, Nesbitt’s prints resemble Edward Hopper’s paintings in the simplification of shape and use of strong geometric design. A clock in “Spacesuit Checkout, 1969” remains faceless; a switchboard has just a few dials. You get the point, Nesbitt seems to be saying. He’s interested in conveying representation, without getting bogged down in the minutiae. Perhaps this nudge into imagination makes the prints all the more engaging.

The NASA prints are well-regarded in the art world, but it was a different subject that ultimately solidified Nesbitt’s fame. He is most well known for his botanical depictions, which he painted in the 1970s. Nesbitt created giant, striking, hyperreal flowers that evoke drama and sexuality. The breadth of his subjects cannot be overstated ⁠— Nesbitt also painted his dog, computers parts, and men in the nude. But although his subject varied, his aesthetic remained relatively the same: loose, bold, geometric.

It’s not everyday that Wichita is home to such a rare and compelling collection of art. For a short time, the community has the privilege of appreciating this singular artist’s interpretation of an important era in American history.

The exhibit is on display on the second floor of the John Bardo Center (formerly the Experiential Engineering Building) through November 17. The exhibition is free and open to the public.