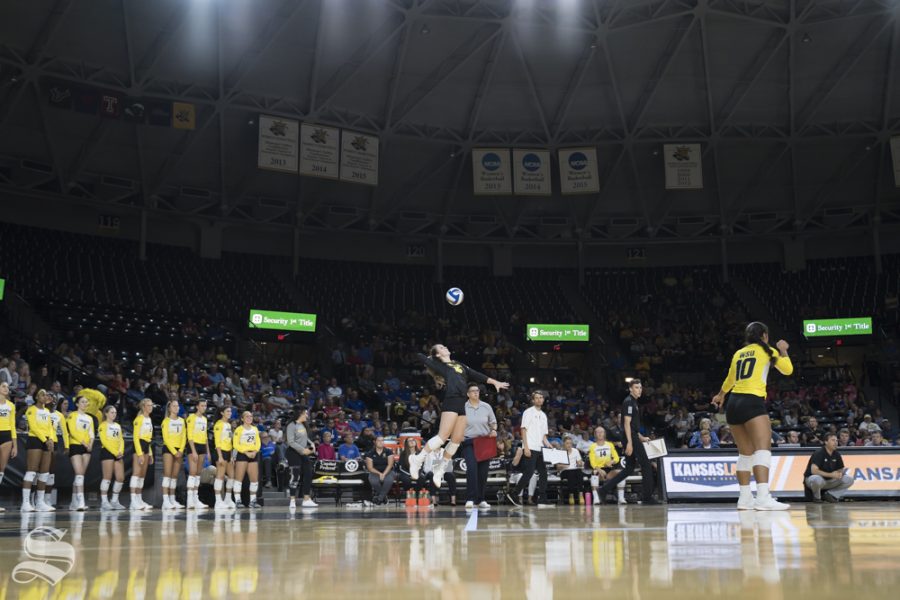 Wichita State senior Kara Bown serves the ball during the exhibition game against KU on August 17 at Koch Arena.

The team is coming off a weekend in California, where the team went 1-2 in the Mustang Challenge hosted by Cal Poly. Winning just one game during a weekend can be seen as a failure to most teams, but Bown is looking at the positives.

“We played some of our best volleyball of the season last weekend,” Bown said. “We did have some down moments, but offensively we did pretty well. We learned from our mistakes, and that’s what we are working on ahead of this weekend.”

Bown even sees the close loss to Cal Poly as a key stepping stone moving forward. The Mustangs were ranked in the top-25 to start the season, before losing three straight matches before the tournament last weekend. The Shockers still knew that Cal Poly was a tough match-up for anyone, and even held a late lead in the match before ultimately losing in five-sets.

“We learned a lot from the Cal Poly match, that was a good team,” Bown said. “On offense, we were hitting well. Our defense kind of slipped at times, and we had too many errors.

“Those are both things we are preparing for this weekend, and feel like that experience from last weekend will help us moving forward.”

For this week’s tournament, WSU’s opponents won’t get any easier. Two top-25 teams, No. 3 Texas and No.13 Brigham Young, will make the trip to Wichita, and another top-65 team according to RPI, Virginia Commonwealth, will also be playing in the tournament. But that isn’t a worry for Bown and the Shockers. The level of competition is bringing excitement to the team.

“We’re really excited, I mean we have some crazy teams coming in here,” Bown said. “We have nothing to lose either. We aren’t really expected to win these matches, but we are coming here expecting to get even more competitive and see what we can do.”

The Shocker Classic also marks the first time this season that volleyball will officially be played in Charles Koch Arena. On Aug. 17, the Shockers hosted an exhibition against Kansas, but it wasn’t an official match.

With it being the first official home match of the season, Bown is excited to feel the atmosphere inside the arena once again.

“I think we are going to have a really big crowd–we’re just super excited to have the energy on our side this time,” Bown said. “It’s definitely going to be something we feed off of this week.”

According to Bown, the Shockers are preparing for these marquee match-ups like any other match. She said that the team goes through everything they normally do. They take it seriously, and work on the things they need to work on.

“The preparation for teams like this is very similar,” Bown said. “The only thing different is that we have a little more room to be ‘satisfied’ with how we play, even if there is a loss.”

Bown also feels like these ranked matches before conference play will play a role in the team’s success down the road.

“These games are preparing us for conference for sure,” Bown said. “No matter the results, we are going to get better because of these games, that’s for sure.”

The Shockers open the tournament on Thursday against BYU. The team follows up with games on Friday against VCU and Saturday against Texas. All games that Wichita State plays in this weekend are slated to start at 7 p.m. CT.