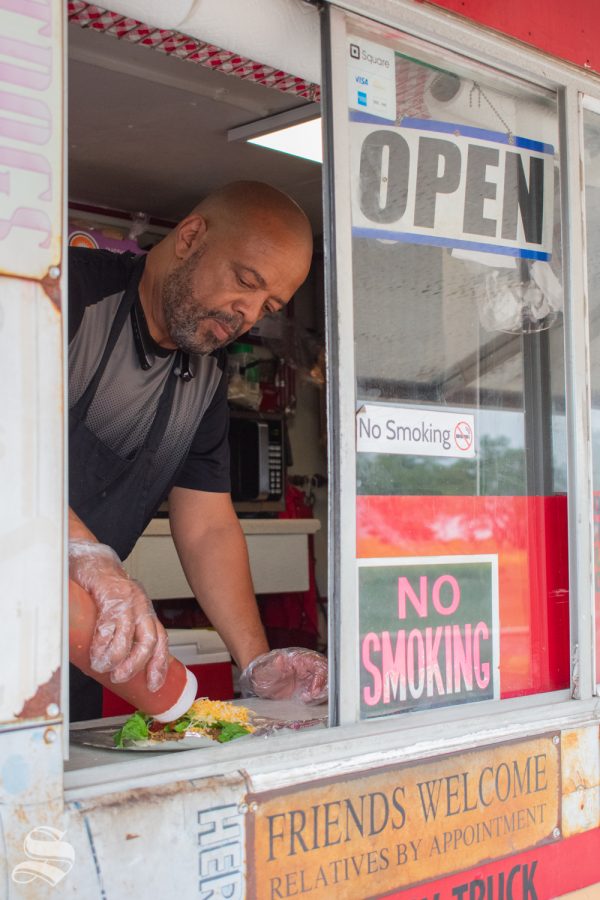 Arturo Ray adds finishing touches to a soft taco in the U-Hungry Truck on Sept. 9 at the Wichita State Food Truck Plaza. The U-Hungry Truck has many options to choose from, including a catfish dinner.

During a normal day on the Wichita State campus, Arturo Ray is cooking up new concoctions in his U-Hungry food truck. Business is hot or cold for any food truck on campus, just like it is for Ray’s. According to the owner, “90 percent” of the time is dead time.

On Monday, another normal slow day, Ray spent his spare time creating a new chicken alfredo recipe that he could add to his menu.

“I’ve been in business for years, about 10 years,” Ray said. “I’ve had the same menu, I want to keep some of the items on my menu, and give some a new look. On slow days like today (Monday), creating new menu items helps pass the time.”

Ray doesn’t complain about the slow service on campus though, as he sees the “bigger picture.” The Food Truck Plaza lies in WSU’s Braeburn Square, and just east of the Engineering Building. The entrepreneur’s eye is focused on what is to come in the future of WSU’s Innovation Campus resurgence ⁠— and not just what it is now.

“I’m looking down the road, I’m not looking in the now,” Ray said. “There was nothing up here. I’ve been watching all of this stuff – the lake, YMCA – come into the future, and with everything coming up, it’ll help business in the long run.”

The U-Hungry truck owner also sees his down time on campus as time to prepare for bigger days when he takes his business downtown. He’ll dice, chop, and get stuff ready for the days to come.

As for Ray’s food, his catfish is what makes him city-known. According to himself, Ray sees himself as the only truck in the greater-Wichita area that even sells catfish on the menu. It’s so popular that people from surrounding cities often make the trek out to Wichita just for Ray’s catfish.

“We sell more catfish on this food truck than anything,” Ray said. “We are the only food truck out of 30 to 40 food trucks, plus the 70-ish illegal trucks, that sell this fish.

We’ve even had people from as far as Hutchinson come down to eat here.”

The U-Hungry truck makes regular appearances at the Food Truck Plaza. Ray continues to express his hopes for an increase in business in the near future, but stands by his commitment to the truck even if in its worst days.

“It’s a good job,” Ray said. “Yeah, it can be slow, but it’s fun. I believe with the growth of this campus, our business will grow too.

“It’s just all about looking ahead.”