WSU drops home opener to No. 13 BYU in four sets 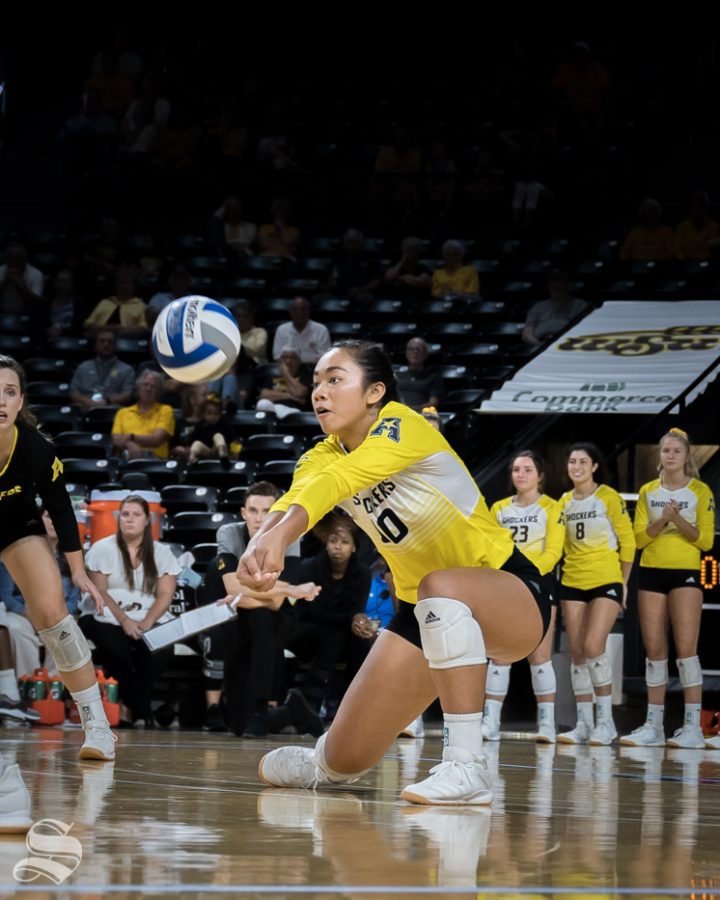 Wichita State freshman Sina Uluave digs a ball during the game against BYU on September 12, 2019 at Koch Arena.

Wichita State hung tough with the No. 13 BYU Cougars before ultimately falling in four sets in their home-opener on Thursday.

The Shockers took the first set but faced some adversity in the process.

Early on in the first set, the Cougars jumped out to an early 9-2 lead with a pair 4-0 runs, but the seven-point deficit would be the largest the Shockers faced in the set.  WSU hung around throughout the set before capitalizing on a key 5-1 run late in the set to tie the game at 21 apiece.

Wichita State then took their first lead of the match after a key substitution. Coach Lamb decided to bring on freshman Arianna Arjomad to deliver key serves late in the match. Arjomad delivered with a big 2-0 run, including an ace, to give the Shockers a key set one win.

“You saw that 9-2 deficit,” said Head Coach Chris Lamb. “We saw that 5-0 deficit against Cal Poly. In both cases, we rallied back and put some good out of it. That’s what I’ve noticed. It’s not that surprising to me.”

The Shockers continued to come back from each set, but ultimately they were unable to take another set from BYU.

Taflinger led the Shockers with eleven kills while freshman Nicole Anderson followed with 10 kills of her own. As a whole, WSU had a hitting percentage of .111 which is below their season average of .206.

“There’s a few things that we have to get a little bit better at,” Taflinger said. “When those things connect all together I think it’s going to be pretty deadly.”

Just like ten of her teammates, Nicole Anderson got the opportunity to play in her first regular-season game at Koch Arena. Despite not performing the way she hoped for, Anderson viewed the game as a learning experience.

“Walking out there I knew what the competition was going to be,” Anderson said. “I was excited for it, I think the entire team was. I didn’t perform the way I wanted to but I learned a lot of things from the match. I’m really eager to go out their tomorrow and learn from them and play better.”

With a young team, Lamb understands that it will take some time and is ultimately looking to see how the team will respond to adversity.

“I think everybody knows when you’re young and or new you can expect a low floor. You get that there’s going to be moments you can reveal how bad it can be,” Lamb said. “There’s a lot going on out there, there are really good teams on the other side of the net and they will show you what you’re not good at.

“There will be times when it looks bad but I’m interested in how high the ceiling can go and then get consistent as we go through the season.”

The Shockers will continue the Shocker Classic as they host VCU at 7:00 p.m. on Friday.

“These guys win a lot so they’re used to that and are expecting it,” Lamb said of VCU. “We took one from them at their place last year in a crazy match where every game seemed like someone was beating someone kind of badly and just happened to run away with the fifth.”