OPINION: I kind of get sports now 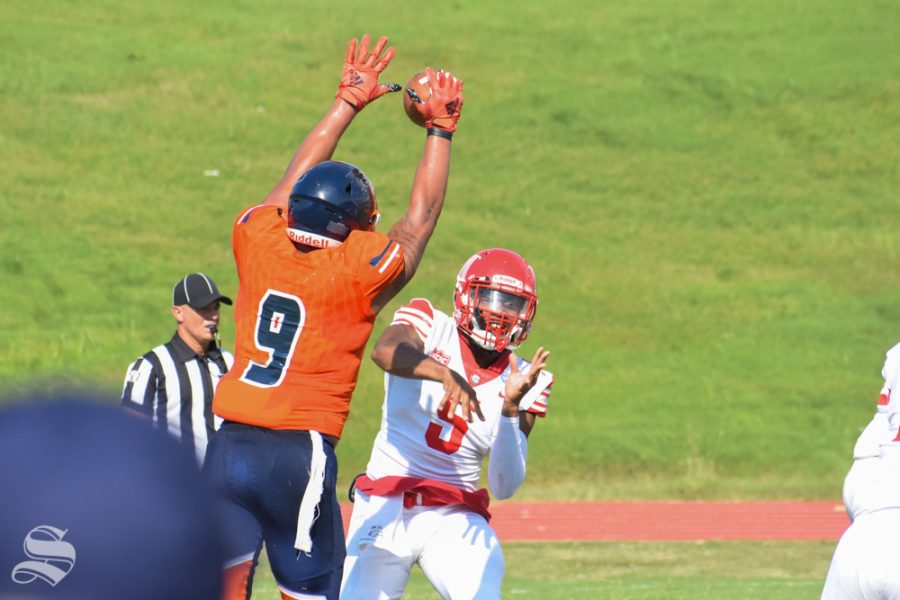 Ed Crouch, a senior quarterback for the McPherson Bulldogs, throws the ball to a teammate while senior linebacker, Christopher Pogi, jumps to block the ball mid-flight.

In one day, I managed to follow and watch more sporting events than I have in the last several years put together.

Over the weekend, I tasked myself with photographing a Wichita State cross country race and attending the Heartland American Classic football game between McPherson College and Langston University.

As my first sentence implies, I don’t watch sports much — if at all. If I were to get caught in a group conversation about the latest sports news, I would probably be the person messing with the label of a water bottle.

My family generally enjoys sports, but none more than soccer. I remember how excited my dad and younger brother would get over the FIFA World Cup. They would watch as many games as possible of the teams that interested them even slightly, discussing players and scores at length. I just liked watching the last game if anything It’s never been something that completely grasped my attention.

I never had much of a competitive spirit when it came to sports. To me, playing sports is hardly ever about deciding a winner or determining who’s the strongest or most skilled. It’s about enjoying the game with the people around you.

Not many people see it that way, so you see all this commentary and debate around sports as if the 2016 election was during the first Super Bowl. Some of the fans themselves put me off. I couldn’t understand how they could follow a sports team so strongly.

A Gallup poll published in 2018 shows that more than a third of American still see football as their favorite sport. I don’t think it can be written off how popular football is in this country, even though it’s been losing popularity over the years.

For the longest time, I could never understand. Coming from soccer, I thought the constant breaks in action were jarring and unnecessary. I want my sports to be an ongoing, exhausting, constant battle that pushes the players to their limits. I didn’t see that in football so much.

But while watching the Heartland American Classic in its entirety, my opinion started to shift. I cared not for either school, but I could still get hyped for a great pass or a gnarly tackle.

I found myself getting invested in the strategies of the teams, especially since it ended up being a close game with Langston beating McPherson by only one point. I had never seen a full football game before this weekend, but I’m glad I sat through this one.

At the cross country event, I saw the runners, their coaches, and their parents all cheering on their dedication and passion. Running four to six kilometers in one go probably seems impossible for most people, but they pulled it off with such determination that I was actually caught off guard by how quickly they finished.

Being a former long-distance runner myself, I know at least some of the great efforts that these athletes go to to break their personal records.

I garnered a lot of respect this weekend — not for the players so much, because I always had a lot of respect for those who constantly push themselves to their limits, but for those who watch sports, and even the sports themselves. There is definitely something that almost anyone can enjoy, whether it’s the drama, the action, or the half-time shows.

I would recommend everyone going to a live game when they have the chance. Home Shocker games are free for students, and while we may not always have the best teams, I believe we have teams that are always going to try. As long as we get that, we get to see the true meaning of sport.

I know, too, that these two events are only scratching the surface of sports events. There is a whole world of athletes, teams, tournaments, and world cups, with people from all backgrounds trying to get the number-one spot. I now have some more respect for them, and will be keeping an eye out for the next exciting match.