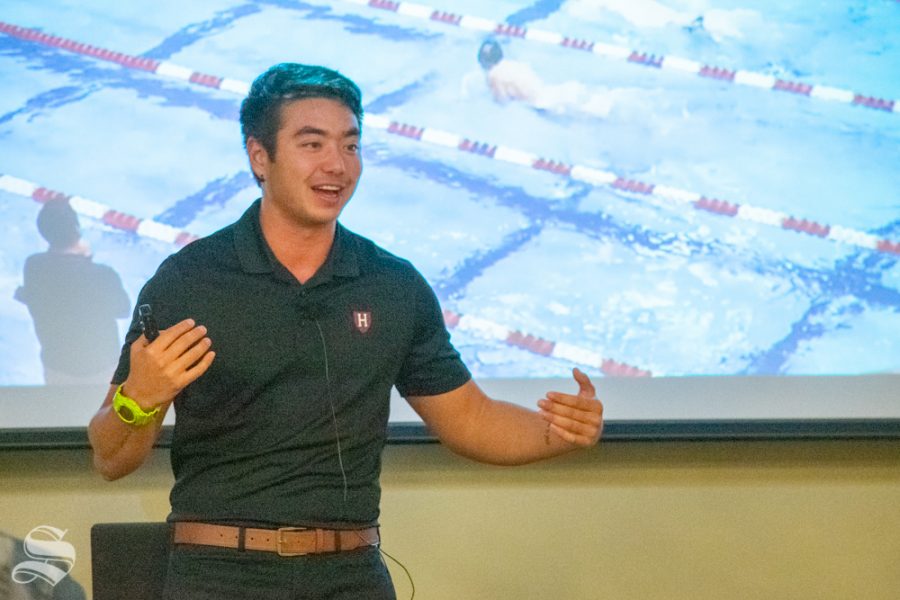 Schuyler Bailar speaks to audience members during his time visiting Wichita State. Bailar began the visit with a presentation about himself and his past, soon after he opened the floor to questions from the audience.

Bailar spoke about his life journey and LGBTQ and mental health issues.

He said that throughout middle school, he was bullied for showing masculine traits before he transitioned.

The summer before high school, Bailar made a vow to himself that he didn’t want to be bullied anymore and decided that he was going to present himself fully feminine, he said. He moved onto the women’s section and grew out his hair — anything to me more feminine.

The mood quickly became somber, however, when he highlighted the mental health struggles that he dealt with in high school. Despite achieving national records in swimming, having a high GPA, swimming offers from Ivy League schools, and a pretty decent social life, Bailar said he was miserable.

He thought that putting his focus on the pool and academics would make him feel better, but he ultimately ended up in a rehabilitation center to address his mental health before leaving for college.

It was there, Bailar said, that he realized he was transgender.

With this new revelation came decisions. He had a scholarship for the Harvard women’s swimming team — not the mens.

Fortunately, Harvard Women’s Swimming Coach Stephanie Wriede Morawski made sure that she kept in contact with Bailar throughout his gap year. Bailar eventually explained to Morawski that he was transgender.

Morawski struggled with what to do but while confiding in her friend, coach of the Harvard men’s swimming team, Kevin Tyrell. Tyrell presented an option — “Well, he could swim for me.”

Bailar originally declined the offer to swim on the men’s team. Worried about how to navigate the space within the locker room and around the pool, he decided that he would stick with the women’s team.

Morawski and Tyrell told him that the option to switch teams was still on the table.

Bailar didn’t make the decision to swim for the men’s team until after he visited Harvard and hung out with both the men’s and women’s teams.

After that weekend, Bailar found himself back in Morawski’s office, as she was the one supporting him throughout his journey. She eventually told him something that inspired him to make up his mind.

“In reality, you are standing at the edge of the cliff, and you actually have a safety harness on you,” Bailar remembered Morawski saying. “You just need to jump. You need to take that risk.”

After that conversation, Bailar went home and deliberated with his friends and family before emailing both coaches, stating that he is going to join the men’s team.

Bailar ended his speech on a powerful note: “Your identity doesn’t stop your dreams.