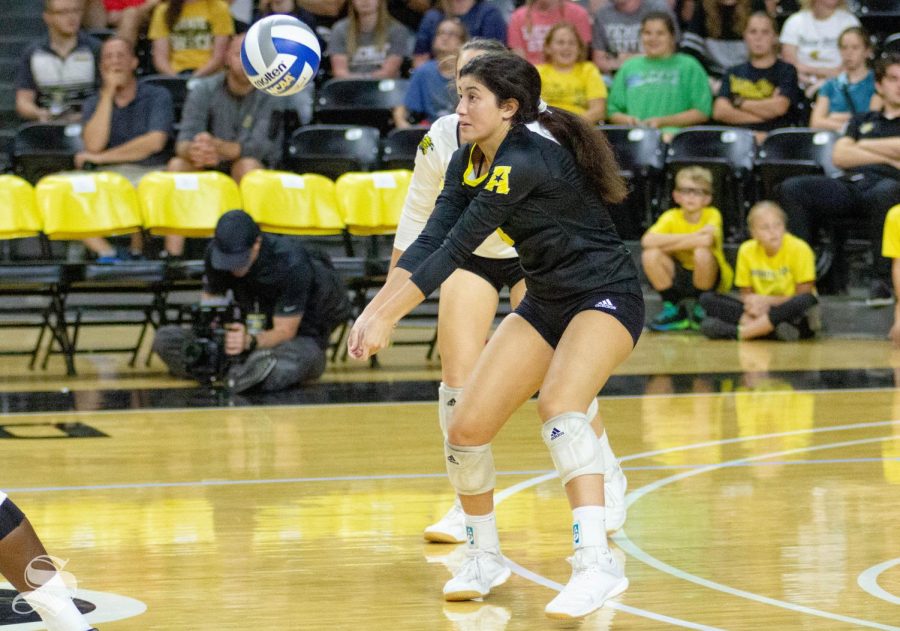 Wichita State hosted the Shocker Volleyball Classic over the weekend, welcoming No. 3 Texas, No. 13 Brigham Young, and Virginia Commonwealth.

After defeating BYU in the first set on Thursday, the Shockers wouldn’t win another set all weekend. WSU lost 3-1 to the Cougars, 3-0 to VCU on Friday, and 3-0 to Texas on Saturday.

After the match against the Rams on Friday, the frustration began to show. The players had “a lot” to say in the locker room, Head Coach Chris Lamb said. It was a match the team thought they could win, or at the least be competitive in.

Redshirt sophomore Megan Taflinger also discussed the team’s frustrations on the weekend after the VCU match.

“We need to understand that there should not be a lower point in the season than this,” Taflinger said. “But we also need to know what it’s like to feel this [disappointment].”

As a team, the Shockers were outhit 158-88 on the weekend, and hit just .119 in total. On the setting side of things, WSU was out-assisted 148-63, another clear issue Lamb made sure to address.

“The coaches are desperately seeking consistency in the lineup. We’ve been all over the map with being hot and not being hot,” Lamb said. “The setting carousel is getting really frustrating. We’ve yet to find anybody to really own it with three setters getting plenty of chances. That’ll be pretty difficult. The setting and libero position will be under the microscope all year.

“It won’t be just by us — every coach is going to recognise the limitations and are going to feed off of it, so we have to overcome it to get better.”

Dissapointments aside, Lamb may have found his setter of the future in freshman Kayce Litzau. Litzau blossomed against the Longhorns, recording 10 assists. Lamb said he was most impressed with her ability to turn bad passes into good sets.

“She was gritty,” Lamb said of the freshman. “I saw her on the run deliver some balls that were accurate. We’re just hoping to be accurate when we can stand under the ball, and I saw her make some accurate sets in some crazy situations.”

Another constant struggle for WSU over the weekend was hitting. Against BYU and VCU, the team recorded 18 hitting errors per match, and against Texas, the team tallied 14 more. WSU also tallied 16 total service errors through the three matches.

“Our hitters have to do better,” Lamb said. “You can’t always put it on the hitters though. Errors ultimately come from attackers, but I’m not saying that setters don’t make it more difficult at times, and that’s been an issue in the early part of the season.”

On defense, the Shockers allowed their opponents to hit .391 on the weekend. Ever since it was announced that All-Conference libero Giorgia Civita would miss the 2019 season, Lamb has been searching for a replacement.

This weekend, three players earned playing time as the team’s defensive specialist: Kara Bown, Arianna Arjomand, and Lily Liekweg. After the match Saturday against the Longhorns, Lamb addressed the situation with the liberos.

“I’ve been calling our group a bunch of pretenders when it comes to pursuit since last year,” Lamb said. “2018 was the last time I saw great defensive effort in our program. I need to see more urgency to defend. Our liberos are needing to give more.

“I’ve been logging each match, whether we won the setting, and libero battle and our record isn’t good.”

Even with it’s disappointments, Lamb said he hopes this weekend will serve as a learning experience moving forward.

“We needed to walk out of here feeling like we got better,” Lamb said after the tournament. “If you lose, so be it, but the real loss would be not learning something.”

Up next, WSU travels to Nebraska for the Creighton Classic that runs Thursday through Friday. On Saturday, the Shockers will also travel to Lincoln, Nebraska, to take on the No. 2 Cornhuskers.