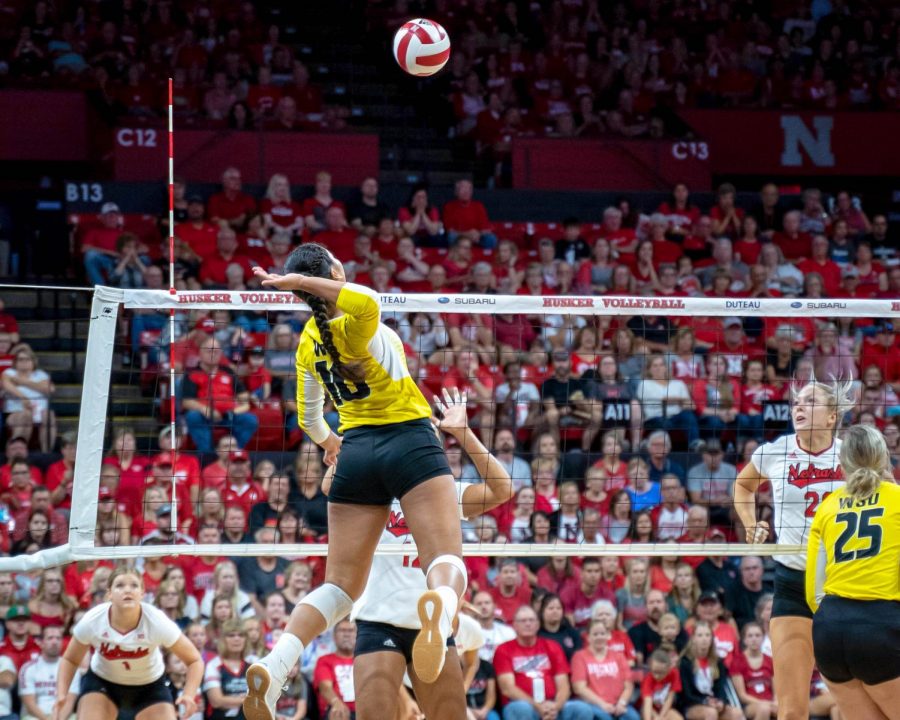 Wichita Sate freshman Sina Uluave goes up for a kill against No. 1 Nebraska on Saturday in Lincoln, Nebraska.

LINCOLN, Neb.– The Wichita State volleyball team ended their non-conference slate on Saturday with a loss to No. 1 Nebraska in straight sets, 3-0.

The loss against the Cornhuskers marked a season-long sixth straight loss. Previously in the weekend, WSU played in the Creighton Classic against the No. 15 Bluejays and Wyoming from Thursday-Friday, losing both matches.

In the first set against the Cornhuskers, the Shockers were able to keep the first close at 14-14 until a 6-0 run allowed Nebraska to pull away and win the set 25-17.

Nebraska took control of the second set early on in-route to a commanding 25-10 win. The Cornhuskers would win the final set 25-15. In the team’s last 20 sets of play, WSU has won just two sets total.

Freshman outside hitter Sina Uluave led the Shockers with seven kills on the afternoon. Brylee Kelly was right behind her with five kills of her own. Lincoln native Kara Bown started for WSU and received a standing ovation from the 8,000-plus who attended the game. She finished the night with nine digs and two assists.

As a team, the Shockers hit even for the match at .000. They were outhit by Nebraska 37-19. The Cornhuskers finished the match hitting .291.

Up next, WSU travels to Tulsa on Friday to start conference play.