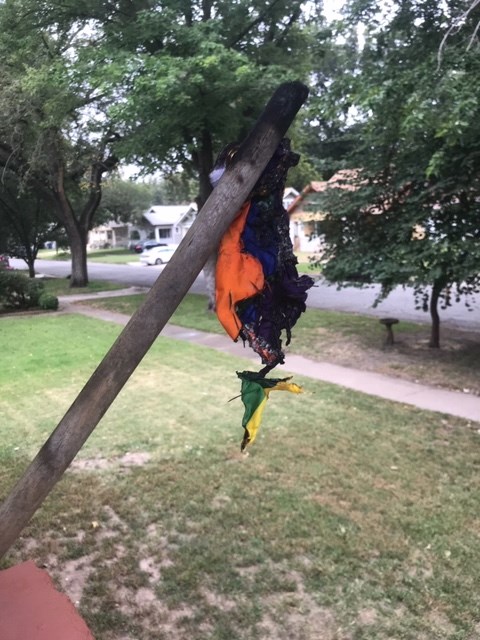 Zachary Gingrich-Gaylord woke up on Saturday to find that his family’s gay pride flag had been burned to a nub on the porch of their Riverside neighborhood home. The 3×5-foot flag, which was attached to their house by a flagpole, was completely burned, with the flagpole singed a mere six inches from the house.

Zachary has lived in Riverside for seven years with his wife, Micala, and their family. He said this was the first time his family has experienced an apparent hate crime, a crime motivated by prejudice on the basis of race, religion, sexual orientation, or other grounds.

Police responded within the hour. The Gingrich-Gaylord family filed a police report with an officer who stated it would be classified as an aggravated arson and hate crime. They were told that the neighborhood police would be posting flyers of the crime around the neighborhood.  Additionally, the police force’s LGBT liaison sergeant, Vanessa Rusco, has been contacted and is aware of the situation.

The offense, committed some time between midnight and 7 a.m. Saturday morning, has left the family rattled.

“It’s a scary thing,” Micala said. “My husband thinks they wrapped the flag around the pole before they set it on fire.” That would indicate that time and care went into the act.

But this wasn’t the first time someone messed with the family’s flag.

Two weeks ago, the family noticed their flag had been stolen. A few days later, a neighbor returned it, saying she had found it in her yard. They put it back up.

They also ordered two more flags and gave them to neighbors on the 1100 block of Coolidge Street. In the wake of this offense, several more rainbow flags popped up on the block, in a show of solidarity.

“I felt this real good energy about seeing all the flags go up in the neighborhood,” Micala said.

She said that show of solidarity is likely what inspired the crime.

“What I think happened was, they saw all these flags put up in unison, and then decided to set ours on fire,” Micala said.

The news has already swept across the Riverside Facebook page, with the majority of commenters showing their support for the Gingrich-Gaylords.

“So many people on the Facebook page have been saying, ‘I”m going to put [a gay pride flag] up,” Micala said.

As of Saturday, there were only a few less than supportive responses on Facebook. “Why can’t you keep this to yourself?” one stated. But, as Micala noted, that commenter “got shot down pretty quick” by others.

The crime, although terrifying, has only motivated the family to continue standing up for their beliefs, they said. When asked if they would replace the flag, Micala and Zachary were both quick to answer in the affirmative.

“Oh yeah. I ordered four more right after, and then Micala ordered four more,” Zachary said. “Well, what are you gonna do? Not get more flags? I mean, it’s scary, but it’s also important to stand up to fascism.”

“[Give them] too many flags to burn,” Micala added.

She said she fully expects the flags to be burned again.

“Unfortunately, this will go on and on,” she said. “But this puts this neighborhood in a unique position to take a stance.

“I think there’s a lot of fear. Some people are fascists, and this is how they keep things a certain way, so they don’t have to deal with things that make people afraid.”

Police are asking anyone with information about the crime to call Crime Stoppers at 316-267-2111.