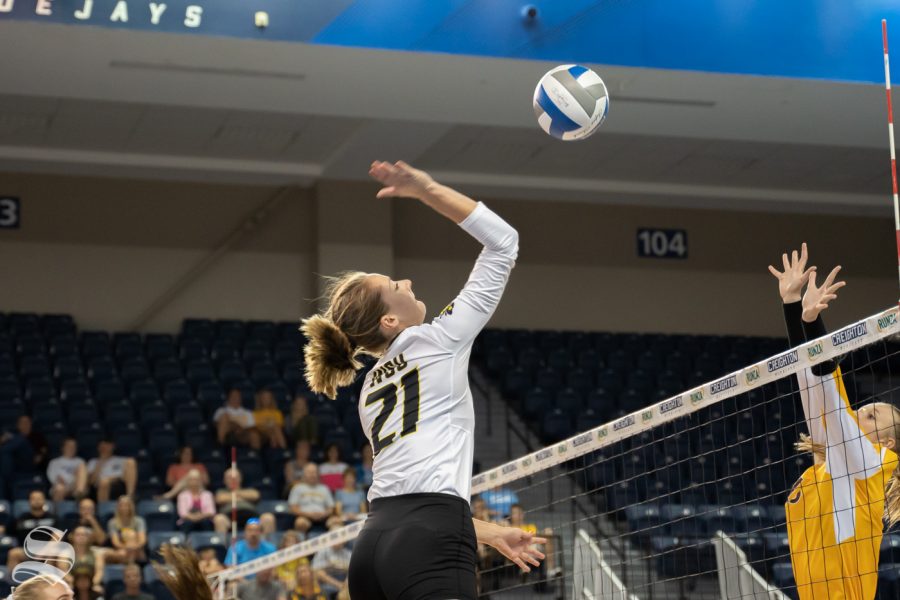 Wichita State redshirt sophomore Megan Taflinger goes up for a kill during the game against Wyoming on September 20, 2019 at D.J. Soko arena.

Megan Taflinger tries to keep the frustrations out of her head.

For the past three weeks, Taflinger and the Shockers have faced one of the nation’s toughest volleyball schedules, including matchups with three top-five ranked teams and five total ranked teams. Last Saturday, the team even had to take on the No. 1 Nebraska Cornhuskers.

Taflinger acknowledged the difficulty in going up against these teams’ caliber and size. She admitted it can be frustrating because they’re bigger, faster, and stronger. It’s not easy to lose six matches in a row.

“For me personally, it is hard for me to lose that many games in a row and still be okay with yourself,” Taflinger said. “It’s difficult because I am giving it my all and still failing. It’s a challenge for me mentally and physically.

“For the team though, I really hope we stick together and pull it out and understand that who we were playing were really elite teams. The mentality was that if it was a win, then great, but if we lost, then we learned from it.”

The redshirt sophomore said she’s focused on learning from the adversity rather than just dwelling on the losses. She’s had to learn to be “okay” with getting blocked while on the offensive side of the ball sometimes, she said.

“The biggest thing that I learned from those matches was that there was some really giant blocks out there,” Taflinger said. “It’s the hardest thing to be a little undersized and have to go up against girls who are really physical and really talented.

“I learned to be okay with going up and just trying my best, and if I get stuffed, then that’s what it’s going to be.”

As for the team’s learning experiences, she said she hopes they’ve learned how to compete.

“I hope we learned that competing is a virtue — if you can’t compete, then why are you playing the sport?” Taflinger said.

The Shockers knew going into non-conference play that they might emerge with a sub-.500 record. But Taflinger said the team had realistic expectations, and she hopes that helps them in the long run.

Taflinger said the players in the locker room understand that the conference season to come is most important, and that the learning experiences from the past could still help propel the team to the NCAA Tournament.

“We are still competing,” Taflinger said. “If we do well in non-con, and the conference tournament, then we still have a chance at making the NCAA Tournament.”

Another item the Shockers have been struggling with so far this season is putting a consistent lineup on the court. Senior libero Kara Bown made her return to the lineup last weekend in Nebraska after being benched in the Shockers’ home tournament the weekend before. The setter position is still getting reps from three different players — Kora Kauling, Kayce Litzau, and McKayla Wuensch.

But Taflinger sees a positive out of the interchanging lineups, and even credits the underclassmen for making the team better in the longrun.

“As an older person, watching a younger person from the bench makes the team better in general,” Taflinger said. “If your younger players are pushing your older players to play better, then we are going to receive that challenge and work harder to be out there.

The Shockers open up conference play on Friday when they travel to Tulsa. One thing Taflinger said the team can leverage is their youth.

“It’ll be interesting to see how they adjust to our younger players and attackers,” Taflinger said. “They haven’t seen a lot of us play — just Emma (Wright) and I.

“We just have to do what we do — compete hard and see if we can pull a win out of it.”