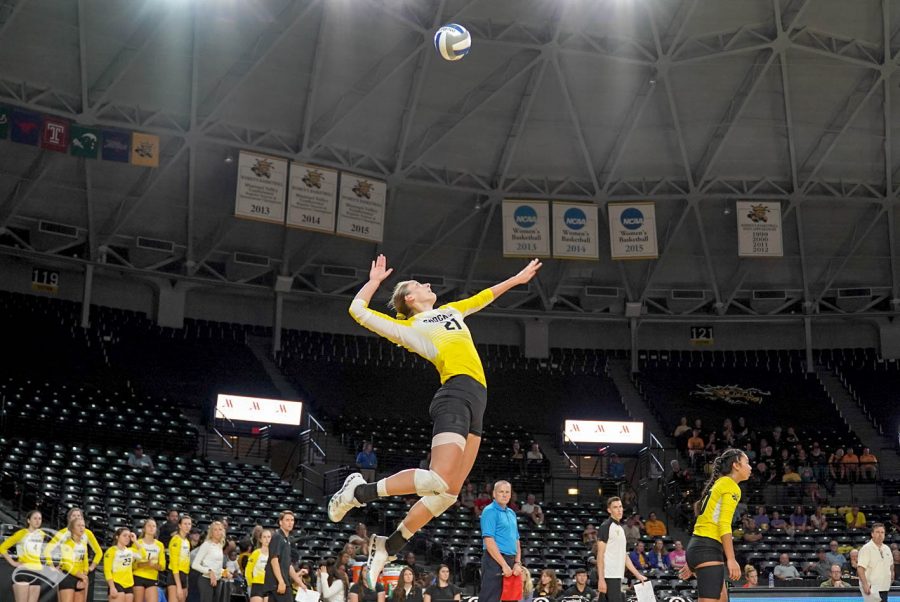 Wichita State sophomore Megan Taflinger goes up for a serve during the Shockers' match against Cincinnati on Sunday inside Charles Koch Arena.

Wichita State continued their ongoing struggles on Sunday, losing to conference foe Cincinnati in three sets 25-17, 25-12, 25-22. The match marked the eighth-consecutive loss dating back to the first week of September.

The Shockers were able to keep the first set close until a late run clinched the set for the Bearcats. After hitting .400 through the first 20 points of the set, the offensive consistency dipped, and WSU finished the set hitting .185.

After jumping out to a 4-2 lead in the second set, the Shockers found themselves in a deep hole late. The Bearcats would run away with it, winning the second 25-12. At the break, the Shockers were hitting just .129 compared to Cincinnati’s .421 hitting percentage.

As a team, the Shockers continued their struggles on offense and hit just .204 for the match compared to Cincinnati’s .396 hitting percentage. Wichita State also recorded 13 attacking errors. Individually, sophomore Megan Taflinger led the team with 10 kills on the afternoon. Emma Wright finished behind her with five kills of her own. McKayla Wuensch led the team with nine digs.

For Cincinnati, Jordan Thompson recorded a match-high 18 kills on .429 hitting.

Up next, the Shockers travel to Memphis on Friday to take on the Tigers. The match is scheduled to start at 7 p.m.