Here are some of September’s eye-catching crime log entries 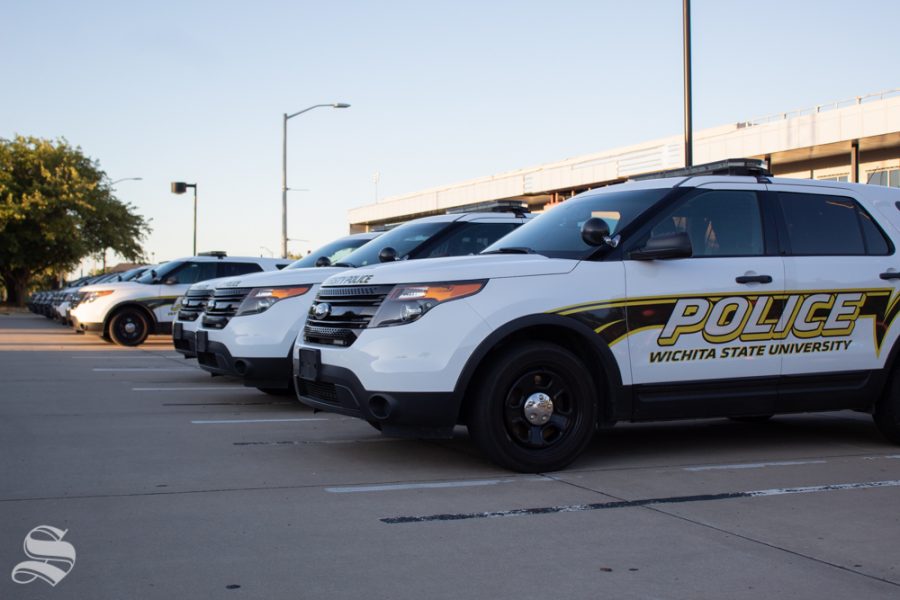 A line of Wichita State University Police Department patrol cars line department's parking lot off Perimeter Road. Chief Clark recently sat down for an interview with The Sunflower to explain some of the department's structure.

At 9:44 p.m. Sept. 1, officers report two juvenile males were seen checking door handles of parked vehicles and inside a vehicle at The Suites’ parking lot.

The property was recovered and returned to the owners, and the juveniles were released to a grandparent. The case is listed as an auto burglary and marked as under investigation.

At 10:49 a.m. Sept 2., officers received a report from a driver who believed a person they know painted their fender with red nail polish in lot No. 7 the day before. The entry says the driver refused to reveal the person they believed vandalized the car.

At 7:13 p.m. Sept. 3, the department received a report that an unknown person cut a bicycle lock and stole the bike from a rack outside Shocker Hall the day before.

In most cases, thieves cut bicycle locks before taking the bikes.

At 7:10 p.m. Sept. 9, an anonymous caller reported seeing three males searching through a vehicle and running away when a vehicle alarm sounded. The entry says the owner determined nothing was missing from the vehicle.

At 5:20 p.m. Sept. 10, officers responded to a report of two males checking vehicle doors in a parking lot near Sigma Phi Epsilon. No vehicles were entered and the males had left the area by the time officers arrived.

At 7:03 p.m. Sept. 17, officers received a report of an unknown person or persons entering a vehicle and going through the interior. Nothing was reported missing.

At 8:52 p.m. Sept. 19, WSU police officers checked on a female lying in the grass. The entry says she became combative, hit officers and threw items at firefighters. The crime log says the 53-year-old female was arrested and booked into jail for battery of a law enforcement officer.

At 11:07 p.m. Sept. 20, officers reported a male fell from his longboard and injured his ankle while riding on Perimeter Road near the Heskett Center. EMS transported the male to the hospital.

At 7:53 a.m. Sept. 24, officers received a report of a male sitting inside a vehicle in the morning near 17th and Harvard, making people feel uncomfortable. After contacting the driver, officers determined he was a student who arrives early and studies before class.

At 1:46 p.m. Sept. 24, officers received a report of a male “sagging his pants, wearing a thong and exposing his buttocks” at the Rhatigan Student Center. Officers checked the area and were unable to locate the male. At 11:29 a.m. Sept. 26, a 26-year-old male with a no-trespass order for WSU was arrested and booked into jail near the Human Resources Center.