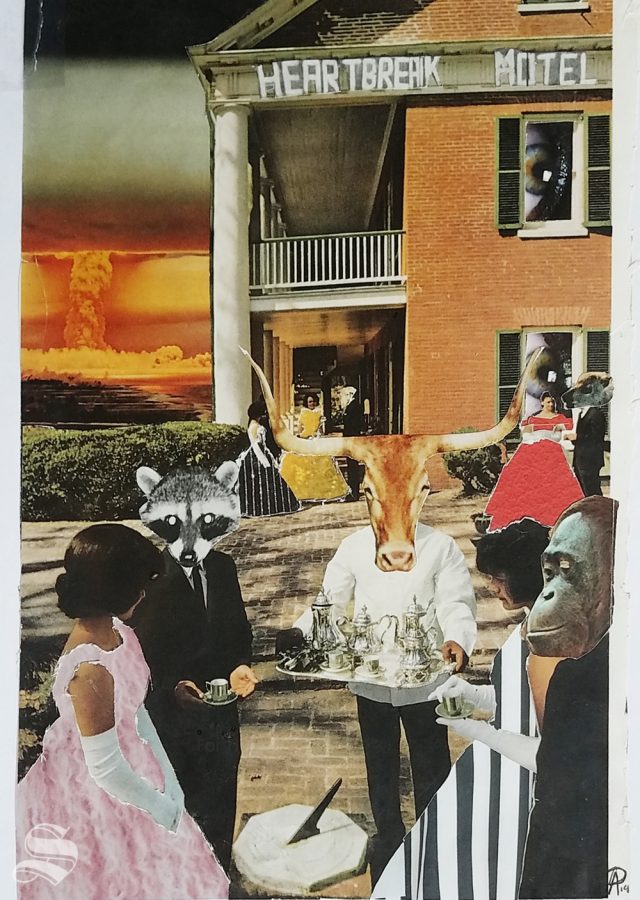 Alexa Peters is describing her search for the right animal heads.

“I was trying to find animal heads that were all the same size. It would be so easy to Google a picture, but I feel like that’d be cheating.”

Twenty-six-year-old Peters, a Wichita native, creates collages painstakingly assembled from old magazines, many of which she finds at Paramount Antique Mall. Her technique is to find a central image that interests her, then peruse more source material for background clips.

“I like the older magazines like “Life” and “National Geographic”(from the 1960s) because the print on them is different, so if I put them next to something modern, it really pops,” Peters said. “A lot of the advertisements are so unusual.”

Since the creation of her art is somewhat dependent on found images, sometimes the process can feel limiting, she said.

“It can be pretty time consuming. If I get a certain picture in my head, I need a certain size or a certain item,” Peters said. “So, I’m looking through magazines looking for that specific image. ‘Vaccinate Your Monster’ took one month to make.”

And Peters’s careful eye to detail has paid off.

In “Post-Apocalyptic Ball,” three figures with animal heads are talking to women in formal gowns. The animal heads are of a raccoon, a bull, and a gorilla. The scene, though clearly depicting a soiree, features an old building in the background with a hand-painted sign that reads, “Heartbreak Motel.” Beyond that is an atomic orange mushroom cloud, which rises eerily into the shade of a Kansas sky before a storm.

The more you look at the piece, the more details are revealed. The experience is a bit like looking at “Magic Eye” posters that were popular in the 90s.

“I like to make things that are kind of weird,” Peters said.

Another work of hers, “If You Don’t Vaccinate Your Monster,” features King Kong and a woman in a skimpy dress (perhaps the fictional character of Ann Darrow) in a torrid embrace. A giant hand appears from the right-hand corner of the frame, poised with a needle above King Kong. Behind them are tanned, leisurely swimmers on a lake. And on a cliff behind them is a giant clock, with its hands at 2 p.m.

Peters’s art is a juxtaposition of ideas that feels fresh and invigorating. Your mind can’t help but try to make sense of these strange new worlds. And while her paste-ups incite discomfort, they also provide an absurdist humor.

A relative newcomer to the art scene, Peters says she’s been making collages for about three years.  Her first show was about a year ago, at Third Place Brewing, for a Final Friday. She describes the atmosphere of the local event as “very social.” It was also profitable.

“I sold, like, three or four pieces,” she added.

But Peters’s motivation for making art is personal.

“It’s therapeutic for me,” she said “I get in the zone when I do it. I put on some music and it’s nice to just focus on this one thing for a little bit.”

“I would hope there would still be crowds and people who want to support local artists,” she said.

Peters’s art reception is this Friday at the Vagabond (614 W. Douglas). Her work will be on display through Oct. 26.

More of Peters’s work can be found at on her Facebook page.