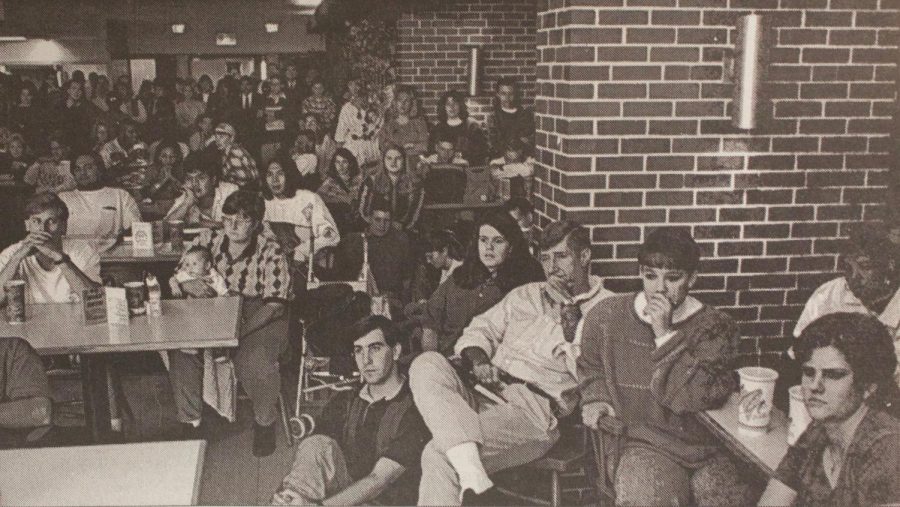 The refrain that people all over the United States were either hoping for or dreading.

O.J. Simpson, after a nine-month trial, was found not guilty on all counts of murder in the death of Nicole Brown Simpson and Ron Goldman.

Wichita State, though thousands of miles from Judge Lance Ito’s Los Angeles courtroom, came to a silent, tension-filled halt as the verdict was read Tuesday.

In Duffy’s, there were students standing on chairs to see over the people who were standing on the floor in front of the television. A low rumble came from faces that were all looking at the television. As everyone waited, the collective heartbeat of the room could be felt.

“Just read the verdict,” one excited student whispered. Everyone else felt the same way, but many scornful eyes asked her how she could speak when The Trial was about to end.

In Elliott Hall, classes were dismissed early to allow students (and faculty) to catch the noon pronouncement. Room 111 was filled with about 40 tense and pensively quiet people, all intently staring at the big screen TV.

There was a single television camera from a local station with bright hot lights illuminating the room. But no one in attendance paid the cameraman much attention as he panned across the room, trying to capture the tension of the moment. Everyone was staring fixedly at Judge Ito on the screen, listening to the perfunctory preamble before the verdict was read.

“Not guilty of the crime of murder … a felony upon Ronald Godman.”

An audible gasp, like air rushing out of a punctured tire, escaped from the crowd. A few people, those who thought — who knew — O.J. was innocent and the trial a hideous farce, were visibly elated.

Others, obviously from the guilty camp, were just as passively vociferous.

“What?” they demanded, laughing incredulously, “This whole trial’s been a joke.”

Back at Duffy’s, an overwhelming sigh bounced off the walls after the verdict was read. After a few seconds, about a third of the crowd clapped, but a few were crying and some even shouted obscenities.

But it was a heavy humor that caused a few people to laugh.

Grae Johnson, senior in communication, shook his head slowly and paused for a moment before speaking. He smiled a brief, sarcastic smile.

“I’m stunned,” he said. “After such short deliberation, I thought it would be a guilty verdict. I thought he was guilty, but …”

But was justice served?

James Jenkins, who was sitting in front of Johnson, also was shocked by the verdict.

“I was expecting a conviction of second degree murder,” he said. ‘The time (the jury) took was the convincing factor for me that they had found him guilty.”

“One way or the other,” he said. “There’s still a murderer walking free.”