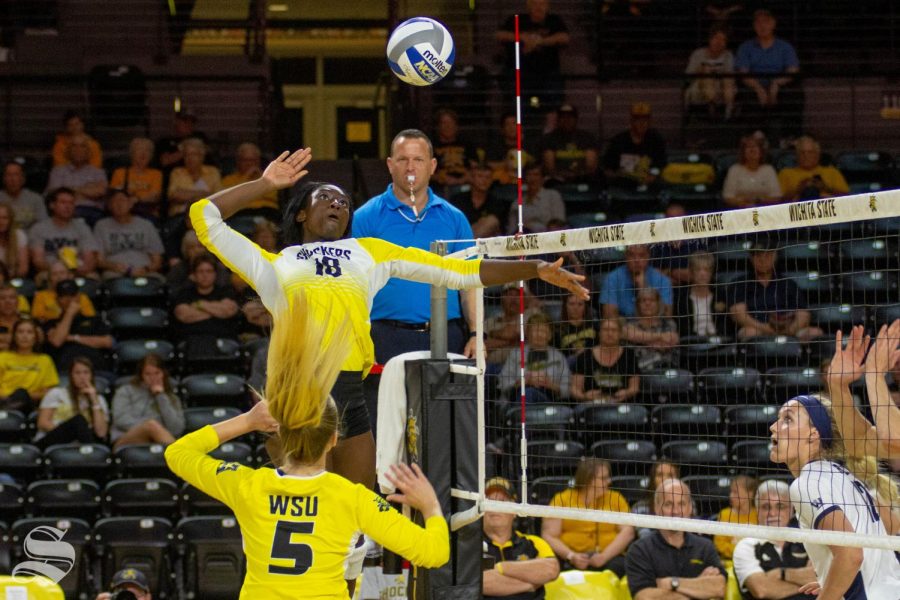 Wichita State redshirt freshman Chinelo Ogogor goes up for a kill against BYU.

Wichita State volleyball carries their eight match losing streak into a pair of matchups on the road against Memphis and Southern Methodist this weekend.

The Shockers will first take on the Tigers on Friday at 7 p.m. The game against the Mustangs will take place on Sunday in Dallas.

The Tigers come into Friday’s match with an 11-3 overall record, but are 0-2, just like the Shockers, to start conference play. So far during American Athletic Conference play, Memphis has fallen to Tulane, 3-2, and Houston, 3-2.

Through 14 matches, the Tigers are led by junior outside hitter Hannah Flowers who has tallied 170 kills this season on .343 attacking. She also has 33 service aces, 32 digs, and 24 total blocks. Sophomore setter Sabrina Blanco has a team-high 567 assists while libero Kaitlyn Gehler leads the Tigers with 203 digs.

Before the season, Memphis was selected to finish 12th in the AAC poll, below Wichita State. In the one match between the two teams last season, the Shockers sweep Memphis in straight sets. WSU was led by now-sophomore Megan Taflinger who recorded a team-high 16 kills in the match.

The Mustangs head into the weekend matchup with a 7-5 overall record, but also have started conference play with an 0-2 record after losing to Houston, 3-2, and Tulane, 3-2.

Through the team’s 12 matches, the Mustangs are being led by outside hitter Hannah Jacobs who has tallied a team-high 148 kills while hitting .228. She’s averaging 3.79 kills per set. Sophomore Lily Heim has recorded 485 assists this season, and libero Montana Watts has a team-high 199 digs. Heim currently ranks eighth in the nation in assists per set.

Before the season, SMU was picked to finish fifth in the AAC, two spots ahead of Wichita State. Last season, the Shockers went 0-2 against the Mustangs, falling in five sets and then being swept in their final meeting.