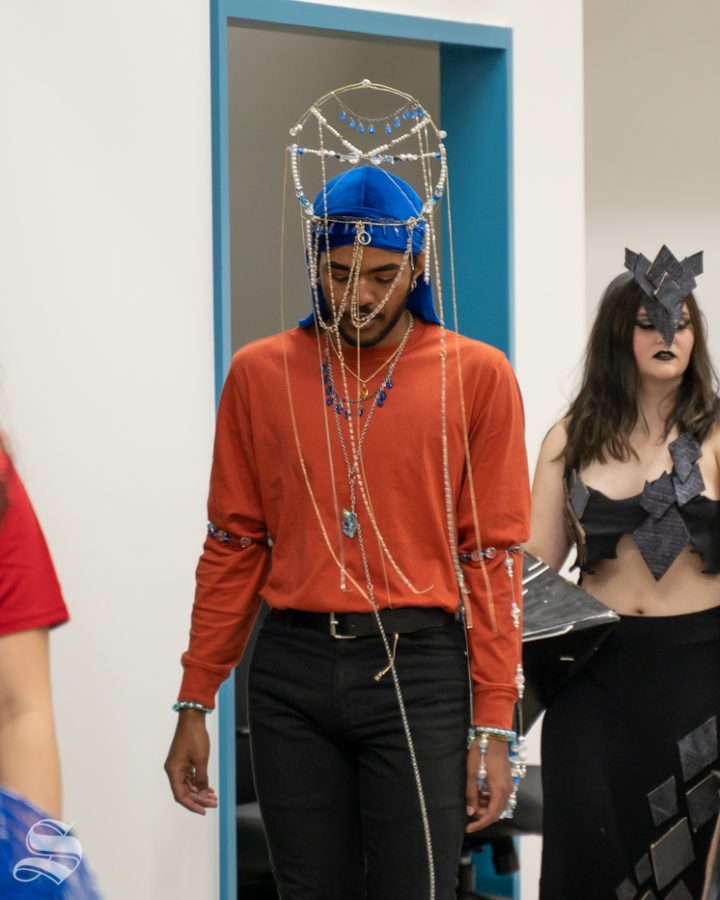 ShiftSpace, Wichita State University’s student-run art gallery, celebrated its grand reopening on First Friday to a warm reception. The evening was a visual feast, featuring dance, design, and photography. The gallery, previously housed in the Commerce Arts District, is now stretching its legs in a much larger space at Groover Labs in Wichita’s Old Town District.

3D Design students paraded their attire in front of the seated crowd. Instructor Hallie Linnebur said her students were dressed in “wearable art” of their own creation. The theme for their costumes was “interpretations of protection.” Linnebur went on to describe the costumes as “sculpture in motion.”

Her 30 students exhibited a wide range of interpretations, some wearing spiked clothing, chains, or body armor made of various materials. One student shuffled with cardboard boxes on her feet. Another wore small balloons that were painted to look like googly eyes. Yet another was a colorful squid.

Linnebur wore a costume designed by a student, Zane Wheeler, who wasn’t able to attend. His ‘wearable art’ was a crab warrior, complete with one long red claw.

“I’m always trying to get students out in the community,” Linnebur said, commenting on how pleased she was with their work.

“I had a vision of a bug with a protective shell,” she said.

It took her three weeks to create the elaborate costume.

Additionally, ShiftSpace unveiled a photo exhibit by WSU Guild Members titled, “This Must Be the Place…” featuring work by photographers Hugo Zelada-Romero and Tim Fey.

The series addresses the Groover Lab before WSU moved into the building. Some photos depict the deconstruction, while others show the space as it previously appeared, when Printing, Inc. was housed there.

Fey and Zelada-Romero, vice president of ShiftSpace, are both studio majors with concentrations in photo media.

“[Groover Lab] asked us to document the place,” Zelada-Romero said, “Our approach was in the Minimalist style.”

The prints offer a straightforward interpretation of the building’s structural elements. Zelada-Romero added that he was inspired by the photographer Ed Ruscha, who is known for his deadpan depictions of objects typically not thought of as aesthetically pleasing.

Acknowledging the mood of the evening, Zelada-Romero remarked on the dynamic future of arts.

“You can’t be an artist in 2019 and not be interdisciplinary,” Zelada-Romero said.

ShiftSpace’s new space promises to allow for more student involvement in all phases of gallery life. Under the tutelage of Gallery Manager Kristin Beal, it appears the students will now have more room for accomplishing the program’s goals, including gaining experience in curating exhibitions and coordinating community outreach.

ShiftSpace’s physical move is accompanied by a rebranding effort, including a new logo, new font, and a gold and black color scheme that nods to the university’s official colors. This new visual identity was developed by Nicklaus Lawrence, a graphic design student and ShiftSpace Student Group member.

The next event at ShiftSpace will be for First Friday on Nov. 1. The gallery is located at Groover Labs, 344 N. St. Francis Street. The event is free.