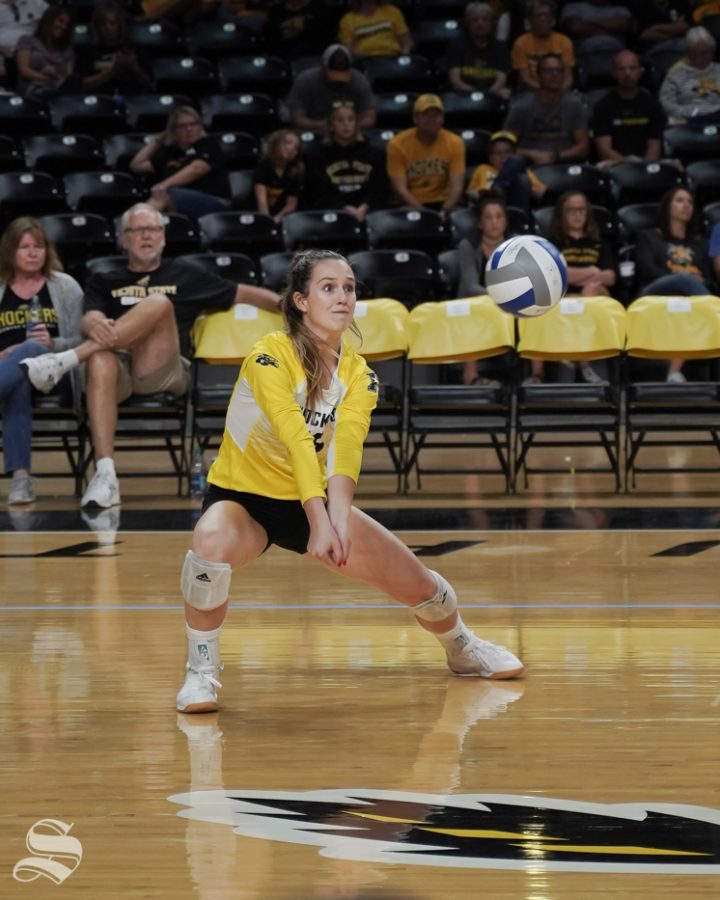 Wichita State senior Kara Bown digs the ball during the game against Cincinnati on September 29, 2019 at Koch Arena.

The Wichita State volleyball team split their matches during this weekend’s road trip to Memphis and Dallas.

On Friday, the Shockers traveled to Memphis (11-3) and defeated the Tigers in five sets, 3-2. As a team, WSU outhit Memphis 61-58. They also tallied 16 blocks on the defensive side of the net.

In the decisive fifth set, the Shockers hit a high .429 hitting percentage, which propelled the team to its first victory since Sept. 7.

Individually, senior Emma Wright led the Shockers with 16 kills on .538 hitting. She also recorded six blocks. Finishing right behind Wright was red-shirt sophomore Megan Taflinger with 15 kills and red-shirt freshman Brylee Kelly, who recorded 14 of her own.

After snapping their losing streak on Friday, the team tried to keep their momentum flowing with a match against Southern Methodist on Sunday. The Shockers were swept by the Mustangs in straight sets, 3-0.

The Mustangs outhit the Shockers 48-34 and held Chris Lamb’s team to a low .167 hitting percentage.

Individually, WSU was led by Kelly, who recorded a team-high 13 kills. She was the lone Shocker who tallied kills in the double-digits.

The team returns to action against Houston on Oct. 11 inside Charles Koch Arena. The match is scheduled to start at 7 p.m.