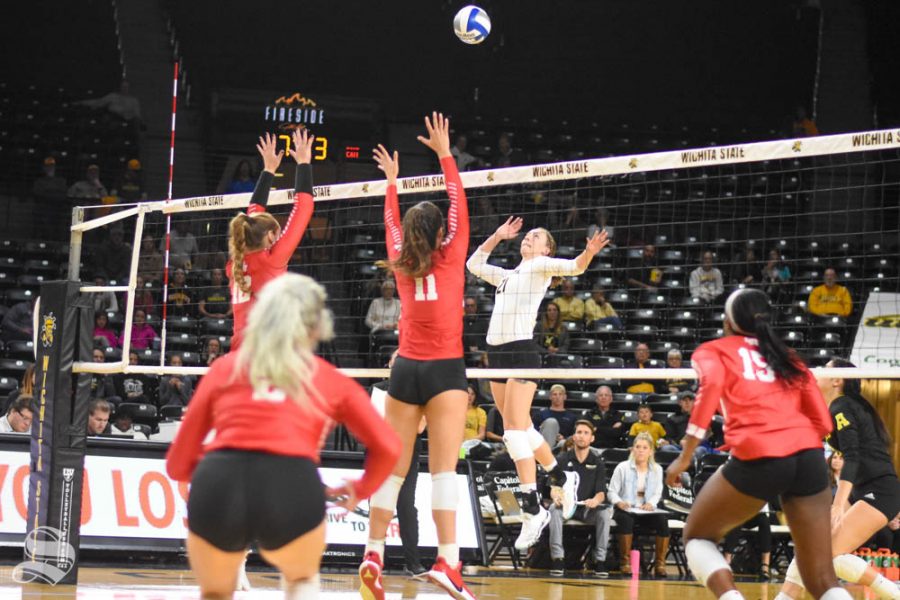 Wichita State redshirt sophomore Megan Taflinger goes up for a kill against Houston on Friday inside Charles Koch Arena.

Everything was clicking for the Shockers in the first set of their match against Houston on Friday. Redshirt sophomore Megan Taflinger came out firing with nine first set kills on 1o total attempts. A trio of Sina Uluave, Brylee Kelly, and Chinelo Ogogor combined for eight kills, while the team’s hitting percentage was a respectable .227.

The first set win was a long time coming too, as it marked the first set the team has won inside Charles Koch Arena since Sept. 12, the first set of the Shocker Volleyball Classic.

But then the team ran into a wall.

Outside of the first set, the Shockers continued their season long struggles on the offensive side of the net. As a team, Wichita State hit .133 as a team and committed a total of 29 attacking errors, compared to Houston’s .227 hitting and just 14 errors. Taflinger would be the only Shocker to hit over .200 individually on the night.

Taflinger would finish the night with 20 kills on .275 hitting. Junior setter McKayla Wuensch finished with a double-double, tallying 30 assists and 12 digs.

Individually, the Cougars were led by Abbie Jackson who tallied 16 kills.

Up next, the Shockers will look to rebound against Tulane on Sunday back inside Koch Arena. The match is scheduled to start at 1 p.m.