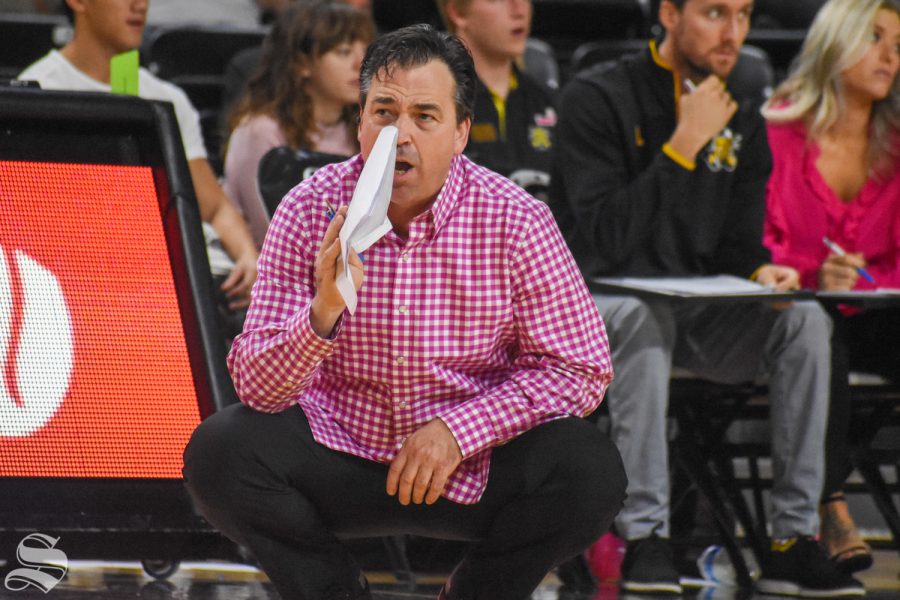 Head Coach Chris Lamb yells out instructions to team members during the last set of the game against the USF Bulls on Oct. 20.

The Shockers dominated play in the first set as they defeated the Bulls by a score of 25-10. In that set, redshirt sophomore Megan Taflinger, who finished the game with a game-high 17 kills, had six of the team’s 17 kills.

They continued that momentum into set number two and three, winning by scores of 25-19 and 25-23. It marked first win since Oct. 4 when they traveled to Memphis.

For the match, the Shockers hit .363 along 41 kills. Individually, senior Damadj Johnson tallied nine kills and freshman Sophia Rohling also added in six of her own.

Freshman Arianna Arjomand lead the team with 14 digs and freshman Kayce Litzau led the with 16 assists.

Next up, the Shockers will embark on a four-game road trip which will start on Oct. 25 as they travel to Storrs, Connecticut to play UConn. This will be the last time the Shockers will matchup against UConn in conference play as earlier this year the Huskies announced they will leave for the Big East starting next season.