Closed search winds down: Regents search for a president who will ‘fully implement’ Bardo’s vision 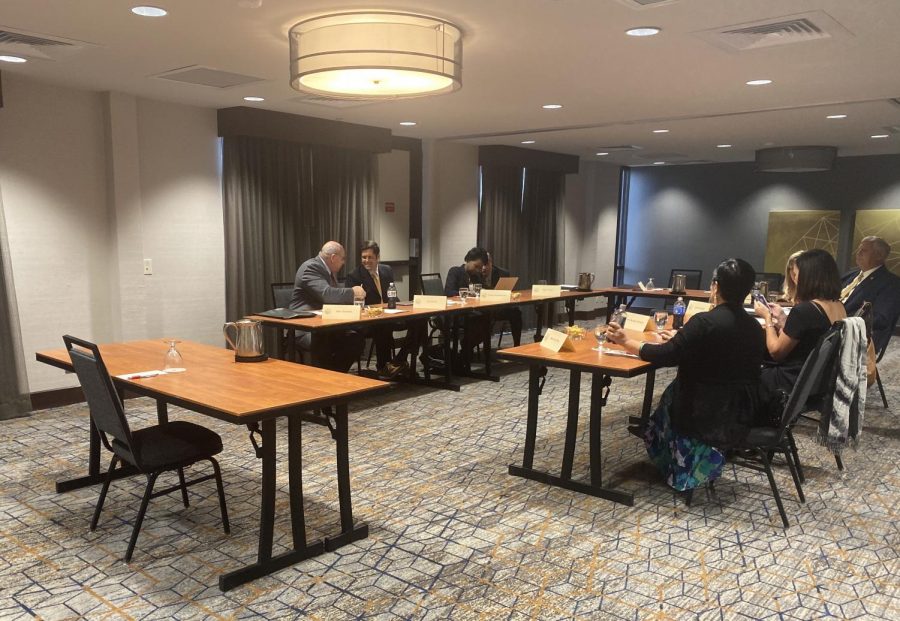 Members of the Kansas Board of Regents congregate before they interview finalists for the next Wichita State president. The interviews are being held at a Marriott Hotel at the Kansas City Airport.

After a months-long closed search, Wichita State University is likely within a week of meeting its 14th president.

Finalist interviews are being conducted by the Kansas Board of Regents Sunday and Monday at the Marriott Hotel at the Kansas City Airport in Missouri.

Since the search is closed, finalists’ names will not be released. Less than five minutes into Sunday’s meeting, the board went into executive session and Sunflower reporters were asked to leave the room.

Before the meeting, board chair Shane Bangerter told The Sunflower that the Regents, a nine-person board of political appointees that oversees state institutions, are searching for a president who will keep WSU on the path that late President John Bardo charted for the university.

“Obviously, someone who can take the programs that Wichita State, the innovative things that you’ve done there in regards to Innovation Campus and connection with industry, internships — those kinds of things that are so exciting to WSU — and really fully implement them,” Bangerter said.

“Fully implement that vision that Dr. Bardo had to really help grow the Wichita economy and the state economy and provide the labor that we need.”

In August, Interim President Andy Tompkins, a lifelong educator and retired Regents president, told The Sunflower that WSU’s next president should be someone who knows how to navigate the university system.

“I think they need to have an understanding of the higher education system,” Tompkins said. “At the end of the day, this is about the students. That’s why you exist is to help students.”

All of Wichita State’s past 13 presidents have been white men. Asked to comment on the diversity of finalists, Bangerter was evasive. He hinted that the Regents, who have the ultimate say in naming the next president, were not familiar with finalists going into interviews.

“The search has really been closed to us as well,” Bangerter said. “Obviously, those who were serving on the search committee would be better to answer that question at this point.”

“The competition for the position was intense,” Clark said in an email to The Sunflower last week.

After Bardo’s death in March, Regents approved WSU’s presidential profile in June. Bangerter said he trusts that the committee considered a broad cast of candidates.

“We assume that they followed the charges that we gave them, and I’ve heard that they have some really strong candidates,” Bangerter said.

Bangerter and Clark would not confirm how many finalists were selected or if any are currently employed at WSU. Last week, a source told The Sunflower that the board was considering five finalists.

Bangerter said WSU’s next top executive could be named by the end of the week.

“Typically, once you start the interview process, it’s a matter of days, not weeks,” Bangerter said. “This has never happened, but it is possible that we wouldn’t find a candidate that we thought was a good fit, in which case, that would extend it by months.”

Before reporters were asked to leave, Bangerter broke down the interview process for his fellow Regents.

‘There’s prepared questions. I’ll ask the first one and then we’ll work around the room,” he said.

“As we go through the questions, if you have other questions, that pop up, I don’t see a problem with having a dialogue with the candidate. The idea would be to try to get to know the candidate as best we can.”