REVIEW: ‘I Am Human’ asks what it means to be human 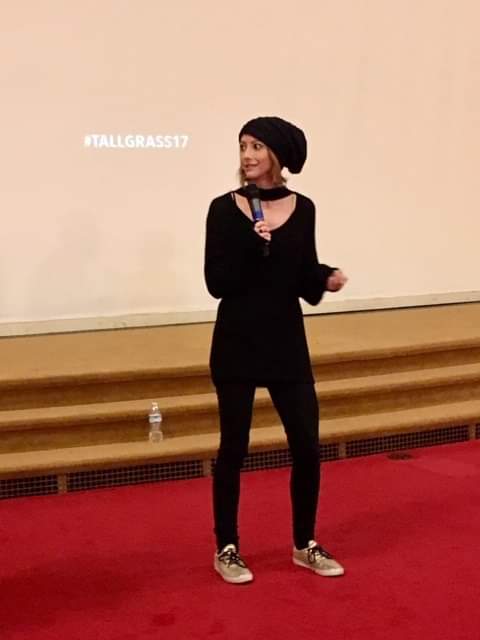 Taryn Southern, Co-Director and Producer of "I Am Human," answers audience questions at the Tallgrass Film Festival premiere.

“Are we about to change what it means to be human? If so, are we okay with that?”

So begins “I Am Human,” an unsettling and fascinating film about brain implant technology and the future implications of artificial intelligence. An independent film that premiered earlier this year at the Tribeca Film Festival, “I Am Human” is the directorial debut by Taryn Southern and Elena Gaby, produced by Southern.

The film follows three recipients of invasive brain technology on their journeys in becoming pioneers for experimental and expensive bio-technology implants in the hopes of alleviating their physical disabilities. Bill, Steven, and Anne have very different stories of how and why they would benefit from direct brain interfaces. Bill is a quadriplegic, Steven is a blind man, and Anne is a woman struggling with Parkinson’s Disease.

Bill has a device implanted in his brain in hopes of reestablishing connections between his nerve cells, so as to restore his body’s movement. Steven undergoes an invasive surgery to have a chip planted behind his eye, so that he will be able to see the outlines of objects. Anne has wires put inside her brain which provide deep brain stimulation; these wires are controlled by a pacemaker in her chest.

For local Wichitan co-director and producer, Southern, the plunge into neuroscience was a no-brainer.

“I always had a fascination with how technology is impacting human culture. I’ve always been a tech nerd. I was obsessed with ‘Black Mirror.’ I thought, no one is following those people (with brain implants). There was a missing link between what was happening in the real world and these dystopian futures that were being portrayed,” said Southern.

The film is scientific and humanizing, with a narrative that bounces back and forth between neurosurgeons and the lives of ordinary people.

“When you’re talking to people who have lost something due to illness or disease, you realize how precious our brains are. Following these patients was awe inspiring and beautiful,” said Southern.

The film score is chilling and the shots often highlight the contrast between machine and human. For example, in several scenes the camera focuses on a close-up of Bill’s head, from which two industrial-sized screws rise up through his scalp. At various other points in the film, patients are virtually hidden, with wires and electrodes covering their heads. The effect is unsettling.

Without a doubt, a major thrust of the film is exploring that uncomfortable space where benefit meets risk. The film does a good job of representing the major players in the neuroscience arena, including corporations, businesses who are potentially in it for the money, doctors, and future patients. Ethical questions are raised by various experts, including: who is going to have access to these devices? Who will have access to your brain’s information?

These questions preclude horrifying bits of testimony from Facebook and Google employees, who imply they are interested in “mind-reading technologies.”

If you think this sounds like “Black Mirror” come to life, you are correct. If the film has a fault, it’s its ruthless foray into the terrifying unknown; an insistence on planting doubt and fear in the audience’s mind. 84 minutes of fear (albeit sprinkled with scenes of intense hope) is a few too many minutes.

Southern acknowledges that the film took a different direction than she anticipated.

Indeed, the most gratifying moments in the film are when the patients begin to see progress. The emotional climax of the film might be where Steven regains some of his sight. But these moments are quickly rushed past, with the tone and content of the film delving back into possible negative outcomes in the future.

“I Am Human” poses many questions but does not answer any. And that is no fault of the film: the future hasn’t happened yet. But what the film does well is to ask what if. The movie covers a lot of ground, and it leaves you both excited and suspicious of the future ramifications of brain technology. I think that was the point.